“Freddy! FREDDY!” Antonio’s voice jolts me from an accidental nap. Loud at first, it fades at the end as if he were falling over a cliff. Freddy picks up the walkie-talkie and says, “Antonio!” three, four, five times. No answer. 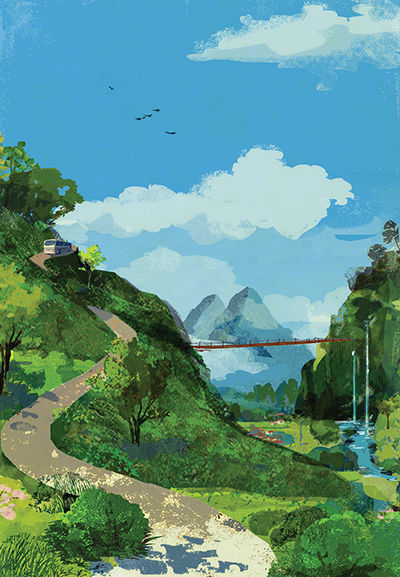 I am really awake now, sitting upright with my heart pounding in my ears. Oh God, I think, it’s happened.

For the past month I’d been holding my breath on our long drives across the Guatemalan countryside. In two white vans chauffeuring U.S. students, we wound around dark green mountains, dipped into chilly valleys, crossed bridges over roaring waterfalls. All without speed limits or guard rails.

Nine thousand feet above sea level, we’d race the chicken buses painted in crimson and orange and blue, packed full of tired locals looking through us. Our Guatemalan drivers would smirk as our eyes widened, playfully toying with us as we zipped through pedestrian towns, used to the speed and the shape of the streets. Pickup trucks teetered around, full of day fieldworkers standing in the bed holding onto the metal bar frame tenuously boxing them in. More than once a bus had pushed us to the edge of a shoulderless road, all passengers looking out the window down the cliff face while instinctively leaning the other way. Too much weight on one side would send us over.

Freddy turns our cargo van around, everyone silent. Antonio is his best friend. He’s leaning forward, hunched over the wheel and squinting. I look over my left shoulder at the teenagers in our back seat. I can feel their questions rushing toward me through their eyes, pressing the air against the windshield. We pass through a thick fog. We are in a cloud forest — close sister of the rain forest. We are in the highlands, west of Lago de Atitlan.

Nestled between volcanoes, the giant black lake was to be a weekend excursion for the high school students in the vans, part of their two-week service trip through an American adventure company. I was a mentor, a guide as they sorted through their feelings on abject poverty, what it looked like against their own comfortable, wasteful consumption, and what efforts their idealism would lead to back home. It was rewarding work. The group before this one had shown up, iPhones and Coach luggage in hand, demanding to know why their beds were so hard and where all the hot water was. By the end of their trip, these attitudes had been erased, if only in the moment: Many left a majority of their belongings behind with notes scrawled in Spanish and clearly defined instructions for me to give it all to a certain child at the orphanage.

A quick break in the cloud reveals a dense grassy hill out the window to my right, an old barbed wire fence trailing up the incline connected by rotting wooden posts. I can see nothing to our left, but I can feel the void, the drop-off, the gravelly mountainside. Its floor could be a town or a river or another mountain — most of the time it’s covered by a down blanket of cumulus puffs. We drive on. I have no concept of how many minutes or seconds or decades have passed since Antonio’s staticky prayer. Freddy slams on the brakes.

“Dios mio,” he whispers, and I see what he sees. A group of people standing in the road, blocking traffic on both sides, growing as villagers come out of shacks and down the hill. I see men in worn jeans and boots, pushing up against each other, their backs toward us. I see women in white blouses and long rainbow skirts, Mayan trajes, wringing their hands and standing on tiptoes to see. Their woven baskets of fruit and grain are discarded on the hillside. I don’t see our other van. I don’t see the van.

I don’t see the van.

In lightning Spanish Freddy tells me to follow him, we have to get the kids. He flies out the door and I immediately lose him — a Mayan needle in a Mayan haystack.

I turn around. “Okay, we’re okay. Do not get out of this car. When I get out you lock the doors behind me, understand?” I tell the seven students staring at the ever-growing mob outside. I twist the keys that Freddy left in the ignition and the engine shuts off.

“Listen to me, do not open any of these doors, do you hear me?” I say it louder. I make eye contact with Becca, a confident, overachieving junior from New Jersey. She nods furiously, eyes round as her open mouth. Somewhere in my gut I believe that she will follow my rules. I turn back around and scan the crowd one more time. I see no Freddy.

I open the door, nearly hitting a man running past me. I smell burnt rubber and a metallic tang I don’t recognize. I slam the door shut and look at Becca one more time. She crawls to the front and locks the doors. Good girl.

I can’t breathe — the crowd, the dread and the altitude have all gathered to sit on my chest. I suck in one big gulp of thin air and push into the mass, the multicolored living wall. The crowd’s high-pitched shrieks and low Latino hum blend together into one growling note. A teenage boy squats on the hillside in an oversized T-shirt and athletic sandals, elbows on his knees. A lone bird is perfectly still in a leafless ceiba tree, and for a half-second I am excited that I’ve finally seen a quetzal. As I get closer it’s not a quetzal. I am pushing people — men, women, even children — out of my way. I am tall next to them in their malnourishment, but I still can’t see. It’s just jet-black hair and cowboy hats and textile headscarves, cintas. There must be a thousand people here somehow. I keep pushing.

Suddenly I can see one of those metal-bar-framed flatbed trucks, tipped on its side, bed empty. There are people sitting on the ground, some dazed, some angry, some bloodied. It’s a series of stills: one Guatemalan man with holes in both knees of his jeans slowly shaking his head; a somber-faced woman staring through another woman who is standing directly in front of her and yelling; one small child on each side of a teenage girl, both holding one of her hands, heads tipped back and mouths open, sobbing in unison.

Freddy is at my side, pulling my left arm. We weave through people and cries and more pushing and finally come to the van. A waterfall of cool, goose-bumped relief floods my body, and I’m dizzy. I take a breath and watch Freddy run to Antonio, who is on the phone, head down, pacing in front of the van. I follow. The windshield is a spider web of cracks, and the white hood is crumpled. Smoke or steam or some kind of vapor is billowing up from under it, and the van is perpendicular to the yellow dividing line in the road. I can’t tell what happened by the smashed vehicles and the angles of the people flung around.

The side door of the van is open, and everyone is yelling. All eyes are on me — some tear-filled, some blank and shocked, some seemingly confused that I just appeared out of the smoke. One of our boys is cradling one of our girls, and I have an absurd thought that he’s broken the “no physical contact” rule and we will have to write him up for that. Julia, my fellow mentor, turns around from the front seat where she’s barricaded in. “Get them out of here,” she says, calm and stern and terrified at the same time.

It took one second for one of our vans and a flatbed truck to collide that day. Just one second to change those lives. To lose a life. One second to know somewhere in my soul that I changed, irretrievably, in more ways than one.

It took one second to steal and bury the innocent curiosity that brought me abroad in the first place. One second to illuminate the chaos of a developing country, the dangerous isolation of no infrastructure.

It took just one second for a new, unbridled respect for first responders to bloom within me. One second to prove that I can also trust myself to take action, to know what to do and to follow my first aid and medical training. That same second to know that I never want to have to utilize such training again.

It took one second to change the course of my life, but I was lucky.