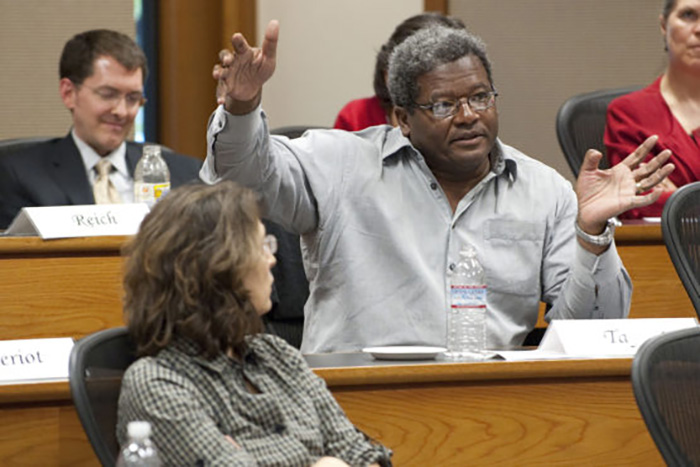 Ken Taylor ’77, Stanford philosophy professor and the first African-American graduate of Notre Dame’s Program of Liberal Studies, died December 2 at the age of 65 from a probable heart attack, according to his wife Claire Yoshida.

Born and raised in Sandusky, Ohio, Ken fell in love with philosophy as an undergraduate and earned his doctorate in philosophy from the University of Chicago in 1984. A highly esteemed teacher, he was the Henry Waldgrave Stuart Professor of Philosophy in Stanford’s School of Humanities and Sciences since 1995 and the founding co-host of the long-running, syndicated radio program Philosophy Talk. Known as the show that “questions everything, except your intelligence,” it was broadcast in several countries on more than 100 stations.

At Stanford, Ken was remembered as “a dedicated university citizen,” having served as department chair, as a faculty senator multiple times, as a doctoral student advisor, and as director of multiple programs. He was also the author of numerous articles and three books, with a fourth on the verge of being submitted, as he told friends on social media the day he died.

Ken was wholeheartedly dedicated to what he called “the art of living,” that is, to “learning how to navigate a distinctively human life.” As he put it in a 2013 interview: “Our lives are given to us as a series of questions. To live well and authentically, we have to set about answering questions such as ‘Who shall I be?’ and ‘What allegiances shall I cleave to?’”

Below, four of his Program of Liberal Studies professors remember the “intense, probing” student who became a distinguished philosopher:

What seems to me to be my most relevant remembrance, especially after reading the autobiographical statement Ken wrote as one of the 10 most outstanding graduates of PLS who spoke at our 50-year reunion was this: Ken came to us appearing to many around him as almost totally lost in terms of what he might do for a career. He had taken courses in engineering and many other areas, including mathematics and psychology, taking these courses seriously but still somewhat lost. One might think that PLS would be the worst major for such a student, ending up with no clarity as to what he should do for his career. He came into PLS, somehow found his way, and then pursued that path achieving a high level of success for the rest of his life. —Michael J. Crowe ’58

This is how I remember our beloved and brilliant Ken Taylor: always with his hand up in class, always with that curious, questioning look on his face. He would shift a little in his chair and make a stab at what was on his mind to say. Then he would formulate it several more times in questions, one after the other, until he felt he got it just right. And he would listen hard, to his classmates, to his teachers, to whomever could shed some light on what it was he wanted to know. He wouldn’t give up, though he might lean back in his chair, fold his arms, and continue with that perplexed look on his face. He would ask questions about everything. Requiescat in pace.  —Katherine Tillman

One very clear memory I have of Ken was his inviting myself and my wife Elaine — and at least one other faculty couple — to dinner at the South Bend flat that he and his closest friends occupied in their senior year. Those friends were the late Rich Spangler ’77 and Dave Carlyle ’77, both of whom became medical doctors. The three of them clearly enjoyed cooking that evening and were seeking out conversation, not so much on the great ideas we all pursued in the classroom as on our personal stories of how we came to pursue the life of a scholar-teacher and to live the family lives we did. This was an unusual event; sufficiently so to get a sitter so we could both be present. One gets accustomed to such invitations now and then from graduate students, but I don’t recall another from undergraduates. Besides the conversation, which they pushed to the late hour of the night, they wanted to express their gratitude to PLS faculty who then often invited students to their homes for classes, seminars and refreshments of all sorts. —Walter Nicgorski

As a student who had migrated over to (PLS) from the College of Engineering, Ken was very attracted to the science-related courses of our natural science tutorials, and showed particular interest in my Darwin unit. He had this intense and even worried aspect to his questions that eventually flowered in his senior essay with me on Kant and Darwin. I recall well how his face screwed up in our discussions, especially over Kant; the thought processes were working hard.

At his graduation breakfast, his mother and father were understandably uncertain about how this first-generation college student was going to fare as a philosopher rather than as an engineer. As one implication of this career choice, I told Ken at that time to take good care of the new suit he was wearing for graduation because he would likely need it to last him a long time! When I saw him some years later he commented that this was indeed good advice.

In conversations together when he was first immersed in philosophy at the University of Chicago, he described happy and serious encounters with contemporary analytic philosophy, where in many respects he remained professionally. But he never lost his interest in a larger vision of philosophy acquired in the program. I first heard his Philosophy Talk program on NPR driving across Oregon some years ago, and the topic was Hegel and German idealism! Ken remains one of the most memorable students of my early years of teaching in the program — intense, probing, concerned to get clear on things. I am honored to have been one of his teachers. —Phillip Sloan