“Lend me your ears!” the students shout back. 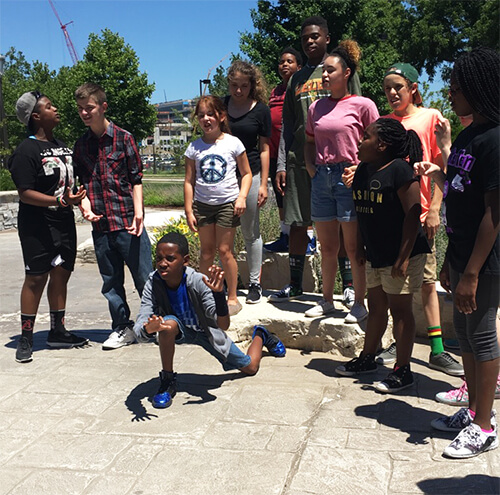 It’s one of Shakespeare’s most memorable lines — the beginning to Mark Antony’s famous monologue in Julius Caesar.

It’s also the call-and-response Christy Burgess uses to quiet down the Shakespeare summer campers at the Robinson Community Learning Center, a Notre Dame outreach devoted to education in the South Bend community. And it’s one of the many ways that Burgess helps students from third to 12th grade bring Shakespeare to life.

“Shakespeare is a positive risk,” says Burgess, founder and director of the Robinson Shakespeare Company since its beginning in 2008. “The students realize that if they can do Shakespeare, they can do anything.”

Burgess takes this philosophy to heart. Her young actors can do far more than simply read lines off a page. From the start, she has them learning iambic pentameter and scansion — the analysis of verse to show meter — even though most students won’t study these concepts in depth until high school.

“All it takes is having somebody take the time to explain what iambic pentameter is, to really dive into the facets of the language,” Burgess says.

And when she does, Burgess makes such a daunting task look easy.

“This is the rhythm to the lines,” she tells campers, tapping out a one-two pattern to mimic the unstressed/stressed meter of the Bard’s words. “It’s a heartbeat. It’s the first sound we hear in our lives.”

Soon, the students are all mimicking heartbeats as they create sentences in iambic pentameter about their favorite foods.

“Have you ever thought about ribs? I have,” one student ad-libs.

Still, Shakespeare’s language is only one small part of what these students learn at the Shakespeare summer camp. Morning yoga, for instance, becomes a way to master good posture, proper breathing and patience.

“Don’t get frustrated,” Burgess counsels during a difficult pose. “Recognize where you are. Where you are today is not where you’re going to be tomorrow, or at the end of camp.”

And when the focus shifts to running scenes for a performance of Henry V, the students don’t wait for someone to tell them what to do, but begin building characters and blocking their movements on stage. As when a young Henry declares he should “move with purpose” as he practices delivering a threatening ultimatum to a besieged French town.

Perhaps the most important thing the Robinson Shakespeare students learn is how to build a supportive community among a diverse group of students of all ages, socio-economic backgrounds, races, and religions. This community finds its roots in what Burgess and her campers call the “ensemble.”

“Ensemble is family,” says Rylee Fleming, 10, a veteran performer of four Robinson Center Shakespeare plays. “Even though it’s not biological family, it’s people you can trust.”

“Ensemble is something that you can’t have outside of this place. It’s a stronger connection than I’ve ever felt,” says Precious Parker, 15, who plays the French Dauphin in Henry V. “It’s never negative in any way.”

Parker says being part of the ensemble gives her confidence onstage. “Even if you mess up, that feeling of love doesn’t go away. I like that I could mess up and still feel like I didn’t.”

“There’s no judging,” Burgess explains. “You just have to be yourself. Everyone has each other’s backs. I know it’s easy to say that, but here, it’s a reality.

“That’s the takeaway. Shakespeare and this program — they make the students comfortable with the language, with others and with themselves.”