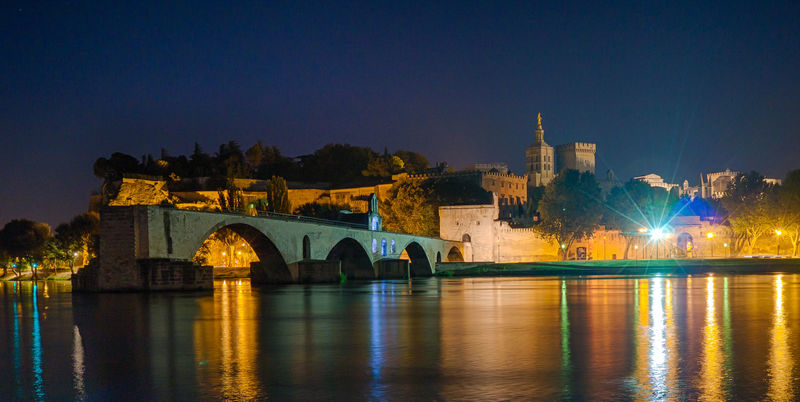 Nearly 40 years ago, my mom took a step off the edge of the world. Off the edge of her world, at least. My mother, who had grown up on a small family farm in central Illinois, spending childhood summers road tripping in her family’s station wagon and earning 25 cents per row of weeds pulled from her family’s cornfields, boarded a flight by herself at O’Hare and headed toward the small French town of Avignon. Her only connections to France were her last name — LeSage — and her annual family reunions in the unsuitably-named Paris, Illinois. She was 21 years old and had never flown on a plane, let alone left the country, but with passport in hand, she left behind everything she knew to go learn.

Despite her lifelong dream of becoming a teacher, one high school counselor’s bad advice led my mother to take several semesters of marketing courses in college. By the time she realized that she really was meant to teach, she had enough credits in her French minor to be able to teach the subject. A bit of coincidence and a bit of luck led her to that first summer in Avignon in an effort to become somewhat fluent before graduation.

My childhood was remarkably different from my mom’s. I grew up in the middle of Chicago, about the furthest you can get from farm life. I traveled extensively, both with and without my family. I couldn’t even count the number of planes I’d been on before the 20th summer of my life when it was me at O’Hare with passport in hand, and my mom tearing up as she sent me off to study in the exact same place where she had jumped all those years ago with the hope that someone or something would catch her.

I’d even been to France before that. We went as a family the summer I turned 14 on the trip my mom had always dreamed of. A combination of preteen awkwardness and the stubborn resistance my sister and I showed toward learning the language — along with my dad’s complete inability to remember a word of French — drew a line in the sand on that trip. For us, it was a vacation, but for her, it was a triumphant and nostalgic return to a place that had been home once upon a time. 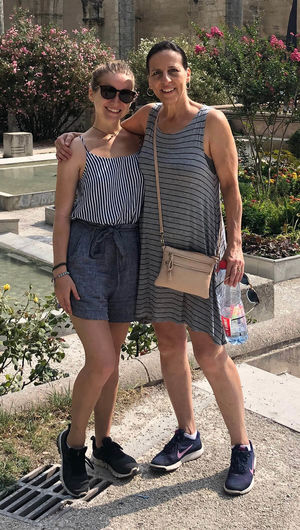 The author and her mom in Avignon.

After my travels from the previous few summers, she had become used to crying just outside the security line, but this time felt different. I don’t necessarily believe that symbolism and motifs show up in our messy human lives, or that narratives purposefully weave themselves through the random entropy of our relationships, but I have to say this felt “full circle” for the two of us. I didn’t have to jump blindly the way she did, because she was the net. My mother, who had worked so hard and leapt so far out of her comfort zones, had given me everything she learned during those years; I was simply fulfilling a plan that went into action 20 years earlier.

When I came into the world right at the end of the 1998-99 school year, my mom quit her teaching job, but by no means did she stop speaking French. She raised my younger sister and me in a bilingual household. During the day, when my dad was at work, we would speak French around the house.

My level of fluency fluctuated throughout childhood, at its highest before starting preschool and increasing again when I studied French in high school. But throughout those middle years of linguistic laziness, during which I responded in English and grew frustrated by continued weekly French lessons, my mom persisted in giving me one of the greatest developmental gifts a child can receive: the ability to comprehend another spoken language. For many older language learners, understanding native speakers is one of the most difficult parts of the acquisition process, but despite my childish refusal to make the mental effort to translate aloud, I was always surrounded by the language.

The many benefits of bilingualism have long been hailed by experts and parents alike throughout the United States, but when I tell people I’m studying French, I’m met with confusion more than any other reaction. In a world filled with students studying Spanish and Mandarin to have a leg up in an ever-globalizing employment market, French has the reputation of an ornamental language — nice to have, but not particularly useful. The focus in American schools on studying language as a marketable skill, rather than as a different way to think and learn, has pushed aside appreciation for languages considered less “useful.”

I took a mandatory eight years of Spanish in grade school, where a reliably revolving door of teachers ensured that we learned the same basic classroom vocabulary year after year. My mom put me through a perfunctory few weeks of Mandarin because she thought it would help me, but all I remember are the words for “hello” and “thank you.”

I do not speak French for a leg up. It will likely not help me make more money or get a better job or close any deals. I do not plan to be an interpreter or an ambassador. Aside from not needing a translation when the gilets jaunes protests made international news, I don’t think that my specific form of bilingualism can be translated into social and workplace capital. French has simply been a part of my life for as long as I can remember, and a part of my life it remains.

When I began at Notre Dame, I had enough room in my schedule to declare a supplemental French major, so I did, my primary reason being, “Why not?” I had been around the language my whole life and I wanted to improve. I had no idea how much my second major would make me fall in love with learning. French is my “Notre Dame major” — I have no plans to use it in my career, but I didn’t come to school here to painstakingly construct a career path with each class I took. I came here to learn.

I study French because it reminds me that not everything I do has to be for my vocational advancement, for making money, for augmenting my skillset. Instead, I learn because I love. I love the way it feels when I speak the language, when I can get out a sentence in the past-conditional tense on the first try, when I read something in French that simply could not be translated into English without losing its spirit.

French is this huge part of my college life that, despite being part of my studies, has nothing to do with “studies.” It has to do with life, with learning for its own sake, with broadening my soul.