A whole day and a half has passed since deadspin.com published its troubling report and I don’t have much worthwhile to say about Manti Te’o ’13 and the Lennay Kekua hoax. Judging by everything I’ve read so far of this sad episode, no one else who writes for a living does, either.

It’s not my job to sling opinions about this matter. It is my job to try to find out what happened and to think how Notre Dame Magazine might add something valuable to the reporting of the story. So I’m building a file and gave a few hours yesterday to reactions on news sites, the Twitter feed, sports talk radio, wondering what questions need answers for this picture to start making sense.

I listened to that voice in my head as it repeated a wise rebuke I once heard about a Tarheel dad giving to his daughter whenever she ran off at the mouth: “Sweetheart, you don’t know enough to talk.”

If there’s one thing we excel at in the 21st century, it’s running off at the mouth. Opinions are cheap. Everybody’s got one. So my file so far has little of value beyond the verifiable facts reported on deadspin (there is no Lennay Kekua) and what we learned from Notre Dame’s athletic director Wednesday night (Notre Dame hired private investigators and has concluded that Te’o is a victim of a cruel deception and the school is standing by its man). 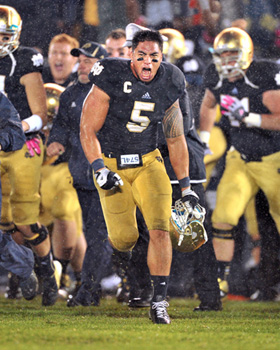 It’s likely we won’t learn much more until Te’o himself takes questions. We don’t yet know enough to talk. But we sure have lots to say.

The irony alone should stop our mouths for half a minute if nothing else will. After all, how did we get here? Well, people started talking before they had something true to say. A girl dies, her story grabs the national spotlight and not one person — no reporter, no editor, no fact-checker, no enterprising college intern, no skeptical blogger — thought to check the obituaries, the accident report, the school she attended, until someone sent the guys at deadspin a tip — three months after the fact.

Wednesday morning, oblivious to the news that would break in the afternoon, my wife and I were talking about the baseless fictions passed off as facts in the hours after the Newtown massacre. We marveled once more at how news reporting in the age of the dying daily newspaper and the blogosphere evokes the spread of rumors on the wild frontier. The quaint old rule of confirming facts with two reliable sources before reporting them is nothing more than a quaint old rule.

Haven’t we learned anything?

Nope. Day two of the Manti story was full of analysis pieces that read more like gossip sheets, self-righteous I-told-you-sos, silly speculations about Te’o’s psychology, rehashed columns lumping the hoax onto the pile of unverified and self-perpetuating Notre Dame scandal allegations. One reporter scolded the University for sitting back and letting the media write its romance — as if to suggest that journalists have no more important social role than repackaging hearsay, that story subjects are now responsible for the fairness and accuracy of the journalist’s work, that finger-pointing is a more productive exercise than picking up the trail and following a big (and true) story.

Make some room now for Gothic novels on the romance shelf.

I want to believe Manti — for a lot of reasons, some of them admittedly self-serving – even though that would mean this is just a story about a young man and a family humiliated by that part of the spotlight that was just a little too bright for them to bear.

The point is, it doesn’t matter what I believe. What matters is what happened, what didn’t happen and who knew what when. There’s more to this story than what a pair of investigative reporters can turn up in one week, and there’s a name for that kind of writing, too.