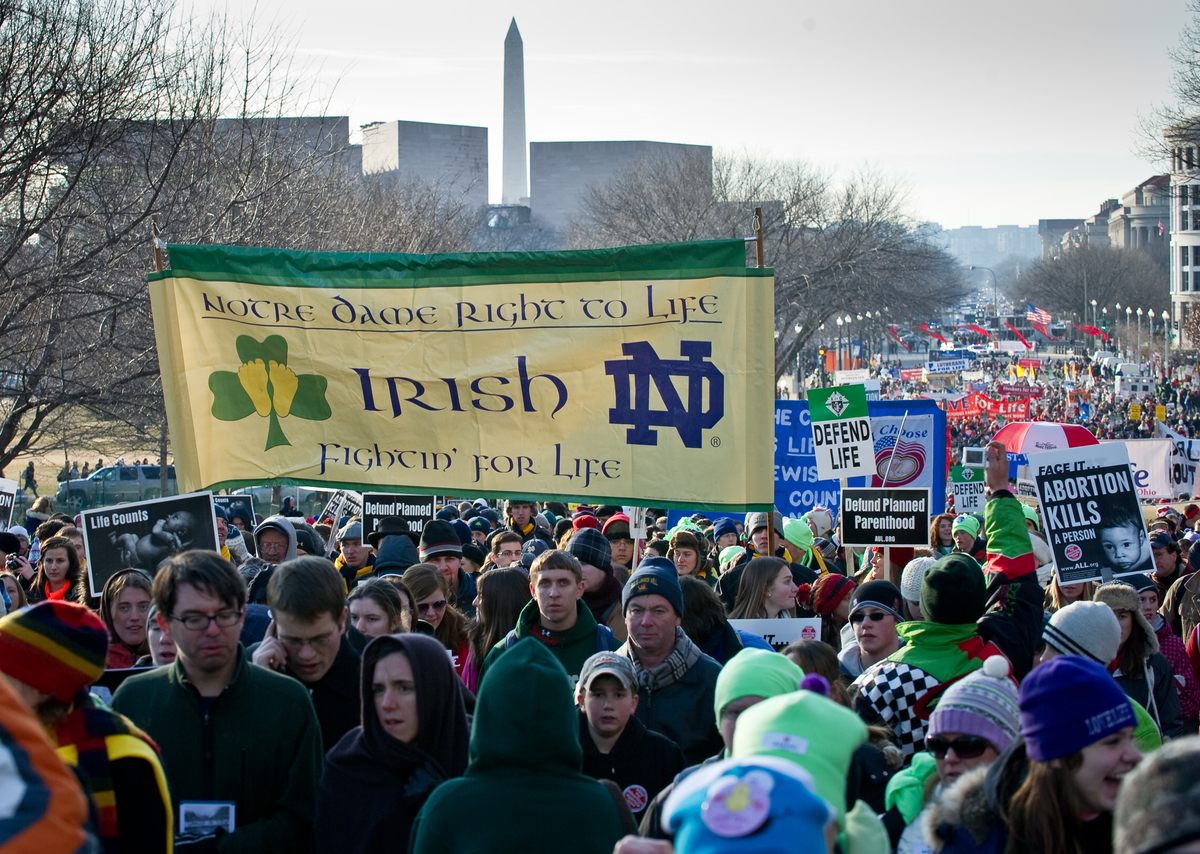 A record number of Notre Dame students traveled to Washington, D.C., this week for the annual March for Life.

The trip to the nation’s capital culminates a week of campus observances of the 40th anniversary of the Supreme Court’s Roe v. Wade decision, which uniformly legalized abortion across the United States when it was handed down on January 22, 1973.

ND marchers received a blessing Tuesday at a sendoff Mass that Campus Ministry organized at the Basilica of the Sacred Heart. Campus ministers have also encouraged students participating in Eucharistic adoration at the Basilica and the Coleman-Morse chapel to pray this week for greater respect for human life.

Jen Gallic, president of ND Right to Life, says 600 students are attending the March today — nearly doubling the previous high mark set in 2012 — along with 100 members of the faculty and staff and their families. Most are traveling aboard a dozen buses departing campus in two waves Wednesday and Thursday.

Meanwhile, March organizers have invited 50 representatives of the Notre Dame Right to Life club to carry the official event banner that traditionally spans Constitution Avenue as the March proceeds from the National Mall toward the Supreme Court.

Forecasts calling for a high of 29 degrees and snow showers do not seem to have daunted plans for the March, which has drawn about a quarter of a million people in recent years, news sources say. Organizers are predicting a turnout as high as 400,000 people.

Such an attendance jump would parallel the number sent from Notre Dame as well. Gallic says several factors have helped boost numbers, including the significance of the anniversary year, an ad campaign, a more robust lineup of club events through the autumn semester and a registration drive that began months earlier than usual.

Gallic, a junior economics major who grew up the third of seven children in a Roman Catholic family in Gillette, New Jersey, says the national organizers’ decision to shift the March from the anniversary date this past Tuesday to Friday in order to avoid conflicts with Monday’s presidential inauguration also helped by giving students flexibility to schedule their travel around their classes and possibly miss one fewer day.

The biggest difference, she believes, is the student club’s expanding emphasis beyond its anti-abortion stance into activities that build a “culture of life” — a phrase commonly associated with the late Pope John Paul II. ND Right to Life members, for instance, volunteer at local organizations that support senior citizens, people with severe disabilities and women facing crisis pregnancies.

“Coming to Notre Dame and working with the club, you really find that the people who are most passionate about being pro-life . . . uphold the dignity of all humans,” she says. “That’s what’s at the core of the pro-life movement — that every life is priceless.”

Turnout aside, the number that abortion protesters have most in mind this year is the estimated 55 million abortions performed in the United States since 1973, according to the Alan Guttmacher Institute.

The consequences of American abortion jurisprudence was the subject of “_Roe_ at 40: The Supreme Court, Abortion and the Culture War that Followed,” a presentation that ND law Professor Amy Coney Barrett made in South Dining Hall’s packed Oak Room January 18.

The talk kicked off the spring “Professors for Lunch” lecture series co-sponsored by the Tocqueville Program for Inquiry into Religion and American Public Life and the Constitutional Studies Minor program.

Barrett reviewed the debate over the Supreme Court’s “institutional capacity” to resolve divisive questions like the legality of abortion. A constitutional law authority and mother of seven who clerked for Associate Justice Antonin Scalia, Barrett spoke both to her own conviction that life begins at conception and to the “high price of pregnancy” and “burdens of parenthood” that especially confront women before she asked her audience whether the clash of convictions inherent in the abortion debate is better resolved democratically.

By creating through judicial fiat a framework of abortion on demand in a political environment that was already liberalizing abortion regulations state-by-state, she said, the court’s concurrent rulings in Roe and Doe v. Bolton “ignited a national controversy.”

Barrett noted that scholars from both sides of the debate have criticized Roe for unnecessarily creating the political backlash known colloquially as “Roe Rage,” a dynamic that has since affected everything from federal and state elections to the federal judicial nominations process.

Abortion opponents have found success in recent years passing and defending abortion restrictions such as informed consent laws, ultrasound requirements and the federal partial-birth abortion ban after rulings in Casey v. Planned Parenthood (1992), Carhart v. Stenberg (2000) and Gonzales v. Carhart (2007). But Barrett believes it is “very unlikely” the court will ever overturn Roe’s core protection of abortion rights, and sees the political battle shifting toward matters of public and private funding.