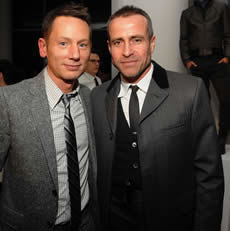 Following Thom Browne’s January fashion show in Paris, The Washington Post mused that it had divined his inspirations: “preppy style, S&M, and possibly, the TV show The Munsters.”

And Browne ’88, one of the pre-eminent names in men’s clothing, certainly did put the “show” into fashion show this year. Models paraded down the runway with exaggerated shoulders or spiked masks, donning pastel pink and green suits, and clothes dotted with ducks, dogs and safety pins.

Whereas some people might see his recent show only as the early costuming for “Nightmare on Martha’s Vineyard,” GQ saw “wearable looks beneath the grandeur: neat scarves and ties, a tipped navy blazer, nautical sweaters, and dependably smart shoes, in particular, proved that no matter the shape, it’s all about fit.”

Browne is most associated with a gray-suiting style reminiscent of the 1950s and ’60s, with shrunken jackets and trademark trousers that flash plenty of ankle.

“The core of my collection begins with the basic gray suit that I have become known for, but my intention is to create collections that provoke people’s minds and to make people think,” Browne said recently via email. “But every season I try to do something different.”

Browne won the 2010 Most Influential Designer in Menswear Award at the WGSN Global Fashion Awards. He has a high-profile collaboration with the iconic Brooks Brothers label, and Michael Hainey ’86, deputy editor of GQ, believes Browne was a key part of America’s recent resurgence on the international style scene.

“It was so new to the eye: ‘Yeah, that’s what a man should look like right now,’” Hainey said. “For a long time, American style, American fashion, was following the Europeans.”

Despite the volume and rapidity injected into the clothing world by the Internet, Browne maintains a distance from magazines, blogs and the work of other designers.

“I just concentrate on my own collections,” he said. “I don’t follow trends. My intention is to make people realize that one does not have to feel confined to trends.”

Browne has said before that in our current dressed-down culture, suits are anti-Establishment. Not surprisingly, then, his own definition of style is “someone who has confidence.”

“But I do believe that one is what one wears. It should reflect that person’s individuality,” he said. “They need to figure out what works for them, and have the confidence to stick to it.”

Liam Farrell is this magazine’s alumni editor. Email him at lfarrell@nd.edu.