Long before we knew what a historic year 2019 would be for the Notre Dame leprechaun, University photographer Matt Cashore '94 and Notre Dame Magazine editor Kerry Temple '74 decided something: This year, the magazine should take an inside look at the auditions that produce our green-hatted mascots.

Cashore brought his gear to the tryouts and captured all the action as Samuel Jackson, Lynnette Wukie and Conal Fagan became the 2019-2020 leprechaun squad. Wukie will be the first woman in the role, and Fagan, who is entering his second year on the team, is the first native-born Irishman. Wukie and Jackson are also Notre Dame's second and third African-American leprechauns. Get a glimpse of the start to their history-making season below. 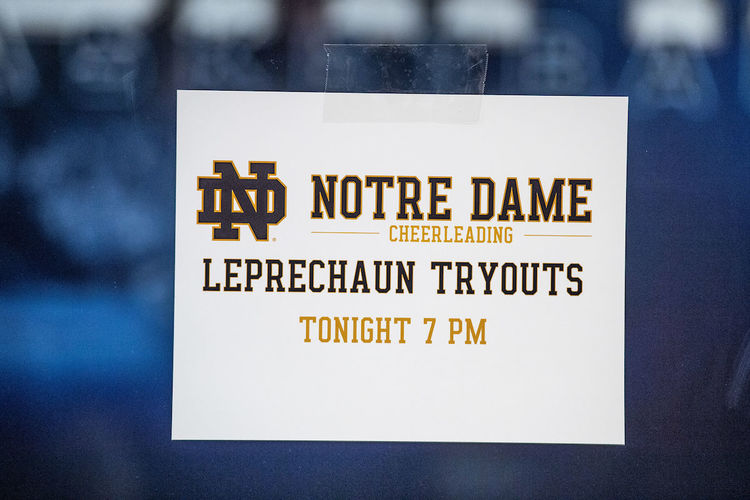 Due to increased demand for the leprechaun's appearance at events, the auditions this year (held in The Pit at the Joyce Center) were for three leprechauns: Gold, Blue and Green. 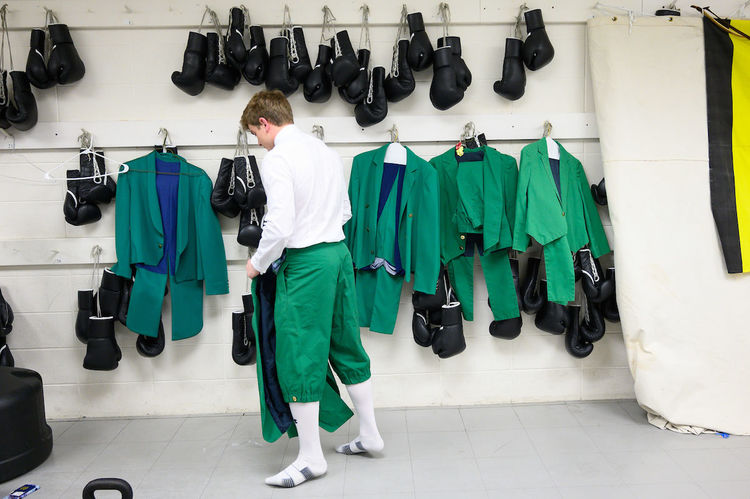 Suits can be custom-tailored for each leprechaun once he or she makes the squad, but at the audition, they are borrowed, leaving the contestants to choose the best fit for themselves. Here, Patrick Johnson chooses a suit from the makeshift dressing room in the boxing gym. 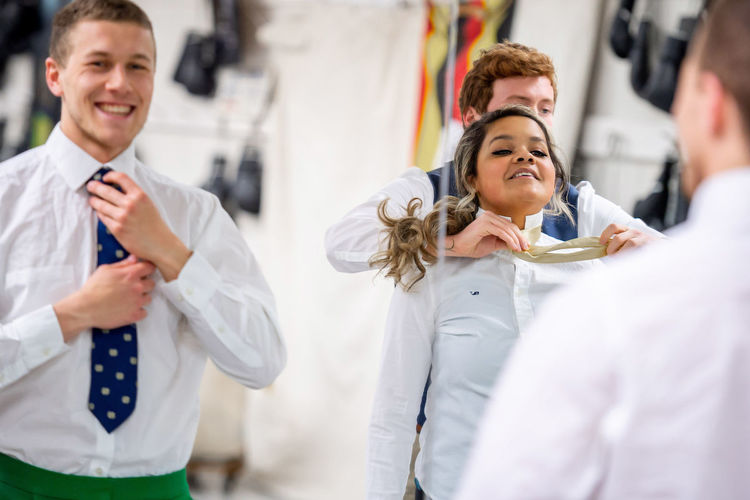 Conal Fagan, left, gets dressed as Wiett Sills helps Lynette Wukie tie her necktie, a skill she had not had much practice with in everyday life. Fagan was one of the three 2018-19 leprechauns but had to audition once again to keep the job. 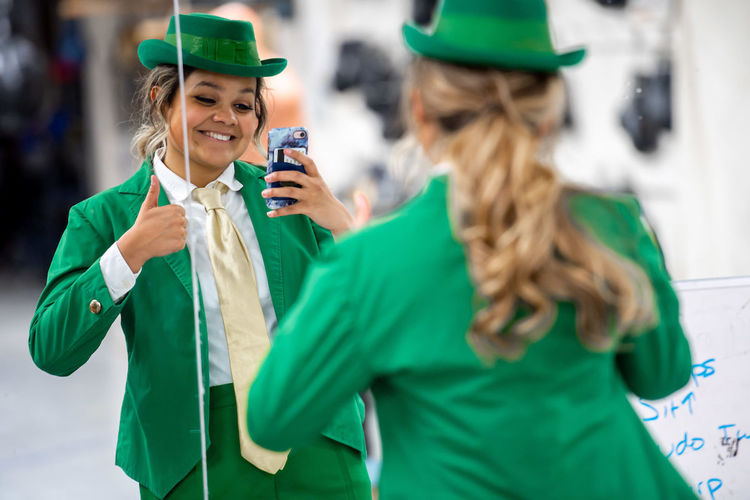 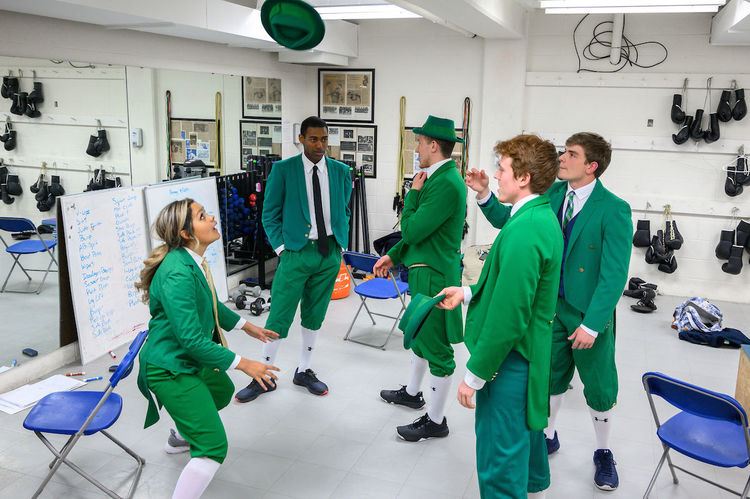 The five contestants loosen up before the audition. 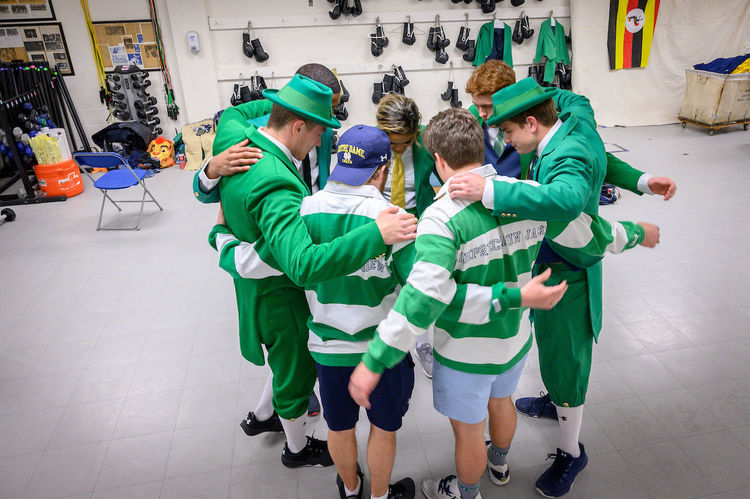 The five contestants have a private moment with 2018-2019 leprechauns Andrew Bub (in blue hat) and Jack Sheehan. 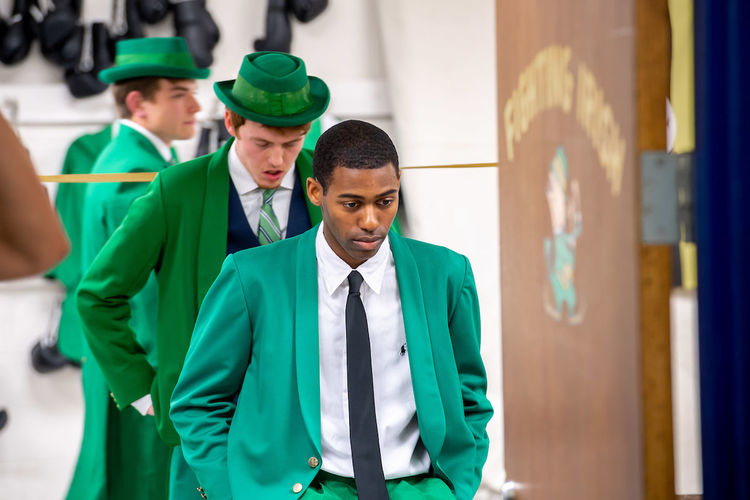 Samuel Jackson gathers his thoughts moments before the start of the official event. 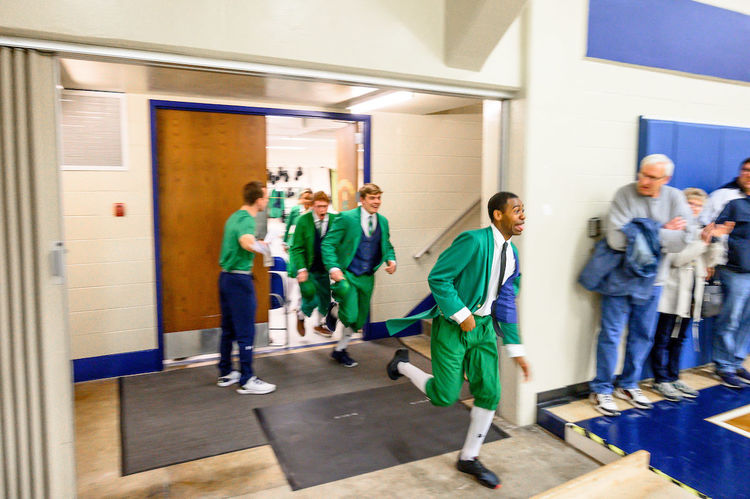 All five contestants enter The Pit to audition before a panel of judges and a live audience. 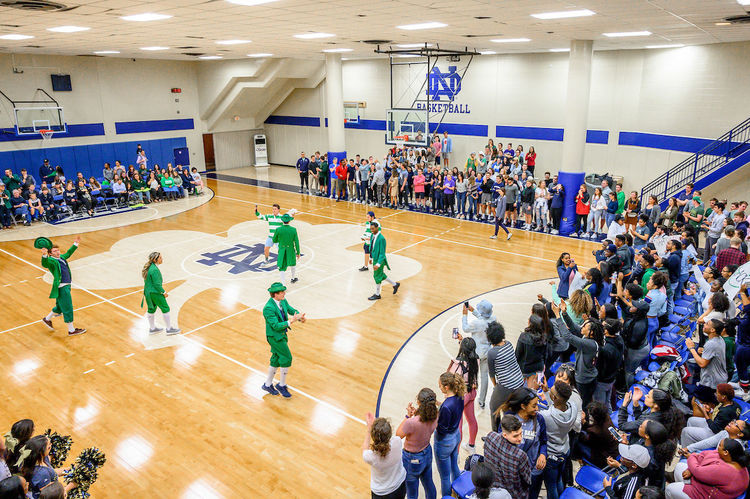 The audition is held the evening before the annual Blue-Gold game and is open to the public. Hundreds of fans and friends attend. 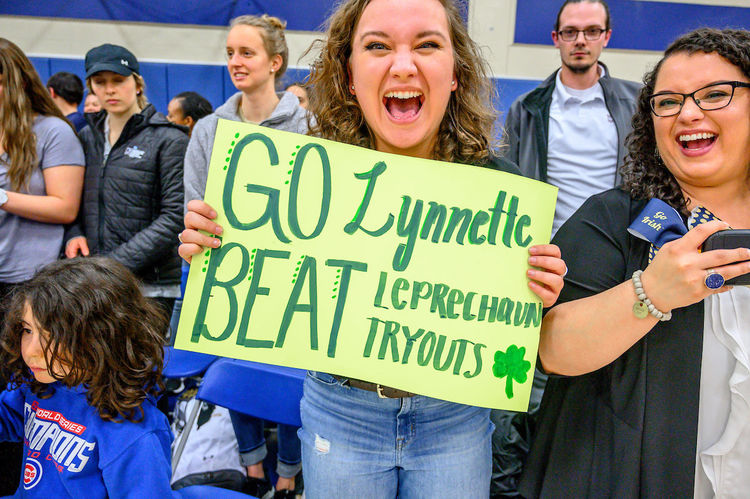 Above and below, friends hold signs supporting their favorites. 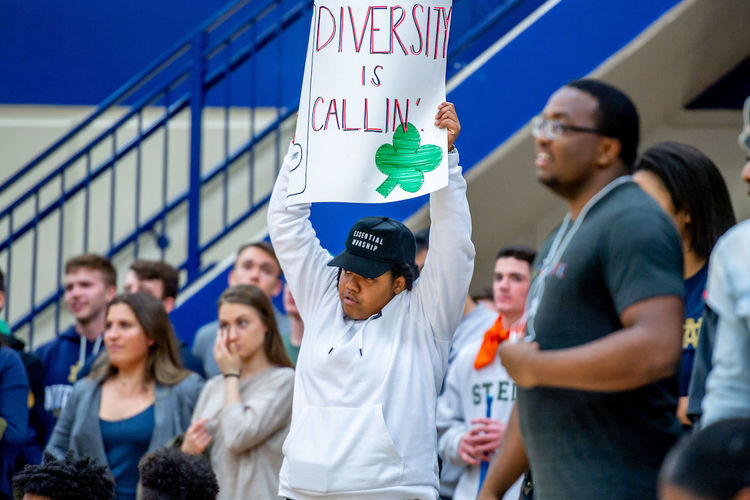 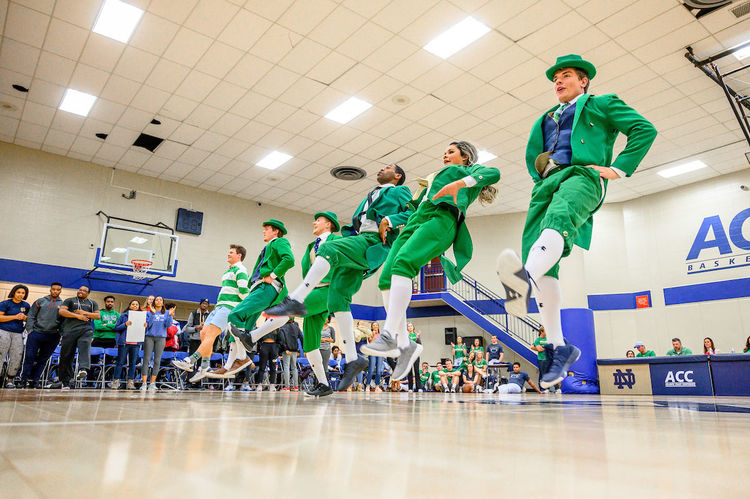 The tryout starts with all five contestants together. 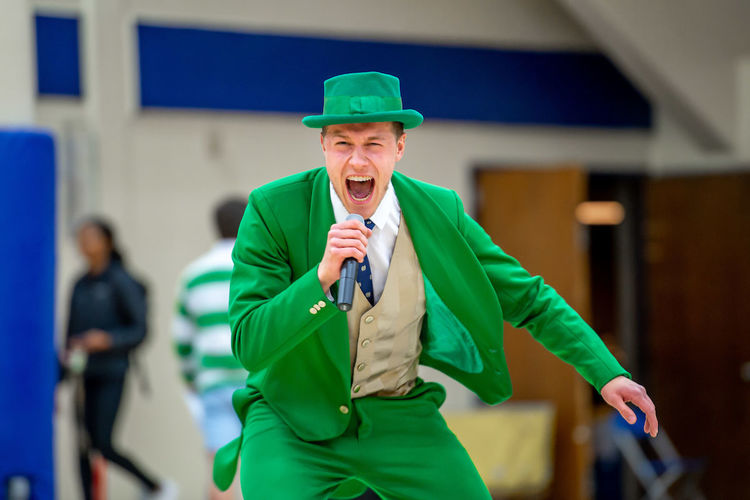 Next, each leprechaun contestant was asked to lead a pep rally while the other contestants were sequestered in the dressing room. Conal Fagan was first in line. 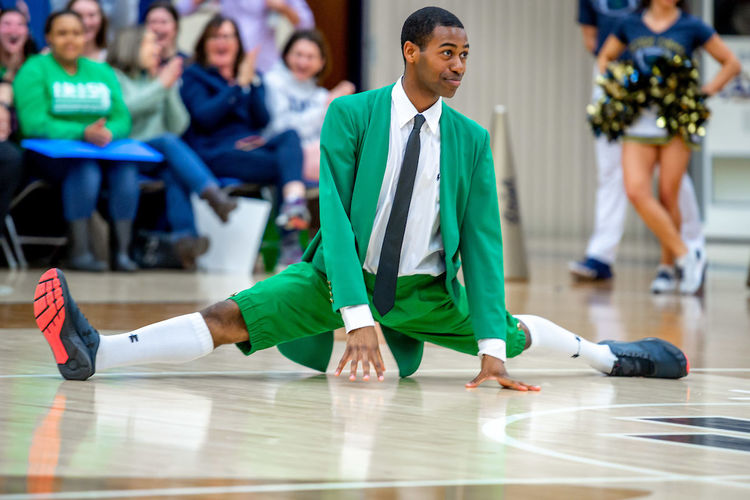 During his pep rally, Samuel Jackson showed off the skills he has acquired through formal ballet training. 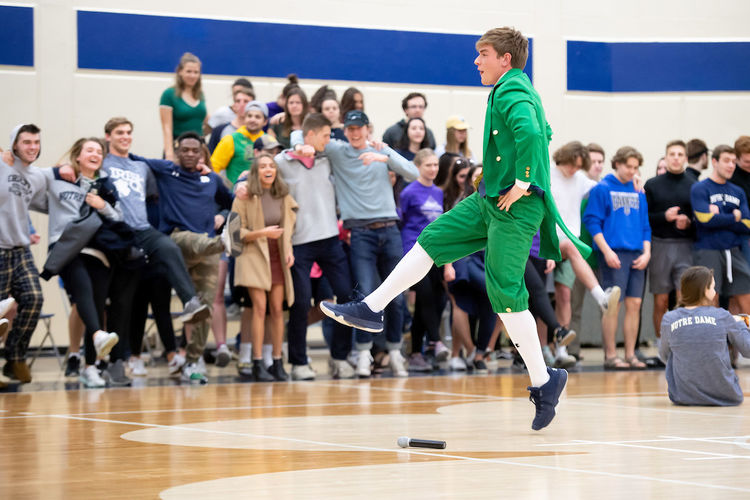 Patrick Johnson leads the crowd in the Irish jig. 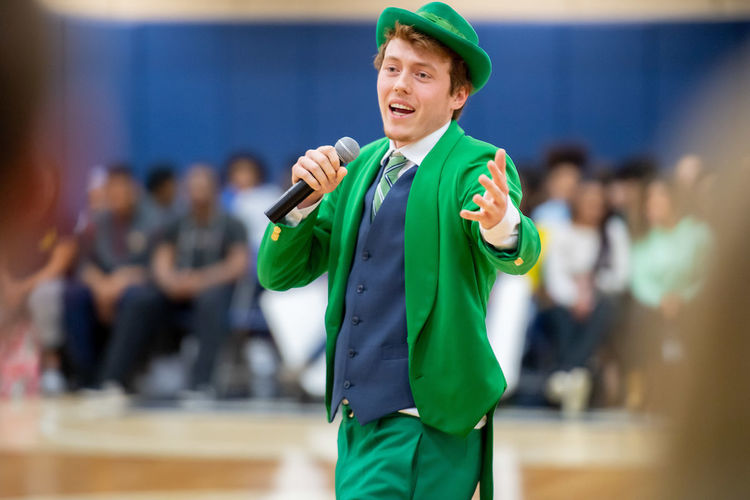 Wiett Sills engages with the audience. 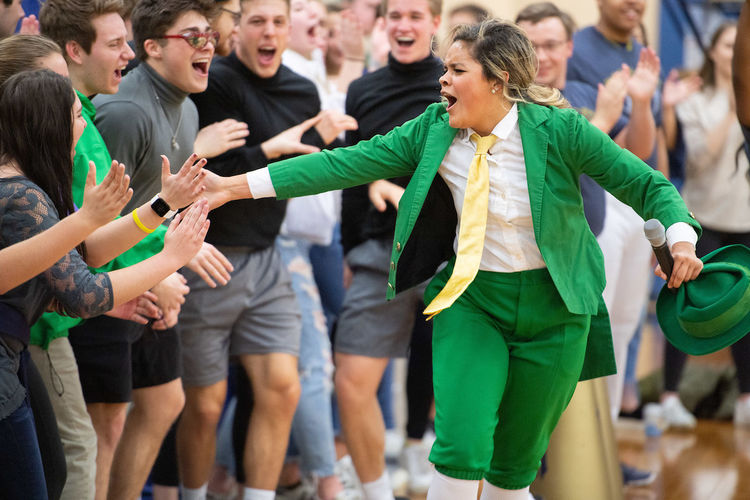 Nearly an hour into the event, Lynette Wukie was the last of the five to take her turn pumping up the crowd. 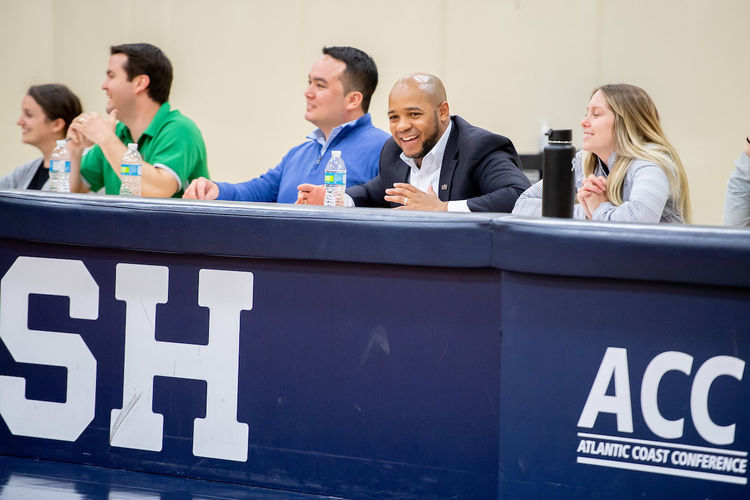 Judges included head cheerleading coach Delayna Herndon (right) and Mike Brown (second from right), who held the leprechaun title from 1999-2001 and was the first African American in the role. 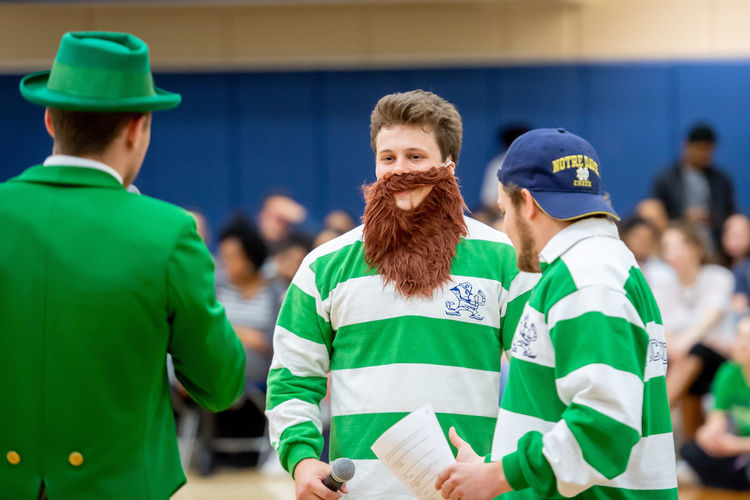 Ability to think on one's feet while remaining upbeat is a key component to the highly visible role of leprechaun. Here, 2018-19 leprechaun Jack Sheehan leads the mock interview section of auditions, asking Conal Fagan good-naturedly about his clean-shaven face. The contestants were also grilled on such controversial topics as payment of student-athletes. 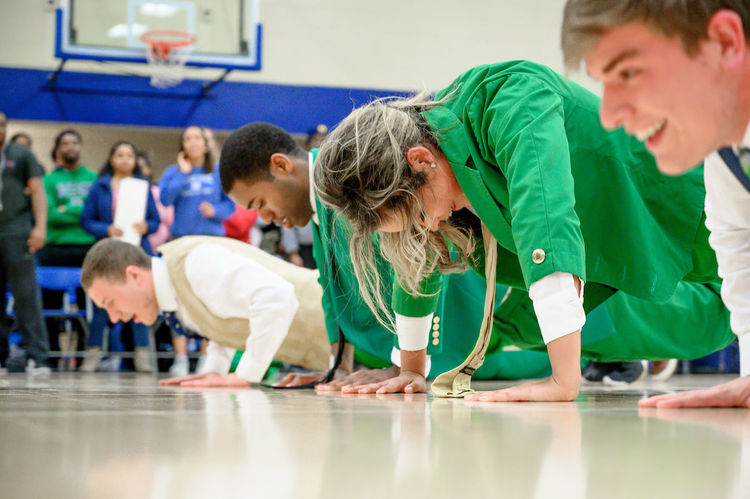 The event ended with a pushup contest. 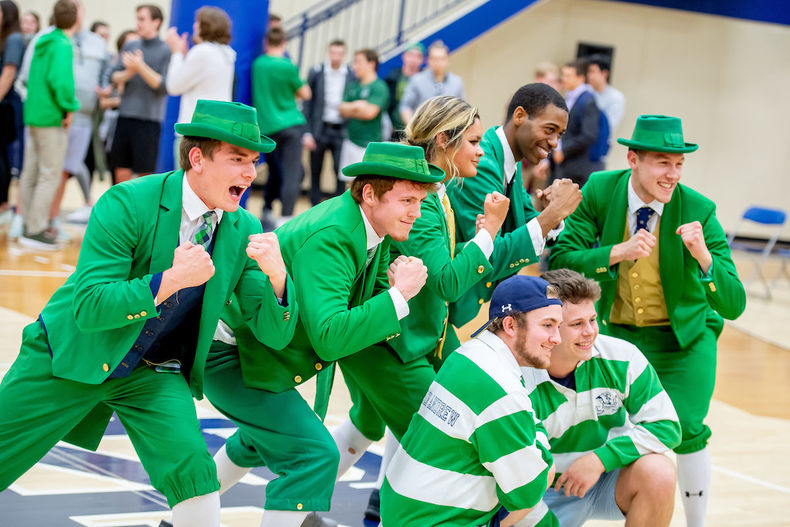 The Shillelagh, the traditional club carried by the leprechaun, is engraved with the initials of past holders of the role. Gold leprechaun Samuel Jackson posed with the club for his official team portrait.

Matt Cashore is one of Notre Dame's two University photographers and a regular contributor to this magazine.