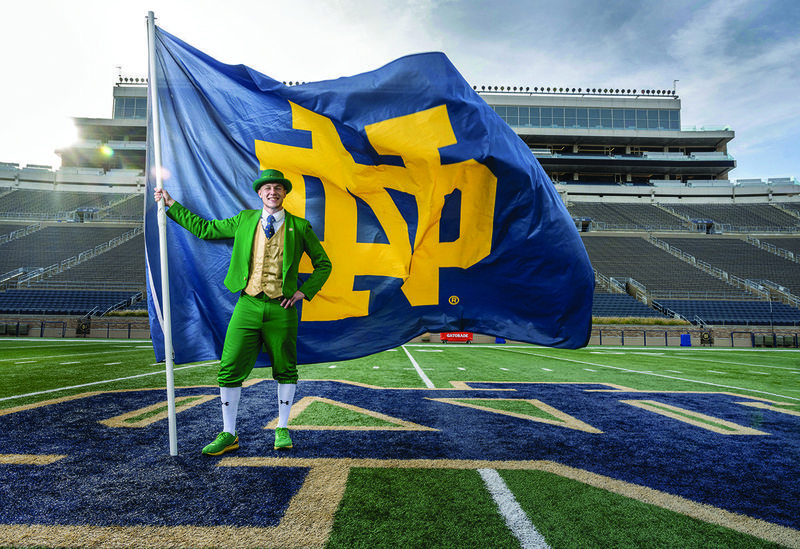 It started freshman year with the Christmas gift of a Fighting Irish jumpsuit.

It was a navy blue, zip-up, long-sleeve, grown-up’s “onesie,” emblazoned all over with “Notre Dame,” “Fighting Irish” and the interlocking ND logo in gold and white. It was, in short, not attire designed for an introvert.

Which meant it was perfect for Conal Fagan.

Fagan donned the bodysuit and wore it to cheer on the Fighting Irish during men’s basketball games. His outfit and enthusiasm drew attention — to himself and the fervor he fueled among fans.

“I would always start the cheers before the cheerleaders, and they got really annoyed at me,” he recalls with a laugh. At one game, Fagan and his roommate decided to go down and chat with the Leprechaun. That led to a coffee meetup, then an invitation to Fagan to attend a cheerleading practice.

Fagan as a freshman had “fun, crazy energy,” recalls Joe Fennessy ’18, the Leprechaun who invited him to the practice. “You need students who help stoke that flame. Conal stood out for that.”

Once Fagan saw how the cheerleading squad and the Leprechaun worked together to build crowd spirit, he was hooked. He tried out during the spring of his freshman year and was selected as one of the three students to serve as a Notre Dame Leprechaun for 2018-19. And he’s been chosen twice more since.

A native of Derry, Northern Ireland, Fagan is the first native Irishman to serve in the role since the Leprechaun became the official mascot in 1965. He’s thrown himself wholeheartedly into the role, earning the nickname “LepreConal.”

“It’s one of the things I definitely did not plan for at all. But I’m very blessed and very glad that I did it,” he says.

During his first two years in the green suit, Fagan led cheers at women’s basketball games and other sporting events, including volleyball, soccer, hockey and lacrosse. For fall 2020, he was the football Leprechaun.

As a teen, Fagan was part of a program called the Sutton Trust, which helps high-achieving students from across the United Kingdom explore and apply to colleges and universities in the United States. It was that program that got Fagan thinking about Notre Dame, which he hadn’t known about. “The more I started to look at Notre Dame and see what it was like, I just fell in love with the place,” he says.

Fagan played youth soccer at a high level, serving as a captain of Derry’s Oxford United Stars Football Club and representing Northern Ireland in international youth competition. For a time, he hoped to become a professional soccer player. Then his priorities changed, and he focused more intently on academics.

Fagan has faced more challenges during college than simply being far away from home. In November of Fagan’s freshman year, his father died after a seven-year struggle with Alzheimer’s disease. Patrick Fagan was 84 years old. “It was a very formative experience and I matured a lot quicker than a lot of other people. It was challenging for sure. A lot of different experiences that a lot of my peers won’t face for years,” he says.

After arriving at Notre Dame, Fagan played on the practice squad for the Irish varsity soccer team. “And then I just decided that wasn’t for me. I didn’t think that was the path I wanted to continue down,” he says. He started exploring other ways to get involved on campus, which led him to basketball games and the Leprechaun role.

He’s looking forward to commencement in the spring, and showing his mother, Kathleen, around on her first-ever trip to Notre Dame.

Because of the coronavirus, football season was different this year for everyone, including the Leprechaun. Masks were mandatory inside Notre Dame Stadium. And COVID-19 safety rules meant the cheerleading squad couldn’t be on the field or get within six feet of the reduced, socially distanced crowd composed mostly of students. The band and the cheerleaders couldn’t travel to away games.

Barred from the field, the cheerleaders at home games spread out along the concrete in the stands, and Fagan engaged with the crowd along the brick wall between the stands and the field. Beyond wearing the trademark green jacket, knickerbockers, tie and Irish country hat, the Leprechaun role includes dancing the Irish jig, interacting with fans and doing pushups to celebrate Fighting Irish touchdowns.

“The closest I can get is on the wall. So it’s trying not to fall off the wall the whole time,” he says. “It’s different, but it doesn’t change the essence of what the Leprechaun is, you know? That’s like being the spirit of the school.” The required face masks muffle things a bit, but that just means you cheer louder, he says.

It’s in trying times, now more than ever, that people need that Notre Dame spirit, Fagan says. “It’s a challenging time, but we have the opportunity to bring joy to people. Even in the midst of difficulty and the struggle, we’re able to do that.”