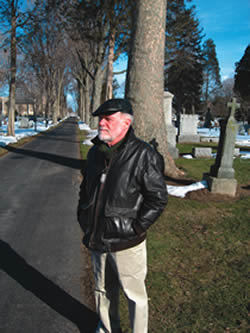 Ralph McInerny, whose body we buried there in February, liked to go for walks in Cedar Grove, too. He used to say of the cemetery a few hundred yards south of Notre Dame’s Main Building that when he walked there he felt as if he were attending a posthumous faculty meeting.

Although I was a mere 4-year-old when Ralph arrived at Notre Dame, I’m catching up with him. It won’t be long before I have as many colleagues and friends, Ralph himself among them, in Cedar Grove.

It’s a pleasant place to visit, and I do so more and more often. Despite its proximity to the busiest part of the campus, Cedar Grove is agreeably quiet, and its big solemn trees — most of which are oaks, maples and sycamores, belying the name — are fine to look at in any weather. The grounds are exhaustively gardened and manicured, and the older monuments feature unique and wonderful combinations of Victorian and immigrant Catholic styles. Because it is a well-trafficked cemetery, vigil lights, freshly placed flowers and other assorted mementi mori abound. In warmer weather, you sometimes see people picnicking among the graves.

From time to time, I picnic there, too, taking a carry-out sandwich and some coffee to an old friend’s graveside. For those of us who adore the incarnate God, keeping company with the dead is another way to revere life. To say so may seem cavalier, but death is no less fearful a thing for us than for others. “It’s always other people who die,” said Marcel Duchamp. We know better.

At the grave of my friend, I remember being with him when he died six years ago, surrounding his deathbed with his family and other friends in the cold blue fluorescence of a Manhattan hospital room, all of us, whether we’d read them or not, learning exactly what W.H. Auden meant when he wrote the lines:

The stars are not wanted now: put out every one;
Pack up the moon and dismantle the sun;
Pour away the ocean and sweep up the wood;
For nothing now can ever come to any good.

I sit where his bones are buried now and toss a few leftover Fritos to a brown squirrel emboldened by my stillness. I’m saying a prayer as I sit by that marble slab, knowing that I’m not praying alone, knowing that my friend and I are both praying to a God who knows exactly what Auden’s despair and our own feels like. A God with flesh like ours, who once longed and feared and died as my friend did; as I will.

Some women who visited another grave one morning were startled by angels who asked “Why do you seek the living among the dead?” If similarly accosted just now, I think I’d push back a little. What do incorporeal angels know about real flesh, the flesh that God and I and my dead friend all share? I seek the living here because my God himself is a man who was once as dead as my friend is and as I will be. I’ll seek the living where I please, and just now it pleases me to seek them right here in Cedar Grove.

In the earliest days of the church, in the catacomb of Callixtus in Rome, an anonymous Christian carved a few words over and over again on and around the tomb of a woman he loved. At times when I walk in Cedar Grove, that grieving Roman’s graffiti seems far less ancient. His wound, his longing, his hope and his faith become as palpable as the lump rising in my throat:

My friends, and I, too, live and will live. Forever. The day is coming when these graves will be empty.