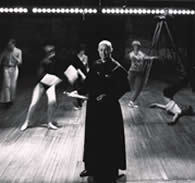 Father Arthur S. Harvey, CSC, was a presence. I first became aware of that presence as a freshman more than half a century ago at a rehearsal in Washington Hall. I noticed a black-clad man observing our work from the shadows of the back row of the theater and asked a friend, “Who is that?” He replied, “That’s the man who is going to take over the theater next year.”

His formative years had been spent in his hometown of Washington, D.C. At age 31, after working several years in private industry as an accountant, Harvey entered Notre Dame to study for the priesthood in the Congregation of Holy Cross. He graduated in 1947, returned to Washington to study theology and was ordained in 1951 at the Shrine of the Immaculate Conception.

Harvey brought to his priesthood a lifelong passion for theater. To aid in combining that love with his vocation, he entered the graduate drama program at the Catholic University of America and completed his studies in 1953.

He returned to Notre Dame to join the faculty with a newfound zeal and mission for bringing some of the excitement and academic credibility he had found at Catholic University to his work here. He had a dream. It was at that point when I first encountered his presence in the environs of the old campus theater.

Our sense of Harvey’s presence grew in subsequent years as he took charge of the program: renovating a somewhat seedy Washington Hall; selecting serious, demanding and sometimes controversial plays for those times; and exhorting us to find the best that was in us in service of what he called “the work we are doing here.” That phrase became a kind of mantra reflecting his unflagging enthusiasm for his dream. His youthful audience found it both challenging and sometimes humorous in its repetition.

He meant, of course, that he was trying to engage us in his mission. Through the years he ardently continued the work: in guiding and counseling students to realize their own dreams; in his carefully conceived and tightly woven theater productions; in the building of a faithful audience; and, finally, in establishing the basis for a professionally oriented academic curriculum within the liberal arts traditions of the university.

By the time of his retirement from the work, I’m certain he did not feel he had fully achieved his dream. But the presence remained. In his priestly office he presided at weddings of former students and baptisms of their offspring. He would often appear at opening night in the green room for a prayer and encouraging word. And he maintained a critical eye on the theater program. Often during those years, he would again sit in the last row of the theater observing the work, meeting and encouraging the new crop of students, and occasionally providing well-intended but sometimes trenchant notes to the director.

In later years when physical limitations prevented him from attending rehearsals or performances, he kept a watchful eye on campus from his second-floor room in Holy Cross House looking out on the Dome. Notes and prayerful wishes for the cast replaced his opening-night visits. Friends, former students and colleagues visited him for remembrance and celebration. Unable to leave his room, he once proudly officiated at a renewal of marriage vows for a former student. As always, he regaled visitors with memories: his past shows; his vast history of theater-going; his encounters with numerous theater artists, including his card games with acting legend Helen Hayes. Throughout, he always seemed to know what was going on and was full of comments on the latest happenings.

In 2000, the Notre Dame Alumni Association created a performing arts award in his honor. He was the first recipient.

Father Harvey died at age 96 on February 4. Like many of the legendary figures who have graced this campus, his presence will endure, embedded in the culture and life of this place and “the work we are doing here.”

Reginald F. Bain is an emeritus associate professor in the Department of Film, Television and Theatre.