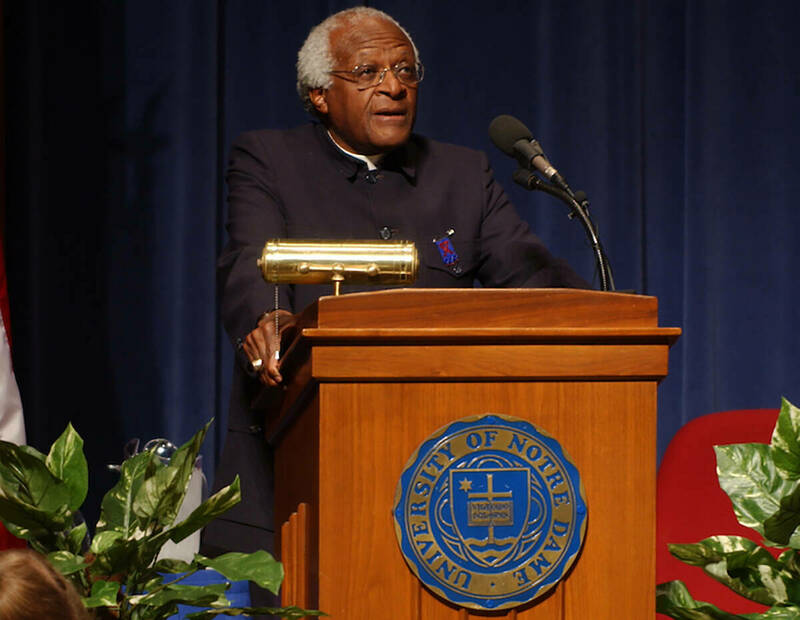 Editor’s Note: Archbishop Desmond Tutu’s death last month at age 90 brought to mind the Nobel laureate’s visit to Notre Dame in 2003, when the anti-apartheid activist offered a lighthearted address on peace-building that inspired optimism for the future.

Desmond Tutu is convinced that God has a great sense of humor. He said so in his talk last September in McKenna Hall, the Center for Continuing Education. But the Nobel Peace Prize winner from South Africa is pretty funny himself. Consider this bit of national self-deprecation:

“Have you heard about the spaceship South Africa plans to launch to land on the sun? People said, ’You’ll burn up long before it gets close.’ You think we are stupid? We’re going to launch it at night.’”

Tutu was at Notre Dame to give the keynote address at an international conference on peace-building sponsored by the Joan B. Kroc Institute for International Peace Studies. I can only speak for myself, but I suspect that everyone packed into the U.N. General Assembly-style McKenna Hall auditorium that night—and the overflow watching a closed-circuit feed in two other rooms—came away feeling as I did. More optimistic about the future of the human race than I had been in months. Like it must have felt to be around Gandhi.

I’ve found over the years that the smartest, most accomplished people often appear relaxed, even playful when talking to large groups of strangers. So it was with this gentle dark man in the clerical collar with the ready grin and bright eyes.

Early on the Anglican archbishop said it warmed the cockles of his heart (“I don’t know what cockles are, but they were warmed”) thinking of the college students whose protests in the 1980s convinced institutions to divest themselves of investment in companies that did business with South Africa during the apartheid era.

“We are free today because of you,” he said.

I had to wonder if he realized that his audience was largely made up of current students. They were probably watching Teenage Mutant Ninja Turtles about the time Nelson Mandela was released in 1990 after 26 years in prison.

In any case, he asked the audience to give itself a round of applause. And it did, in polite fashion. Which was not to his satisfaction.

He said we were very nice people but that he had a magic wand here that would transform us from shy, reserved Americans into boisterous fellow South Africans. A wave of the invisible wand, and, presto, the applause resumed in more raucous fashion with cheering.

“Thank you. I wave it again and you return to normal.”

He then confided that one time during a talk, he made a similar request, asking, “How about giving God a standing ovation?” and afterward, without thinking, he said, “Thank you.”

That great sense of humor Tutu believes God to possess might be more accurately termed a sense of irony. He said there was no other explanation for why God would choose to make South Africa the model for peaceful conflict resolution when the country was so lacking in virtue for so much of its history. As he noted, many predicted that with the end of apartheid in 1991 a bloodbath would ensue as the oppressed black majority took its revenge on the ruling whites. “They had every reason to want to pay back in the same coin.” Instead, black South Africans realized “that their own humanity was tied up in the humanity of the other,” he said.

At the beginning of his talk, I wondered briefly if this white-haired 71-year-old was going to last very long at the microphone. Long pauses stretched between his words, as if he were struggling to put his thoughts in order. But as he described the process of peaceful reconciliation post-apartheid, the smile widened, his eyes gleamed, and the audience hung on his every hopeful word.

He told us restorative justice was “more about healing than about punishment.” And, “Even the worst perpetrator remains a child of God with the capacity to change.” And, “True peace and security will never come from the barrel of a gun, no matter how high the fire power.”

“Lord, our hearts are restless until they find their rest in thee,” he later prayed, quoting Saint Augustine. "We are fundamentally good; the aberration is the bad. Not just some [are good]—all . . . all . . . Arabs, Jews, gays, lesbians . . . " At this point he appeared to be on the verge of tears. “All . . . all . . . all are meant to be held in this incredible embrace of the one who will never let us go.”

Nowhere can they ever say a problem is intractable, Desmond Tutu said, because God says, “Look what happened in South Africa. Their nightmare ended. Your nightmare will end too.”