Here is a little-known truth about Notre Dame Magazine: Carol Schaal ’91M.A., the managing editor, would be named the magazine’s Most Valuable Player if the award were put to a vote of the staff. Probably by unanimous decision.

Even though her byline rarely appears on these pages, her scalpel, skills and prudence as an editor are manifest in every line you read. Except for class columns (which pass through other capable hands), every word of every story is subject to her scrutiny. It’s not just grammar and syntax she’s inspecting — restrictive versus non-restrictive clauses, and when to hyphenate, abbreviate, capitalize, to comma or not to comma. It’s more than taking ax, clippers or scissors to prose, sculpting gardens from unruly or torpid tangles of feckless verbiage. 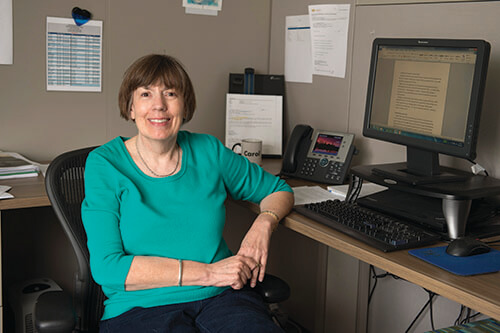 Carol lives with most of the stories she edits, and she edits all of them, which I have already stated, a redundancy she is sure to remove because if there is one thing I have learned by subjecting my words to Carol’s dissections, it is to be precise and not repeat myself or lapse into overkill or excessive literary behaviors. Because she will make me cut that out, or simply cut it out herself. We all defer to her judgment in wordsmithing.

Here is something else great about Carol: The writers who work with us are both amateurs (people who have never published before but have a compelling story to tell) and very accomplished professionals (who take their word choices and style and creations very seriously). And they all like working with Carol. They say their stories get better. They acknowledge the thousand words missing from the original, but they always say the story got better, and they hardly recall what words got erased.

Of course (Carol tells me I use “of course” and other extraneous literary affectations too often), writers will have their quibbles, and Carol handles that with a firm aplomb. I think aplomb can be firm. Carol will let me know. She might just take it out. That’s fine. I don’t think I’ve ever written aplomb before. I do know I’ve never tried to say it.

Here’s something else I love about Carol, and greatly appreciate. She is a perfectionist; she is meticulous and thorough and dogged in her surveillance, scrupulously flossing the details (perhaps not the best analogy to use here). The point is that when the magazine goes to the printer, I am confidently sure of it — because of her eye, and the care and pride she brings to each issue, every word, period and em dash. Errors do occasionally make it into print, but they are exceedingly though upsettingly rare. (Wait, the rarity isn’t upsetting; the occurrence is upsetting. Carol will clean this up. I will just keep going.)

But here’s what I was saying before, how she lives with the stories she edits (which now she would tell me to keep related thoughts together, to not diverge from logical sequence, to not wander discursively — and actually she would point out there is no other way to wander, so cut discursively, although it is a pretty cool word). “Live with” means she reads and researches, not just fact-checking but making sure writers are true and honest with their subject. She researches the subject matter as a requirement of conscientious editing.

And she edits to the writer’s own voice, doesn’t think stories should all sound alike. So the magazine, while consistent in quality, provides a range of voices, unique to themselves (itself?) and their (its?) individual storytelling.

And here’s something else. Carol has been with the magazine, like 25 years, maybe 30. And way back then, despite her roots in print, she embraced the new technologies, wrangled our website for years and learned what others here didn’t know. I do know that when I became editor in 1995, having been managing editor before that, I asked Carol, who had been an associate editor, to be the managing editor and to please be the magazine’s copy editor and traffic cop, content manager, efficiency maintainer. It was probably the best decision I ever made here.

Carol has been partner, guide, counselor, adviser, sounding board, confidant and friend for all these many years. She has been a perfect complement as we’ve discussed stories and edits, institutional politics and editorial philosophies. She has also been an inspiration. Diagnosed with multiple sclerosis 25 years ago (and beset with some other curveballs life has thrown her way), she has exemplified nothing but courage, grace, goodness and a mollifying sense of humor. And probably aplomb.

I’m revealing this long-held secret now because Carol is retiring this fall. And our readers should know how central she has been to all we do here, fundamental, essential. I could go on. But Carol would delete what verges on corny, sappy or sentimental. She would excise what she detects as hyperbole, melodramatic excess or embarrassing — to me, and to her. But damn, I will miss her.