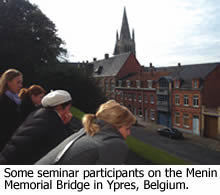 No place but Notre Dame. Those commercials during football games are true—once you’ve been here, you never forget it. A Notre Dame education informs the way you respond to the world and the way the world responds to you. It is an education that has taught me that my faith is more than just a part of my identity, it is my identity.

This real-life application of my education was put to the test over fall break when I traveled to Europe with 16 other students and our professor, Luc Reydams, for a political science seminar: Non-proliferation of Weapons of Mass Destruction. We visited multiple organizations that are key actors in the international nonproliferation movement; among them the Stockholm International Peace Research Institute (SIPRI) in Sweden, the Organization for the Prohibition of Chemical Weapons in The Hague, and the International Atomic Energy Agency and Comprehensive Nuclear Test Ban Treaty Organization in Vienna.

At each organization, we met with experts in the field who reiterated again and again the importance of nonproliferation in establishing a peaceful world order. Based on months of classroom research, we challenged these experts to articulate how nonproliferation strategies might achieve greater success in light of the shortcomings of the modern nuclear system. These meetings gave my classmates and me the unique opportunity to examine the question of nuclear proliferation from a 360-degree perspective. Regardless of the differing content and viewpoints presented in these meetings, however, I found myself constantly returning to the challenge of the Catholic perspective to an international issue that is one of the most significant facing my generation.

I can only assume that we were not unlike most college students in questioning the often ambiguous role of the United States with respect to peace and nonproliferation. I also found myself asking the question that has been brought up in every theology class I’ve had at Notre Dame since freshman year: What does this mean to me as an American Catholic? With the bridge Notre Dame has built between these two sometimes contradictory aspects of my identity, how does my Catholic faith impact my participation in American politics?

The questions sparked by this trip led me to do some research upon my return, and I discovered that the U.S. Conference of Catholic Bishops first addressed the issue of nuclear weapons in its 1983 pastoral letter “The Challenge of Peace: God’s Promise and Our Response,” and in the 1993 follow-up letter “The Harvest of Justice Is Sown in Peace.” What I found most challenging as an American Catholic was the charge issued by the bishops in their second letter:

“Peacemaking is both a personal and a social and political challenge: How do we live lives of love, truth, justice and freedom, and how do we advance these values through structures that shape our world? International peace is not achieved simply by proclaiming peaceful ideals; it also requires building the structures of peace.”

In our meetings at SIPRI and the U.N. agencies, my classmates and I were some of the privileged few who got to see some of these “structures of peace” at work; to see how they were putting into action, in a secular context, the bishops’ call to “responsible international engagement.” In their willingness to take time out of their busy schedules to meet with a group of U.S. college students, these high-profile leaders are examples of that responsible engagement. A person does not have to be Catholic to model, as these leaders did, how the Gospel values of social justice and peace are debated and promoted in the international arena. This trip allowed me to see the dire necessity of fundamentally transforming the nuclear landscape and re-orienting it toward peace.

As a Notre Dame student, policy informed by values is the gift I carry with me from campus to the world beyond. Going on this trip and meeting these visionaries of peace gave me the opportunity to confront the challenge of my Catholic faith in the context of serious international issues. Notre Dame, I now know, doesn’t just educate students. It commissions them.

Danielle Palkert is a junior at Notre Dame from Eden Prairie, Minnesota.