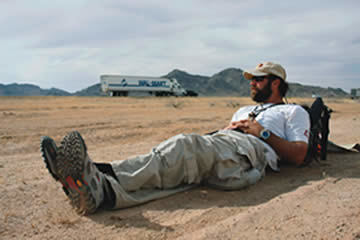 One evening in October 2008, Rory Fanning ’01 was sitting on top of an Appalachian mountain in Georgia eating a container of ramen noodles he’d just cooked over a fire.

A black bear padded up.

“He wasn’t more than 15 feet away,” says Fanning, 32. “We were both sort of stunned. He ran down the mountain when I went to get my camera, sort of unimpressed by my fare.”

Another person might have figured it was time to walk down to civilization.

Fanning, however, had recently left full-time work as a mortgage broker in Chicago partially for moments like this. “I didn’t want to wake up at age 65 with no memories save the weekends,” he says.

In May 2009, Fanning completed a walk from the Atlantic Ocean to the Pacific. His preparation took only three weeks, though the roots of the walk were much deeper.

When the United States decided to invade Afghanistan after the 9/11 attacks, Fanning joined the military. Although he considered himself a pacifist, he says, “If you’re part of a society, you’re culpable for the decisions of leadership regardless of what they are.”

During training at Georgia’s Fort Benning with the U.S. Army Rangers, he met Patrick Tillman. Tillman had made national headlines in May 2002 when he turned down a $3.6 million contract from the Arizona Cardinals football team and instead joined the military. In April 2004, Tillman was accidentally killed by fire from U.S. troops while in Afghanistan.

Fanning completed his tour, returned to Chicago and found work as a mortgage broker. By summer of 2008, he was ready for a change. “I was getting frustrated with the greed and selfishness and direction of the leadership of the country at the time,” he says. “You can’t be a real advocate against greed if you’re not a living example.”

With only one rule — no rides forward — Fanning started walking west from Norfolk, Virginia, on September 17, 2008.

Resembling a modern-day patriarch, he carried a wooden staff and a 49-pound backpack with a sign on the back that read “Rory Fanning, who served with Pat Tillman in the 2nd Army Ranger Battalion, is walking from the Atlantic to the Pacific to raise money and awareness for the Pat Tillman Foundation. Visit walkforpat.org for more info.”

During the first month, Fanning says, “I just tried to avoid attention.” But after he was asked to speak at a high school near Huntsville, Alabama, Fanning decided he enjoyed it. He then spoke to high schools, colleges, prisons, NFL alumni associations and corporations. He also received media attention, taking part in 75 interviews, including Fox News and Good Morning America.

Fanning says he never knew where he would sleep each night. About a quarter of the time he slept in Hampton Inns or people offered him a bed. Mostly he slept outside, sometimes in people’s backyards. That didn’t always work well.

“One guy in Texas caught me sleeping on his property once,” Fanning says. That guy had a shotgun. “He was really uninterested in any reason I might be on his property. Another guy in Alabama pulled out a gun, but he ended up giving me food.”

During the day, he’d do about 45 minutes of brokering by cell phone and would sometimes listen to audio books on his BlackBerry. He’d update his blog in the evenings.

For the most part, he observed. “Every 20 miles there was something new, a different landscape, a different plant,” Fanning says. “When you . . . let your imagination generate steam, you see details you don’t normally see.”

In Arkansas, he accepted a ride from a man who took him to a resort community, where Fanning took a shower while the man went door-to-door, collecting $1,700 for the Tillman Foundation. The man happened to be the Arkansas state tourism director, and he took the bearded, casually dressed Fanning to meet Governor Mike Beebe. Today an Arkansas Traveler’s Certificate given to him by the governor hangs over Fanning’s desk at his Chicago home.

He continued to walk. 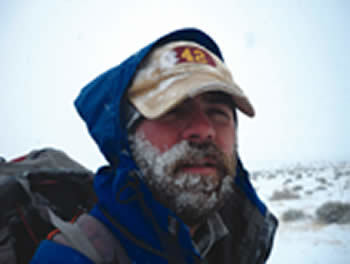 He walked through a blizzard in the Rocky Mountains and 110-degree temperatures in Arizona. In Charlotte, North Carolina, he walked 80 miles though a histamine disorder that caused his hands and feet to swell. “It was pretty miserable; it was walking on rolling pins.”

Walking near the Mexican border in California, he was pulled over 15 times by border patrol agents. “I would see teenage boys in the middle of nowhere staring at me, who had just run across the border,” Fanning says.

On May 15, 2009, Fanning arrived at the Pacific Ocean in San Diego. He had taken about three million steps, wore out five pairs of shoes and lost 30 pounds in the course of walking 3,100 miles across 13 states.

“I just learned to be present,” Fanning says. “I learned that the people in this country have a good side to them. When you can follow a personal passion . . . you enthusiastically bring joy to your own life and the lives of others.”

Mark Lawton is a general assignment report for a chain of community newspapers outside Chicago.