In 2008, a Nigerian company intentionally put diethylene glycol, an ingredient in brake fluid, in its teething syrup; 84 babies died. In many countries, it’s not rare for patients to be given tainted medicine — and in most cases there are no outward signs that these drugs might be lethal. 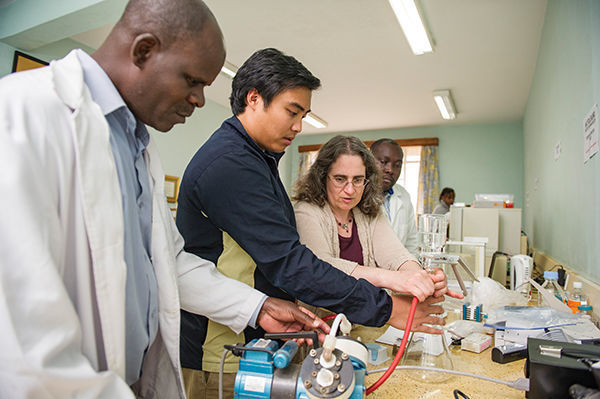 In Africa more than 120,000 people die annually because of both fake and substandard anti-malarial drugs. In Pakistan four years ago, a contaminated heart medicine killed more than 200 people. In the United States, Prince’s death in April apparently was caused by counterfeit drugs that were labeled as hydrocodone but contained a lethal dose of fentanyl, an opioid painkiller that is about 100 times as strong as morphine.

Marya Lieberman, a Notre Dame chemistry professor, says substandard drugs generally are the result of manufacturer error. “It could be that they are sloppy or that they don’t know how to do the quality control properly,” she says. Or medicines can be purposefully substandard and sold to countries lacking the resources to notice. In nations with many small manufacturers of medicines and no single distributor, knowing which companies are likely to sell substandard medicine is invaluable to pharmacies.

Now they have some help. Lieberman’s Paper Analytical Device project (PAD) began six years ago as a creative collaboration between Notre Dame and Saint Mary’s College and has since evolved into an international effort to increase pharmacists’ awareness of the actual drugs they are receiving.

In 2010, Toni Barstis, program director for the dual-degree engineering partnership between Saint Mary’s and Notre Dame, wanted to come back from sabbatical with something new to show her students. She worked with Lieberman to develop a paper lithography project; its goal was to demonstrate how computer chips are made, although real ones require more extensive technology than chemicals arranged on paper. Lithography is similar to developing photographs, involving soaking paper in photoresist and requiring a light room.

After the initial development, Lieberman began making paper cards with the cheaper and more efficient wax printing method. Eventually, Lieberman and Barstis began to investigate other uses for lithography — and, amazingly, that search led them to a problem in Haiti.

Lieberman had been advising Father Tom Streit, CSC, as he worked on fortifying salt to help combat the spread of lymphatic filariasis. She grimaces as she recalls medications Streit once brought back from a Haitian market. “You could just smell that they were bad . . . viscerally it’s really objectionable to think that that’s the medicine that is available to them.”

An idea was born. Lieberman and Barstis began to focus on using lithography to identify substandard medicine.

Since 2010, they’ve developed paper analytical devices, or PADs, for the identification of 60 different falsified pharmaceuticals and have produced more than 15,000 of the screening cards. PADs are about the size of playing cards, with 12 lanes made of printed wax lines. Each lane has specific reagents that detect the ingredients in the tested drug. The user mashes up the pill, spreads it on the card and adds water. By comparing the colors produced on test cards to prototypes, users can learn whether the pill contains the correct active ingredient.

A separate effort by New York City startup Veripad is increasing the accessibility of the PAD. Founders Bishoy Ghobryal, Da Wi Shin, Y-Lan Nguyen and Jason Ki, who had talked with Lieberman while they were students at City College of New York, are marketing an app for use with the paper device. For the app, users take a picture of the test card with their smartphone, matching the picture with those in its database to determine if the drug contains what its label says. Additionally, users with any phone that has image-sending capabilities will be able to send a picture of the card to a website and receive a text of results back in about 10 minutes.

“I’ve been doing whatever I can to help these students,” says Lieberman, who sees the app as increasing the ease of using the PAD, thereby helping to make its use more widespread. In another move that may further that goal, the Veripad founders investigated manufacturing the PAD overseas; they hope to have the product on the market in Kenya this year.

Even though the PAD is a major step in ferreting out fake drugs, the screening card can show only which chemicals the drug contains. It does not show the amounts of those chemicals — an analysis needed to identify drugs that contain inadequate amounts of the active ingredients.

To deal with this major problem of medications that might be at less than the needed strength, Lieberman’s lab works with a network of 18 U.S. universities using High Performance Liquid Chromatography (HPLC) machines to obtain quantitative chemical analyses of drugs collected from partner pharmacies in Kenya and other developing nations.

Unlike the PADs, the huge HPLC machines are expensive and require extensive training. While the PADs continue to reach a wider population, Lieberman will advance her efforts to increase the analytical testing of medicines in Kenya and elsewhere. She has been working with a pharmacy in Kenya for five years and visited last January to help set up its HPLC machines.

Notre Dame seniors Tabitha Healy and Paulina Eberts assisted Lieberman at the Kenyan lab. They described the challenges of the work there, which included opening windows to air out chemicals instead of using fume hoods and making tweezers out of bobby pins. “You have to have that mindset there, especially if you’re going to overcome a lot of barriers,” Eberts says.

The people responsible for the tainted teething syrup in Nigeria were sentenced to seven years in prison in 2013. But there is no international law or system that criminalizes falsified pharmaceuticals. “I want to approach this from a sciency perspective, but that’s not the only perspective; it’s not even necessarily the most important perspective,” Lieberman says. While it’s outside her expertise, she would be glad to have a policy-focused undergraduate conduct surveys on current laws and increase understanding of the policy implications of her work.

Last spring, Lieberman, Barstis and Patrick Flynn, a Notre Dame engineering professor, were issued a patent for the PAD. Now the University is negotiating licensing with companies, and Lieberman has continued to step outside of her lab to sit in on the negotiations. These discussions have been different than many patenting efforts because Notre Dame is not solely seeking the company that will get them the most money. Lieberman explains, “For this patent the University’s goal is to ensure that the technology is used for humanitarian applications.”