Only three months after returning to Nantucket from the horrific disaster of having his ship sunk by a whale, surviving three months adrift and having to cannibalize his cousin to survive, Captain George Pollard Jr. went back to sea. 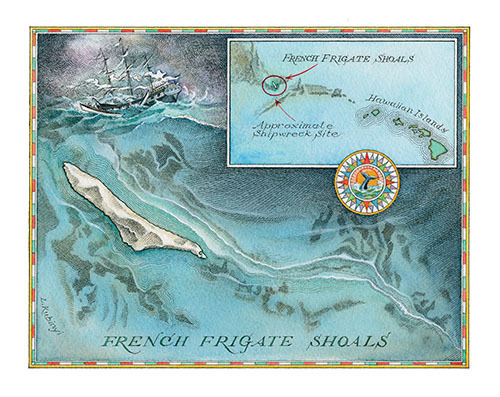 In November of 1821, Pollard set sail from Nantucket as captain of the Two Brothers, ironically the same ship that had returned him and the other Essex survivors to Nantucket. The ship’s owners had been impressed with the 29-year-old captain and offered him command of the whaler’s next voyage, back again to the whaling grounds near Midway Island.

It seemed a good choice. Described as a quiet, contemplative man, the young captain was well-liked and respected by his Two Brothers crew despite the earlier tragedy. In fact, several members of his Essex crew signed on with him again.

The ship rounded Cape Horn in the winter of 1822 and slowly made its way up the South American coast. Along the way it encountered the Water Witch, commanded by a Captain Charles Wilks, who recognized Pollard as the former captain of the infamous Essex. Wilks asked Pollard how he could possibly return to sea after all he had endured. The captain is said to have replied, “Lightning never strikes in the same place twice” — a comment he would one day regret.

Off the coast of Peru, the Two Brothers encountered yet another whaler, the Martha, and the two ships teamed up. Their tandem journey was uneventful until the night of February 11, 1823. Sailing 600 miles northwest of Honolulu in largely uncharted waters, the whalers were hit with a furious storm. During the raging nighttime gale the two ships became separated. The Martha managed to find shelter on the leeward side of a 120-foot-high volcanic rock, LaPerouse Pinnacle. The Two Brothers, however, was much less fortunate. It ran aground on the reef at French Frigate Shoals in 15 feet of water.

As the rain and waves lashed the ship, timbers began snapping and the Two Brothers started breaking apart. Afterward, members of the crew said Captain Pollard appeared dazed, frozen in his tracks. He couldn’t believe he was losing his second ship and seemed intent on going down with it. The crew pleaded with the captain to abandon ship with them, finally persuading him.

As the storm raged through the night, the seamen clung for their life to the ship’s small whaling boats. By daybreak the ocean had calmed, and the sailors rowed to the Martha, which rescued the captain and his entire 20-man crew.

When they looked back to the reef they saw no sign of the Two Brothers. It had broken up, vanished, hidden under the sea until August 23, 2008.