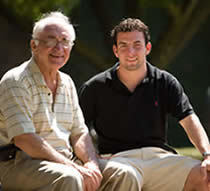 Jack and John Conroy aren’t brothers or even cousins, but they spent the last two years at Notre Dame as fellow students. They met at least once a week for lunches at The Huddle or dinners at Jack’s home. Sometimes Jack dropped by when John was performing locally as a songwriting singer and guitarist.

Jack ‘59, wrapping up his doctorate dissertation in theology later this year, is undergraduate John’s grandfather.

They’ve asked around and no one—not the admissions office, not even Father Hesburgh—can remember a grandfather and grandson enrolled at the University at the same time.

The grandfather-grandson team talk about how grateful they are to have had the chance to be peers. But if the Christian Brothers who ran New York’s Iona College in 1962 hadn’t forbidden Jack from including Marx and Engels’ revolutionary tract in the syllabus of his political philosophy class, it may never have happened.

Who knows? The elder Conroy might have earned his Ph.D. in the 1960s and gone on to a distinguished career in philosophy. He might have returned to teach at Notre Dame, where he’d earned a bachelor’s degree in business administration packed heavily with the math, philosophy and literature courses his thoughtful dean, James W. Culliton, allowed him to take during his junior and senior years.

Instead, Conroy say, he was fed up with the lingering political air of the McCarthy era and the additional restrictions on academic freedom then levied by some Catholic institutions that bowed to the Index of Prohibited Books, so he “self-righteously stomped out.” He left Iona and his academic career for a lifetime’s exploration of entrepreneurial capitalism. He and his wife, Joan, moved to Jack’s hometown, Chicago. Jack picked up with his uncle’s construction company, where he’d labored each summer from eighth grade through graduate school, first in odd jobs, then as a carpenter and eventually as a project planner and scheduler.

The teaching bug and the craving for deeper meaning never left him. Work moved the family to Naples, Florida, and Conroy eventually founded his own prominent real estate development company, but he still found time to teach philosophy courses at Edison Community College and Barry University.

By the late 1980s, with his three children now through Notre Dame, Jack’s scholarly pursuits were shifting toward first-century Christianity. But it was Joan and daughters Mary Zoe ’86 and Kristin ’88 and a one-week, just-for-fun summer course on British poetry the three took at Notre Dame in 1991 that re-connected Jack to campus.

Jack and Joan began spending their summer vacations at Notre Dame the following year. Over time, Jack took courses for credit in Greek and theology. Joan audited courses, often alongside her husband.

Meanwhile, John, wading into elementary school, was beginning to dream in blue and gold.

In 2002, at a time in life when his colleagues’ thoughts were turning increasingly toward the golf course, Jack acted on the encouragement of his friend, theology Professor Greg Sterling, to apply to the program in Christianity and Judaism in Antiquity.

“I decided to do an inventory of what I did with my time when I wasn’t working,” Jack recalls, “and I found that I was spending a lot of time working on the Gospels and all the texts of the Hellenistic world at the beginning of Christianity. I thought it might be a good thing for me to plan my retirement job as a scholar.”

At age 65 he went back to school full time. He didn’t drop real estate right away, because apparently Conroys aren’t content to do just one big thing at a time. So while surveying Greek and Christian thought from Heraclitus to Augustine, he developed three building projects in the Naples area.

Jack Conroy calls the five years at Notre Dame “Joan’s gift to me,” particularly since it meant missing out on time with their 12 grandchildren. But Joan continued to audit courses and became part of what the couple say was a surrogate family of professors and students. She chuckles when she tells the story of a girl who turned to her on the first day of class and invited her to join a study group.

Grandson John arrived on campus in the fall of 2005 and toyed with the idea of a music major but settled on accounting. Like his grandfather, though, he didn’t completely abandon one love for the other. He recorded an album of his songs—_My Home_—with Faith Hill’s band at a studio in Nashville. He’s in the process of pursuing a pair of construction-related patents with his father, J. Thomas III ’83, a Naples attorney and developer. Now in his junior year, John also is developing a novel business plan involving yachts.

Jack, now 70, plans to teach for the Diocese of Venice in Florida, at the Blessed Edmund Rice School of Pastoral Ministry “as long as my mind works.” John, on target to graduate in 2009, hopes to apply to J.D./MBA programs and defer for a year so he can see whether he has a music career in him.

“He’s just bright as hell,” says the grandfather of his grandson, eschewing theological sophistication for the sake of an honest appraisal.

The admiration is mutual. Lunch conversations at Notre Dame were a time for the aspiring entrepreneur to air business ideas to Jack and “soak everything up that he says.”

“On the spiritual side, he’s definitely a mentor,” John adds. “He knows so much on the spiritual aspect of it all that I can come to him with any question. The guy’s a walking encyclopedia.”

John often brought friends to his grandparents’ house for dinners that routinely ended with a dessert of grilled peaches and vanilla ice cream, a tradition they carried home to Naples this summer.

“We have become very good friends,” Jack says. “It continues to be a rich experience.”