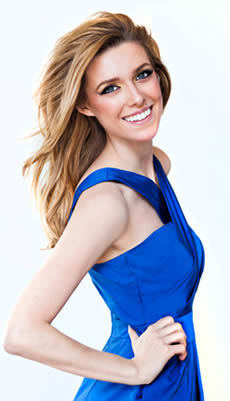 Fifteen seconds later she’s delivered a squeaky-clean quip about a priest and a million bucks, and I’m giggling politely. Vale laughs at her G-rated attempt, too, and admits, “I’m working on being funny.” It wasn’t Chelsea Handler’s job she was after but, rather, the title of Miss California USA, just a side dish to her full-time gig as an aspiring actress and model in Los Angeles.

Vale prepped for the pageant for six months, boning up on current events, lifting weights at Gold’s gym and, yes, perfecting her witty banter. Despite all her work, the title was not to be. Still, she appreciated the chance to follow in the footsteps of her mother, Sheila Mitchell, who won the title of Mrs. Minnesota America in 1990 and Mrs. Minnesota USA in 1993

Life hasn’t always been so glamorous for London (yep, it’s her real name), who grew up on a 500-acre apple farm, 35 minutes south of Minneapolis. She got her first shot at performing at age 5, giving tours of the orchard to visitors while standing on top of a wagon. It wasn’t long before the precocious kid was begging her mom to let her audition for a paper plate commercial that was shooting nearby.

“I hate chocolate, but I had to wear a white dress and grin while I ate scoop after scoop of chocolate ice cream off the plate,” she recalls. Vale faked the chocolate fixation long enough to nab the role, which led to a string of other jobs, including a small part as a schoolgirl in the 1995 Warner Brothers film A Little Princess, the cover of Catholic Digest and commercials for Target and McDonald’s while in high school. When it came time to consider colleges, Vale visited South Bend at the suggestion of a friend, took one look at the DeBartolo Performing Arts Center, and knew she’d be calling Notre Dame home in the fall.

The self-described “theater nerd” fell right in with the other artsy students on campus, creating short films with friends from the St. Edward’s Hall Players and taking on roles in four performances put on by the University. “There were times where I felt like the quirky girl. I think some of the students probably didn’t know what to do with me,” she remembers. Not that it ever deterred her — when it came time to graduate, she watched her peers accept their various job offers and purchased a one-way ticket to LA.

There, Vale threw herself into show-biz runaround. “I auditioned four, sometimes five times a day,” often changing clothes out of the back seat of her car, she says. Like most up-and-comers, Vale got more rejections than callbacks. “Sometimes you just have no idea what they’re looking for. There’s no feedback. It’s just, ‘You didn’t get it, sorry,’” she says. But instead of giving up, she started working on small independent films, sometimes for free, on set nine days straight with little sleep between takes.

“Every once in a while I’d get lucky and meet someone on set who was willing to introduce me to their agent or tell a casting director about me,” she says. “Like any other industry, it was all about building contacts.”

The networking paid off. Vale landed some modeling gigs, slipping into everything from bikinis to wedding dresses for local magazine spreads, designer websites and even the runway. Nice work, for sure, but it is, well, work. “It’s never as glamorous as it looks,” admits Vale. “But I’m usually so happy to be there — pulling ideas and inspiration from the stylists and makeup artists — that I don’t have time to think, ‘My feet hurt!’ or ‘I’m cold!’”

All of the success was sweet retribution for the young woman who was told she had to make some changes if she wanted to be a model. “I remember when I was 21 a photographer told me I needed Botox. Someone else once told me I’d never make it if I didn’t have the tiny mole above my lip removed. I’ve learned to take it all with a grain of salt.” For that healthy attitude, she thanks Notre Dame. “I’m so grateful I have that foundation to lean on. I learned to keep my head screwed on straight.”

Vale’s refreshing attitude will come in handy now that she’s inching closer to her real passion: to become a dramatic film actress. She has a recurring role in The F List, a webseries about making it in Hollywood, and just finished filming the independently produced TV pilot The Gunrunner Billy Kane. Her work in the sci-fi thriller required more than just acting chops. Vale spent part of the movie being chased by a CIA agent across the rooftop of a building and scurrying down a three-story fire escape — all while wearing high-heeled boots.

Scary? Sure. But the up-for-anything actress hopes her next role will be equally as edgy and fun. “You put in tons and tons of work, and once in a while something really cool happens,” she says. One such moment: Vale recently got a call from her sister, who spotted her modeling a designer gown in an issue of Us Weekly. It’s a long way from orchard tours and paper plate commercials, but in a way, she’s just getting started.

Kristen Dold lives in New York City and is an associate editor at Women’s Health magazine.