If I accomplished nothing else — and a search confirms I didn’t — The Observer archives include at least one contribution that I haven’t tried to suppress from memory out of embarrassment. 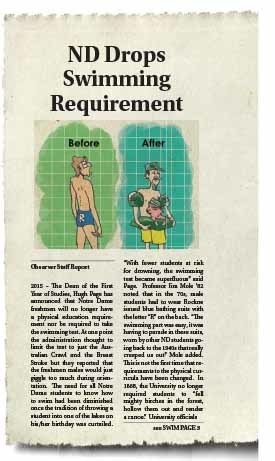 While I was working toward that ’95 affixed to my name, I wrote a lot of cringe-worthy stuff for the paper, sports mostly. This was so long ago that the football team had a legitimate beef about not winning a national championship (1993) and the residual stature to be invited to an undeserved bowl game (1994). Happier times.

I covered men’s basketball, too, which was then slogging through some not so happy times. Part of that job involved making predictions for the upcoming games. Above each of my wild guesses it said, “Jason Kelly’s Pick.”

Real newspapers did that, so The Observer adopted the practice, but it was impossible to ignore the absurdity of my fortune-telling, say, the Notre Dame-Duquesne game. Since ¯\(ツ)/¯ wasn’t a thing back then, I had to come up with something.

How and when it went beyond the sports page, I have no recollection, but someone came up with the inspired idea to embrace the nonsense and incorporate “Jason Kelly’s Pick” into the dining hall menus. I was even less qualified for that task than the basketball scores. At least I went to the games. I didn’t eat at the dining hall that much, mostly grabbing and going or subsisting on Huddle burgers to sustain the late nights and early mornings up in the old LaFortune office.

Working for The Observer consumed disproportionate time and attention, more than any class — and I have the transcripts to prove it. My job wasn’t even that important to the paper, just to me, and I was hardly alone. Obsessive commitment is among the most enduring traditions of the paper that recently marked the 50th anniversary of its first edition, published on November 3, 1966.

“Late nights in the office” commanded its own category in The Observer’s anniversary coverage. Marti Hogan, a Saint Mary’s alumna who became the paper’s first female editor-in-chief in 1977, recalled seeing the sunrise through the office windows and driving the paper to the printer after all-nighters. 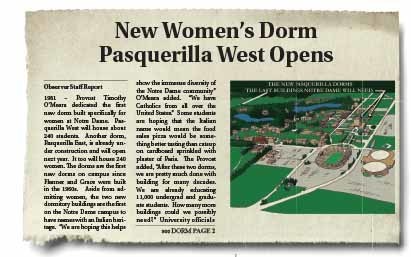 Another former editor-in-chief, Chris Hine ’09, now a Chicago Tribune sports reporter, spoke to journalism students this fall. He told them he came to Notre Dame planning to be a history professor, but after being drawn into the “vortex” of the student newspaper, he graduated with a de facto double major in The Observer.

I remember bleary dawns and hour-long daybreak rides to Milford, Indiana, to deliver the issues we couldn’t finish in time to drop off for the printer’s driver. I remember the vortex.

I remember a story or two, mostly with a wince, but I especially remember a prevailing sense of irreverence directed mostly at ourselves, an unspoken acknowledgement that we weren’t yet the professionals we pretended to be. Hence my dual role as sports prognosticator and appraiser of the relative merits of soy glazed chicken and cheeseburger pie (either a worthy accompaniment to the roundhouse potatoes).

Somewhere in that ridiculous little recurring feature, I felt like we hit a student newspaper sweet spot. We cared about the work, reveling in the adrenaline rush of big news and treating our truth-to-power responsibilities with respect. But we also inserted fake names in football rosters to make them fit and came up with spoofy house ads to spackle patches of white space. If you see sports happening, call 631- …

When I think back on it, the ersatz-earnest dining hall recommendations were among my best work, or at least my favorite. Even — especially — the ones I didn’t write.

I had a night off every now and then, and, as a newspaper of integrity, those editions of The Observer included the disclaimer that Jason Kelly’s pick did not necessarily reflect the views of Jason Kelly.

Michael Molinelli ’82 is an award-winning architect whose daily comic strip Molarity appeared in The Observer when he was a student. A new strip called Molarity Redux has appeared at magazine.nd.edu for the past six years. Molinelli’s book, Molarity: The Compleat Moliary, is a collection of his 581 original Observer cartoons.