I used to wonder how people learned they had been diagnosed with cancer. Was it the first thing the doctor said after closing the door? Could they tell from the doctor’s facial expression? Once told, how did the patient react: Stunned silence? Tears? Nausea? When I found out, I was sitting at my desk at work, talking on the telephone. My urologist had told me to call him at 1 p.m., three days after a biopsy was taken of my prostate. When he came on the line, he said simply, “I’m afraid they did find some cancer.” 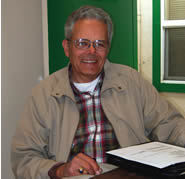 This was our second post-biopsy conversation about prostate cancer. The first had been nine months earlier when a biopsy had produced no evidence of cancer. But my PSA had continued its rapid climb, reaching 8.67, a number that brought a laboratory notation: “high risk of prostate cancer.” So I was not surprised by the diagnosis. Later that day I went to an office birthday party, where I felt newly separated from my co-workers. I had cancer. They didn’t.

There is relatively little cancer in my family, but I’ve always had an inordinate fear of the disease. When a co-worker or friend was diagnosed with cancer, I didn’t know how to respond. Call and express my concern? Send a card? Speak about cancer when I was with them? Avoid contact, presuming they would like me to respect their privacy? Not knowing what to say or do, I mostly said nothing.

It did not take me long to decide which kind of treatment I would have. I underwent a radical prostatectomy six weeks after the biopsy. My long-time internist had advised me that surgery was the gold standard for a man in otherwise good health who could be expected to live at least 10 years but for the cancer. The second day after the surgery, the urologist called my hospital room with the good news: The pathologist found no cancer in the lymph nodes and no evidence the cancer had spread outside the prostate. My wife, Carola, kissed me and said, “The cancer’s gone.” The whole truth about the pathologist’s report would be revealed more slowly.

The months that followed were a struggle with the side effects of a radical prostatectomy. I went back to work after four weeks. My PSA dropped below 1.0 and continued to fall toward 0.0, the goal of every man recovering from prostate cancer. Six months after the surgery I retired, as long planned, on my 65th birthday. I thought of myself as someone who had come through a storm, damaged but content at surviving.

The first indication that all was not fine came in another PSA test. My PSA had climbed over three months to 0.2. My urologist shrugged it off, saying that those low numbers were within the margin of error of the test and that I should not worry about it. I was skeptical.

By my next medical appointment, three months later, my urologist had left the practice and was replaced by the surgeon who had assisted at my prostatectomy. My PSA had risen to 0.3, and my new doctor told me what I had not been told before. A post-surgery pathology report had indicated a more virulent cancer than had been predicted by the biopsy. Although there was no evidence of cancer outside the prostate gland, the surgical margins between the cancer and healthy tissue were very close in two locations. “Only two things make PSA,” my new doctor said, “prostate tissue and prostate cancer. You don’t have any prostate tissue.”

The next months were a time of waiting to see which direction the PSA would turn and, if it continued up, how fast. During this period I descended into what I now call the “dark place of the soul.” Cancer was always on my mind. I might shake it off during a movie or a play, but it would be back as soon as the theater lights came up. I cracked jokes my wife found entirely unfunny. I tried prayer, but God seemed not to be listening.

One day my wife had enough. “I don’t know where you are,” Carola said, “but I do know that only you can pull yourself out of it. You can’t give up on life. You have to want to live.” I knew she was right. I would have to take charge. On my next visit, I told the urologist that I believed I was a good candidate for radiation and wanted to be referred to a radiation oncologist. After more tests and examinations, I walked a month later into a cancer treatment center for what would be seven weeks of Monday through Friday radiation treatments.

Radiation patients must partially disrobe to expose the area of treatment. Although they wear hospital gowns in the waiting room, you can tell the type of cancer they have by which articles of clothing are missing beneath their gowns. Men without pants are probably prostate cancer patients. Men without shirts are probably lung cancer patients. Women without blouses usually are there for breast cancer. As I entered the patient waiting room on the first day, I wondered how I would make it in a whole room full of people with cancer. Then the thought made me smile. So how exactly was I any different from them?

I was assigned to Treatment Room B. Entering it was like going into a bank vault with a door just as thick. I was there to receive “rads,” as the technicians called them. Each day the technicians would position me on a glass table beneath the linear accelerator. Above my face was a sheet of glass with a graph imposed upon it. What I could see of the graph was the letter “Y” and the number “2,” so I named the machine “Y-2.” On about my third day of treatment, one of the technicians said, “Let’s get some music in here. How about Bob Marley?” I would have preferred Aaron Copland, but reggae became the sound of my treatment. When the technicians left and the door clanked shut, my companions in Treatment Room B were Y-2, God and Bob Marley:

As it turned out, I did not find the patient waiting room depressing. For the first time since I had been diagnosed with cancer, I was with people who truly understood. They, too, had been to the dark place of the soul and were fighting their way out. Susan, the woman who followed me into Treatment Room B, was a breast cancer patient at age 49. She said that when she went for her biopsy she was in such shock that she did not even feel the needle. “I cried for weeks,” she said. When she learned the cancer had spread to the lymph nodes, she was inconsolable. One day she came into the waiting room wearing a green, knit hat and a sweatshirt bearing the likeness of a cat wearing a green, knit hat. Beneath the cat, it said, “Bad Hair Day.” “Me, too,” she said, pulling off the hat to show the stubble on the top of her head, all the while laughing with the rest of us. Healthy humor is a stepping stone on the path back from cancer.

Now I am no longer at loss for words with cancer patients and survivors. Once I sat for an hour with the spouse of my wife’s cousin, a breast-cancer survivor. She told me that she started to come out of the dark place when, some months after the completion of her treatment, she saw the sun shining through the leaves of a tree. “I was struck by the beauty of the tree, and it made me feel good,” she recalled. “I gave myself permission to have joy, again.”

The day came when I said goodbye to Y-2 and my friends in the waiting room. Three months later my PSA had dropped, not to 0.0 but back down to 0.2, where it held for two years. What I have learned is that all cancers are not an automatic death sentence. I have changed my lifestyle and diet, lost weight, exercise more regularly. I have learned that even if you are not cured of cancer, you can live with it and make the most of your life. And I recognize now that God does not provide instant gratification. Prayer requires patience. It is a conversation with a member of the family in which things are worked out over time. God and I have a continuing discussion about this.

Once on a flight to Southern California, I saw the ocean in a way never revealed to me before or since. On every other flight, I have seen only the surface of the water, blue or gray, glistening or dull. On this one occasion, the angle of the sunlight and the temperature of the water made it possible to look deep into the ocean. I could see mountains rising up from the ocean floor, dark canyons and forests of kelp climbing toward the sun. I glanced around the plane to see if anyone else was looking at this remarkable sight, but they were all reading or napping. It was like a gift bestowed upon me alone.

For me, the struggle with cancer has been like looking deep into the ocean. I see more clearly now what I have done and what I have failed to do. I used to say that someday I would work with the homeless and volunteer at legal aid. With my cancer, I realized that “someday” had arrived. On Wednesdays, I serve at a dining room for the homeless. On other days, I join a group of lawyers who try to help homeless people solve their many legal problems. I know there is more to do.

Our youngest daughter was visiting the day I was diagnosed. I told her that I had to tell her something and I needed her to keep her composure. When I saw her struggling with what to do next, I knew the answer to the questions that used to trouble me when friends were diagnosed with cancer. “I’m the same guy I was yesterday,” I told her. “Treat me just the same.”

You can lively up yourself and don’t be no drag

Hey, you lively up yourself, can you dig it?

Ronald Blubaugh retired after almost 28 years as an attorney and administrative law judge for the State of California. He volunteers at a center for the homeless in Sacramento. The first two song clips are from “Put It On,” by Bob Marley; the third is from his “Lively Up Yourself.”