After work one night in September I met up with a friend from Notre Dame, Meg, for drinks at a rooftop bar in New York City. We’d been talking about doing this for a while, getting to a rooftop bar before things got too busy and the summer passed right by. After consulting timeout.com and conversing via Facebook we chose The Press Lounge, located on the West Side and overlooking the Hudson River.

It was something to look forward to, something to break up the monotony of the week. And in a way, going to a nice bar like this after work on a weekday feels like a young-professional-in-New-York-City rite of passage.

We arrived around seven, ordered glasses of Pinot Grigio and took a prime spot facing the city to watch the sun set while we caught up on our new lives. We talked about how beautiful the city looked from this angle and how we hoped to never become one of those jaded New Yorkers who goes about life in such an irritated rush that the place loses its awe-inspiring quality.

Meg and I graduated from Notre Dame the same year and both grew up in New York City suburbs. We talked about college, of course, but it was strange how removed we felt from it after only three months as young alumni.

We realized there is a clear disjointedness to those two lives, college life in the Midwest and home life outside of New York City. 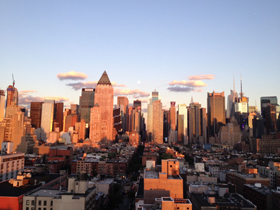 Those two lives don’t seamlessly meld into one another, but rather seem to be self-enclosed bubbles of months or years, sharing adjacent positions on the timelines of our recent pasts.

It’s odd too thinking that during those undergrad years, college was everything. Total immersion in papers, practices, clubs and parties meant I’d sometimes lose track of major news events, even family updates — as if all that mattered was Notre Dame.

Despite semesters in different countries, summers in various cities or breaks at home, as soon as we were back on campus and thrust into the regular workload, those other experiences faded.

Then, all through senior year, our impending graduation was this distant siren growing louder by the month, but never quite loud enough to demand serious acknowledgement. Even weeks before graduation, some of us were still in denial it would happen.

If we remained firmly grounded in this place, in everything Notre Dame, how could we suddenly end up on the other side?

Of course, after summer break ends and students move back in — that’s when the reality of graduation really sets in.

I think that’s what Meg and I realized that September night at the rooftop bar, surrounded by dresses and suits and foreign accents, wondering how much this vibrant place surrounding us was actually our place. Letting go of the feeling that this could be any other summer we worked in the city, that our professional lives were just practice for later and we could still be going back and accepting that four years of college is actually a relatively small amount of time.

It’s hard to keep that perspective as a student, to really feel how short four years are.

So yes, college was dearly, dearly missed. But we were also thrilled with being in New York and completely in awe of the sights in front of us. We couldn’t stay out until 4 a.m., but there were no tests, papers or job applications in our immediate future.

We were “done for the day,” a brand new concept.

One that we very much liked.

Sara Felsenstein works in television in New York City and keeps a writing and photography blog, sketchingastory.com. Contact her at sfelsens@gmail.com.