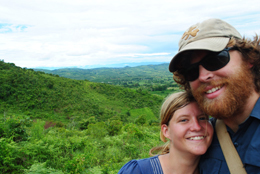 It was midway through the college football season when my boyfriend, Alan, turned to me and said, “Let me ask you something, do you think my long hair has anything to do with the fact that Notre Dame is currently undefeated?”

The question caught me slightly off-guard. Even though we have been dating for more than two years now, it has been a bit of a process coming to terms with the prominence Notre Dame football holds in Alan’s life. This has not been due to any dissembling on his part. He’s been open with me right from the beginning. He even has “Notre Dame athletics” listed under the “Religion” section of his Facebook page. At the time we met, however, we were both living in Malawi serving in the Peace Corps, and the amount of attention he could give Notre Dame football was fairly limited. Consequently, so was my understanding of exactly how important the sport was to him.

I interpreted this as him being sports-crazy and went with it. He certainly wasn’t the first person I’d met whose life revolved around sports. My mother, who lives in Kenya, flies home for a month at the beginning of the baseball season and a month at the end just to watch the Nationals play. As a former sports reporter, I’m accustomed to working with people who judge each other based on how much sports trivia they know or how good their fantasy team is. What I didn’t realize, however, was that what I experienced in Malawi was merely the tip of the iceberg and everything I’d known of sports fans was nothing compared to my boyfriend’s obsession with Notre Dame.

When Alan and I flew to Ireland after his Peace Corps service was complete to watch the Notre Dame/Navy football game, I began to fully comprehend what it was I had gotten into. The entire city of Dublin was inundated with Notre Dame football fans. Everyone in the hotels. Everyone on the streets. Everyone on the buses. Everyone was speaking with an American accent and wearing some form of ND gear.

While in Dublin, Alan and I met up with a friend of his. Having come to Ireland directly from Malawi, Alan was seeing his friend for the first time in more than two years. His friend, in turn, had just gotten married and was in Ireland on his honeymoon. So they had, as one can imagine, quite a lot to catch up on. What did they spend the entire time talking about? Notre Dame football.

As my boyfriend resettled into life in America, I began to understand that this wasn’t just about sports; it was about an entire culture associated with the University. Alan graduated from Notre Dame in ’08 and earned a master’s degree through the Alliance for Catholic Education (ACE) program to graduate again in ’10. His sister graduated in ’11. Their father is an alum from ’73; their grandfather from ’48. When Alan goes to home game tailgates, he’s frequently joined by his whole family. He meets up with friends from his undergrad program then heads to the ACE tailgate to chat with friends from the program there.

So by the time Alan turned to me and asked about the hair, I was pretty well-versed in the Notre Dame culture. But hair length? Making a difference in Notre Dame’s game record? Was he serious?

I suddenly saw visions of our future life together. Saturdays spent at tailgates, a house interior with a noticeably green and gold motif, and minor details — such as hair length, presence of facial hair, or which shirt to wear on Saturday — dictated by the team’s record. Was this really something I wanted?

Then I thought about our relationship as a whole, and how Alan is pretty much the most supportive person I have ever known. I thought about going to the Notre Dame game in Ireland, which, much as I hate to admit it, was actually fun. I also thought about how nice it is for him to have a place and a community he can return to, even after he’s graduated, and how much it has meant to him knowing he will always have that network around him, supporting him, even when he was spending two years in an incredibly small and remote village. Mostly though, I thought about how good he looks with long hair and about how, prior to the football season, he had been considering cutting it.

“I’m not sure I would go so far as to say I think there’s a correlation between your hair length and Notre Dame’s record so far,” I said. “But I do think that if you cut it and they lose you’re going to feel really bad. So maybe you should just play it safe.”

Margaret Sessa-Hawkins is a Creative Writing student at the University of Glasgow, Scotland, who, two years ago, had no idea what the word “domer” meant.