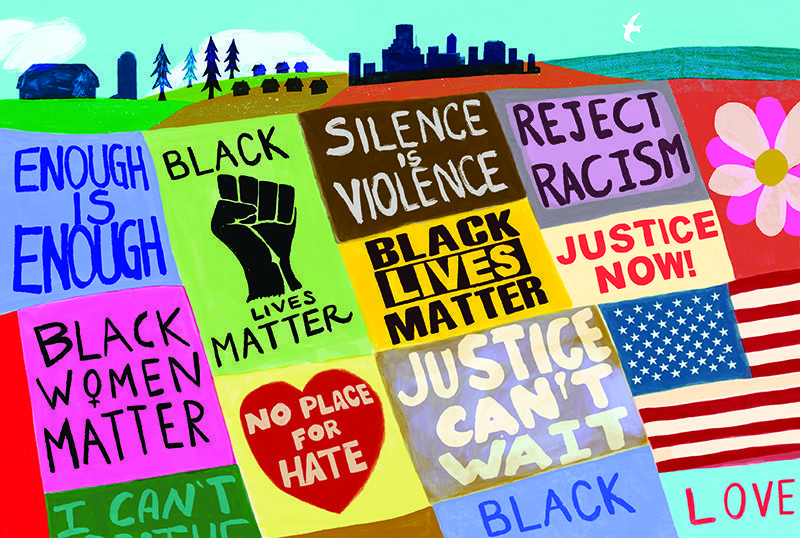 We had an unusual Easter in Minneapolis. I gathered with my family in the living room to watch an internet broadcast of Mass while logs burned in the fireplace and snow fell outside. The snow was thick and heavy, the kind that clings to fences and bends pine branches. A far cry from the daffodils and tulips we expect during that season — and from the brass ensemble of Easters past playing to a packed church: “Jesus Christ is risen today, alleluia.”

But then, in these strange times, I have discovered many varied forms that resurrection can take.

While the coronavirus has not hit our family as hard as others, the uncertainty about how the virus spreads, its impact on the economy and the threat of death have amped my anxiety.

It helped that the first wave came in spring. With indoor services canceled, nature became my church. In addition to my regular morning walk with the dog, I’ve been walking at other times, too, so there have been plenty of opportunities to marvel at the rebirth. The snow gave way to brown grass reviving, trees leafing out, buds bursting into flowers — gradual changes we noted daily until the world was awash in color.

My wife, Maria, and I took particular interest this year in the waterfowl that visited Lake Harriet across the street from our house during their migration. We’ve long appreciated the loons and coots that passed through, but this spring we began to notice many more varieties of birds. Binoculars became required gear on our walks. And so we got to tell red-breasted mergansers from northern shovelers, buffleheads from goldeneyes. Maria was excited to spot a pair of wood ducks — even more so when they had ducklings. Our 20-year-old daughter teased us when we slowed to check out a pileated woodpecker or hooded grebe. “Okay, Birder!”

Despite the interruptions — schools closed, trips canceled, events postponed — I was grateful for the way the pandemic slowed down our lives and that we were given the grace to take advantage of it, to see more closely the world about us.

So many of us were out walking that the city closed the parkway around the lake to cars in order to make more room for pedestrians. I saw neighbors, friends and old acquaintances, which took the edge off the isolation of the stay-at-home orders. I also came to recognize others who regularly walked or ran at the same time and befriended them with mutual smiles and greetings, a sort of daily communion.

My friend Tom started baking bread to keep himself busy. He began with the goal of giving away 25 loaves. Then 50. But as the weeks turned into months, he gave away so many loaves he lost count. Shortly before the shutdown, Tom had seen an elderly neighbor taken away in an ambulance. When he saw the man’s wife weeks later — they had hardly spoken before — he asked how her husband was doing. “He died,” she replied. So Tom baked her a loaf of bread and left it on her doorstep. She thanked him with a plate of brownies on his doorstep the next day. Now they are friends, and they often exchange conversation and baked goods.

I have clung to such stories to stay positive and maintain my faith in humanity.

In late March, Heather, a neighbor in despair over the virus and looking for a project to keep her two young sons busy, chalked a “Thank U” message to health care professionals, first responders, postal workers, grocery store employees and others on their retaining wall, which faces a busy street. People driving by honked, waved, stopped to take photos. Some got out of their cars to thank her. When rain washed off the chalk, Heather and her boys restored the message with paint. People asked for replica yard signs. They printed some. The media picked up the story. Within a couple of weeks, they had shipped more than 1,000 yard signs to 26 states. “What started as a way to keep busy and to prevent myself from going further down a rabbit hole of fear quickly evolved into a beautiful way to connect with neighbors and community — even while social distancing,” Heather told me. “Gratitude really is a thing!”

And then we watched the video of a white cop in our city kneeling on the neck of a Black man three miles from our house — and it took the air out of all of us. We each died a little death there on the street with George Floyd, the weight of racism choking us yet again.

That week the frustration and rage gutted our city with angry shouts and popup fires, tear gas and rubber bullets, shattered windows and burnt buildings. The police station went up in flames. Military helicopters flew overhead, smoke climbed above the trees, flash bombs echoed in the night. We got Zoom meeting updates daily from our city council representative, tuned into the governor’s frequent briefings and watched the local news to track the violence.

The rage intensified throughout the week, not just in our city but in seemingly every city across the country and beyond, the collective pain of a people that cried out so loud it could not be denied: Enough! The vast majority of the protests were peaceful, yet hundreds of businesses burned on those nights. Scores of stores were looted. Many small business owners, already reeling from revenue lost to the virus, were gutted.

On one of my morning walks that week, I saw graffiti spray-painted in black capital letters on the path directly across from our home: “F- - - police. F- - - white people.”

It shook me. Our neighborhood is mostly inhabited by people of white privilege. Until that moment, it had felt pretty safe. But the graffiti suddenly made the violence I’d witnessed in the video and the anger in the protests personal.

Quite literally, it hit home. This was not simply a situation on the news — which could be turned off — but one outside my front door. The rage accumulated over years, fueled by countless microaggressions — and now yet another blatant murder of a Black man by a white cop — was a finger thrust into my chest. It called out my complicity as a white homeowner in a system rigged in my favor and against African Americans.

That same morning, at the point in my walk where I usually turn around, I saw that on the edge of the walkway, overlooking water sparkling in sunlight, someone had chalked a two-by-three-foot rendition of Matisse’s Goldfish. It was done in brilliant color and detail. The sight was a joy to behold.

The art lifted my spirits, but it couldn’t cancel my complicity. The graffiti was still there on the way home. It has plunged me and my white neighbors into many thoughtful discussions about the need to confront the way we have been socialized, admit our implicit racial biases and learn new ways of thinking and acting. Drawing upon my experience recovering from alcoholism and drug addiction over the past 38 years, I know this will be a daily struggle. As they say, “We claim spiritual progress rather than spiritual perfection.”

Meanwhile, Goldfish began to appear around the city, with artists painting messages of hope and love on the plywood covering store windows that had been smashed by vandals. “Everyone interconnected together.” “When we know justice, we will know peace.” “Minnesota Strong. We Stand Together.” “We mourn with you.” “Love thy neighbor.” “Rest in Power, George Floyd.”

These messages appeared with beautiful murals in the Uptown business district a couple of miles from our house. Maria and I walked amidst them on a bright Sunday morning. They gave us hope that love could triumph over hate, faith over fear, hope over despair.

The messages came in more than words. People throughout the city cleaned up stores ravaged by rioters. They swept broken glass off the sidewalks. Boarded up windows. Sorted salvageable merchandise from damaged goods. Mopped flooded floors. This was the spirit of Minneapolis — the human spirit — rising from the ashes. The best in us coming forward, shining through the darkness of the destruction.

When the call went out for food to give families whose neighborhood grocery stores had been destroyed, a local middle school asked for 85 bags along with items such as diapers and detergent. Cars lined up for miles with people who donated more than 30,000 bags, a modern reenactment of the loaves and fishes miracle.

Our son, whose high school graduation consisted of his sitting on the living room couch in his mortarboard and listening for his name to be called in the virtual ceremony, and our daughter, who had attended her spring-quarter college classes online, engaged us in many spirited discussions as we all grappled with how to work toward racial justice and police reform. Both of them volunteered to deliver medical kits and water to aid stations serving the protesters. I attended a sit-in on the state Capitol lawn with my daughter amidst tens of thousands of young people who inspired me with their idealism and drive.

Though months have passed, we cannot forget those critical weeks. We must face the brutality and evil among us. Root out our own inherent racism. Reconcile our fear of death laid bare by the virus, yet avoid the despair that can sink us into cynicism. I have chosen to look for the good within us, among us, to try to find the best in you that will kindle the best in me. So that we will not forget but somehow, together, raise up one another.

I had made the pilgrimage to 38th Street and Chicago Avenue, where Derek Chauvin killed George Floyd, early that first week. The mood had been somber. A thirtysomething Black woman on her knees sobbed outside Cup Foods. A young Black man in a hoodie saying “I CAN’T BREATHE” on the front and “AGAIN” on the back filmed the multitude of bouquets and signs along the storefront. A teenage white boy reverently took a knee to add flowers to the memorial.

When Maria and I returned almost 10 days later, the memorial had grown. The signs and flowers had proliferated. Dozens of names painted on the pavement stretched up Chicago, demanding justice for Eric Garner, Breonna Taylor, Philando Castile and others killed by police. More names would be added — like Rayshard Brooks’ the next day. Hundreds of people of all backgrounds milled about, paying their respects.

Most strikingly, a large black fist had been erected in the center of the intersection, ringed by more flowers and signs. The fist rose up out of the pavement 10 feet, clenched against the sky. A symbol of resistance and resilience. And when I saw it, the words of Maya Angelou — which had been painted on an Uptown window — rang in my ears, “You may write me down in history with your bitter, twisted lies. You may trod me in the very dirt, but still, like dust, I’ll rise.”

John Rosengren is a freelance writer and  author of nine books. His novel, A Clean Heart, was published in May 2020 by Mango.