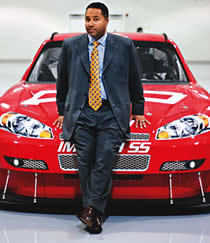 Max Siegel ’86, ’92J.D. has yet to slow a pace that began with life literally on the run. The fast lane has taken Siegel from dealing with artists at the top of the Billboard and gospel music charts to representing world-class athletes and blazing a trail for African Americans on the NASCAR circuit. He commuted from his hometown of Indianapolis by plane to New York and North Carolina for a decade to keep his family grounded while he kept running.

A few crashes along the way — such as the defection of Dale Earnhardt Jr. from the racing team his father founded and the death of NFL superstar Reggie White on the verge of starting the first black-owned NASCAR team — have only refueled Siegel’s drive. He has not given up the race team dream. Few who know Siegel, including his long-time mentor and Notre Dame athletic director Jack Swarbrick ’76, have any doubt he will succeed.

Seated in an upscale conference room at the Indianapolis firm of Baker & Daniels, his phone constantly buzzing, Siegel, 44, is back where he started his law career. Yet his experiences as an agent, music executive, intellectual property rights attorney and entrepreneur landed him this year in his mentor’s old job as head of the firm’s sports and music industry practice. His style is soft-spoken, and an electric blue tie is the only nod to the flashy side of his trade.

“I’ve always tried to learn what makes someone tick, figure out their goals and meet them at a human level,” Siegel says. “I did it instinctively early on to survive. I didn’t pay attention to it as a system until recently.”

It doesn’t hurt that Siegel has never been star-struck, allowing him to give tough-love advice to athletes and singers who sometimes lost money despite their talent. Among his many projects in progress is his second book of business advice. Another is a movie script based on the last summer of life on the road before his father died at age 37.

William Siegel was an executive in the 1960s at Vee Jay Records, the label that was the first to sign The Beatles. The company later lost a costly legal battle over the band’s rights. Siegel’s mother was Delores Frazier, a gospel and blues singer who toured and made records in the late 1950s and early ’60s. These childhood experiences let him see both the promise and the pitfalls of the entertainment business.

Then one day William took Max and his sister, Traci, on a CBS Records sales trip. They traveled the Native American reservations of the Southwest and restocked displays of record titles, constantly moving for seven years in what was essentially a kidnapping from Max’s mother.

“It was a traumatic experience,” Siegel says of the separation. “My survival instincts must have kicked in, and I tried to make the best of it.”

He had the bittersweet opportunity at age 12 to talk candidly with his father about the meaning of manhood during that last summer before cancer took William’s life. His mother found the siblings nine months later and returned them to Indianapolis.

“From my mother, I learned work ethic and being transparent with people,” Siegel says. “My father taught me the importance of building relationships and having the hustle to use them to build opportunities.”

Swarbrick recruited Siegel to his sports business legal practice in Indianapolis in 1992. “He’s a very commanding presence,” Swarbrick says. “He’s charismatic, and he has the remarkable creativity and drive that is the essence of an entrepreneur.” Swarbrick says Siegel excels at building coalitions because he’s fundamentally optimistic; his talent is in convincing others to share his willingness to take risks.

That approach served him well when the Hall of Fame baseball player Tony Gwynn offered to make Siegel his attorney and then agent when Gwynn and his wife, Alicia, needed someone to trust. The relationship has blossomed over the years and was special enough to make the San Diego-based Gwynns buy a winter home in Indianapolis.

During the four years after law school, Siegel estimates that his growing stable of music clients cornered 80 percent of the black gospel music market. In 1998, he took a consulting job in New York that turned into a series of music industry positions. Siegel became president of Zomba Gospel and vice president of the Zomba Label group, where secular artists include R. Kelly, Britney Spears and Justin Timberlake.

Siegel commuted to New York at that time while his wife, Jennifer Satterfield-Siegel, was building a pediatric dentist practice in Indianapolis. Because of his wife’s work and his life on the road as a kid, Siegel says he wanted a stable environment in Indianapolis for their three children: Max (10), Matthew (8) and Madeline (5).

Siegel began working in North Carolina when his relationship with football player and racing fan Reggie White led him to NASCAR. He became president of Dale Earnhardt Inc. in 2006 after talking about creating opportunities for minorities in new arenas with then-Colts football coach Tony Dungy. That’s the sort of people Siegel turns to in his Rolodex. At a young age, he says, his interest “turned from success to significance.”

He was ready to start the first black-owned team when White’s sudden death unglued the enterprise. Besides his roles as a lawyer, agent and business owner, Siegel also directs NASCAR’s effort to improve diversity and is pursuing team ownership again.

Based on his track record, look for Siegel’s drivers to be kissing the Speedway bricks in future celebrations. He’ll be the one making sure the stars cash in on their success.

Brendan O’Shaughnessy works in communications for Notre Dame. His articles have appeared in this magazine, The Chicago Tribune, Chicago Parent and The Simon and Schuster Short Prose Reader.