When I was little, God had a beard. He wore a blue robe, his hair grew thick as jump ropes and he was very, very old. When I learned someone named Mary was God’s mom, she confused this picture, so at first I didn’t care for her much.

When I was 6, my mom buried a statue of Saint Joseph in our garden, a bit of Catholic-flavored voodoo that was supposed to help us sell our house.

“Who’s that?” my sister, Devin, had asked, pointing to the statue.

“That’s Mary’s husband,” my mom said, hoisting Joseph up by the ankles and shoving him headfirst into the dirt.

“No!” I remember screaming, grabbing for the statue, my fear divided into equal pieces: because Mary’s husband couldn’t breathe in the mud, because we might move away, and because our hamster, Mr. Whiskers, had recently choked on a Cheerio and was interred in the same garden. If this moment counts as a religious experience, then this was my first.

I thought Notre Dame was in Michigan until I applied. I revered the whole without knowledge of its pieces: the same could be said of my faith. My sister and I grew up attending church occasionally, my father humming along tunelessly to the organ, Devin belting out the chorus when she knew it, and me squirming in white tights, hoping Jesus could hear both of them. During freshman orientation at Notre Dame, my family attended the opening Mass with respect and sincerity, but I could tell by the shuffle of our programs that we all felt a bit awkward.

Afterward, my sister blinked at the Dome, shining above us like a golden planet. “So Our Lady,” Devin said, puzzled, “is Mary?”

At Notre Dame, Mary was hard to avoid, and I found comfort in the idea that I could pray to her to pray for me. The first few weeks I mouthed the prayers I had recited as a child, my voice soon joining the others in the Lyons Hall chapel. I realized I had never forgotten the words, I just hadn’t said them in a while. I would walk to the Grotto after class or after a meal in the dining hall, tucking my feet up on a bench, trying to pick one flame out of the hundreds that flickered together. I would think then of Father Theodore Hesburgh’s assertion that while Mary might visit other shrines around the world, she made her home at our Grotto by the lake. The bench growing colder, my legs falling asleep, I wouldn’t know what I believed, exactly, except that I believed.

My junior year, I studied abroad in Rome. Here I learned that praying through Mary was a distinctly Catholic practice, a fact that made me strangely, intensely proud. My daily walk to school led me past a market, clogged with clucking nonnas wheeling shopping carts, and through Saint Peter’s Square, where the columns seemed to start in the sky and continue straight down through the earth. I had never known the world was so old.

A theology professor told our class that Pope John Paul II had been shot in Saint Peter’s Square in 1981. As he collapsed, the story goes, the pope cast his eyes from the obelisk to the dome and among the columns, searching for an image of Mary and finding none. When he recovered, he chose a spot on the wall of the Vatican, close to his apartment and visible from the square, to be inlaid with a mosaic of Mary.

Maybe because I was so far from Notre Dame, and so far from my own mother, this story stuck in a place under my ribs: looking for Mary, and making her. When the pope died that spring of 2005, I imagined that he saw her one last time, when he needed to. 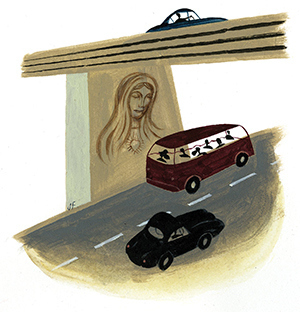 When I graduated from Notre Dame, I moved to Chicago and began teaching high school on the west side of the city, in a neighborhood Teach for America referred to as “underserved.” Each morning, my bus would run underneath the Kennedy Expressway, where an oil stain on the ramp’s wall had bloomed into the shape of the Virgin Mary. She appeared in profile, gazing westward with the flow of traffic, her cloak wispy and her features mostly abstract. Bleary-eyed, I looked at her every morning, and though I never saw her pilgrims, I noticed they kept her surrounded by stacks of fresh flowers. The highway roared above and garbage blew in from both sides. When she had first appeared, the news reports called her “Our Lady of the Overpass.”

I would think of the overpass at the end of long days, when the streetlights would click on and seep into my classroom. It was around this time I would start crying, because I hadn’t finished my lesson plan for the next day or because many of my students couldn’t read or because the Mary I knew now lived only a few blocks from me, under a highway, lonely and actually a bit ugly, if I were honest. My students needed someone to believe in them, and I was scared that perhaps I didn’t believe in anything at all.

To ward off these feelings, I would try to conjure the Grotto, where I had knelt with so many supplications: Please let me get into Notre Dame. Please let me study abroad in Rome. Please let me be a teacher. I had received exactly what I had asked for, I realized. I shortened my prayer one night, so it might be interpreted with greater wisdom and so I could repeat it throughout the day: Please. Please. Please. Back at my apartment, I would light my own candle from the Grotto, a gift to every senior when we graduated, and I would sit on my bed, watching the flame. I hoped that Mary, the real one, would see it. If I had been pressed to explain, I might have said I was praying to go back to Notre Dame, where everything, including belief, had seemed so simple.

On Halloween that first year, my students interrupted my lesson to tell me the story of La Llorona.

“Is that a soccer team?” I asked them.

“What!” they cried, indignant.

La Llorona originated as a Mexican folktale. According to the legend, a woman named Maria threw her children into a river in a ferocious rage, and then died of sadness and regret. La Llorona is Maria’s ghost, wandering darkened roads for eternity, wailing.

“But if you hear her, Miss, you never stop,” my favorite student, Cesar, warned me. “Because she scratches you. Scratches you dead.”

Here was a mother who had forsaken her children, a figure that struck me as helpless and miserable. This image stung more than I wanted to admit. I wasn’t helpless, and I wasn’t a mother, but as a teacher I felt the shade of both.

“Let’s get back to work,” I told the class, rapping the chalkboard. I had been looking for Mary and found only a ghost.

I moved apartments that summer, and later moved again, and again, each time carefully wrapping and packing my Grotto candle. I quit teaching, went back to graduate school, and found a new job that didn’t make me cry. I spent the weekends with my Notre Dame friends, the ones who knew me first as a student and then as a teacher and now as something like a grown-up. I stopped praying to return to Notre Dame. Slowly, I stopped looking for Mary, because I didn’t need her as much.

I kept in touch with a few of my students, including Cesar, after they graduated. Later, when I was well-entrenched in an office routine of coffee-spreadsheets-metrics, I learned that Cesar’s mother had died. The funeral was held just a block from our old school building. I decided to attend precisely because of the ferocity with which I didn’t want to.

The church consisted of one room, crowded and hot, and I took a place at the back. A woman sat at the front near the casket, leading the room in prayer. The mourners would respond, their words in Spanish and their voices one voice. I thought of La Llorona, the folktale I feared had been some terrible version of Mary, a distortion and a fraud. And I thought of Notre Dame, when I had felt so uncomfortable at my first Mass.

I could recognize most of my students by the back of their heads, I realized. We had all grown, and time had passed, and I had conjured many Marys in my life — in gardens and caves and in the words of Father Ted, in Rome and home and under a bridge. I had worried that my many Marys had somehow diluted her. Really, I had been trying to carry her with me, as best I knew how. And she had been there, patient. My path to her, and through her, was flawed and strange and yet continues on, and what I believe now is that it always will.

Ashley Sinnott’s essay was one of four second-place winners in this magazine’s 2013 Young Alumni Essay Contest. The author lives in Chicago and works for the University of Chicago, where she also received a master’s degree.