Try to pin Greg Bahnsen down and you may need to wait a while. When he isn’t casting metal and fashioning it into pipes at Paul Fritts’ organ workshop in Tacoma, Washington, he’s often thousands of feet up in the air.

Bahnsen is a member of the Puget Sound Soaring Association, a getaway for gliding enthusiasts — pilots who enjoy the challenge of returning unpowered aircraft to earth while responding to whatever the atmosphere might throw at them. 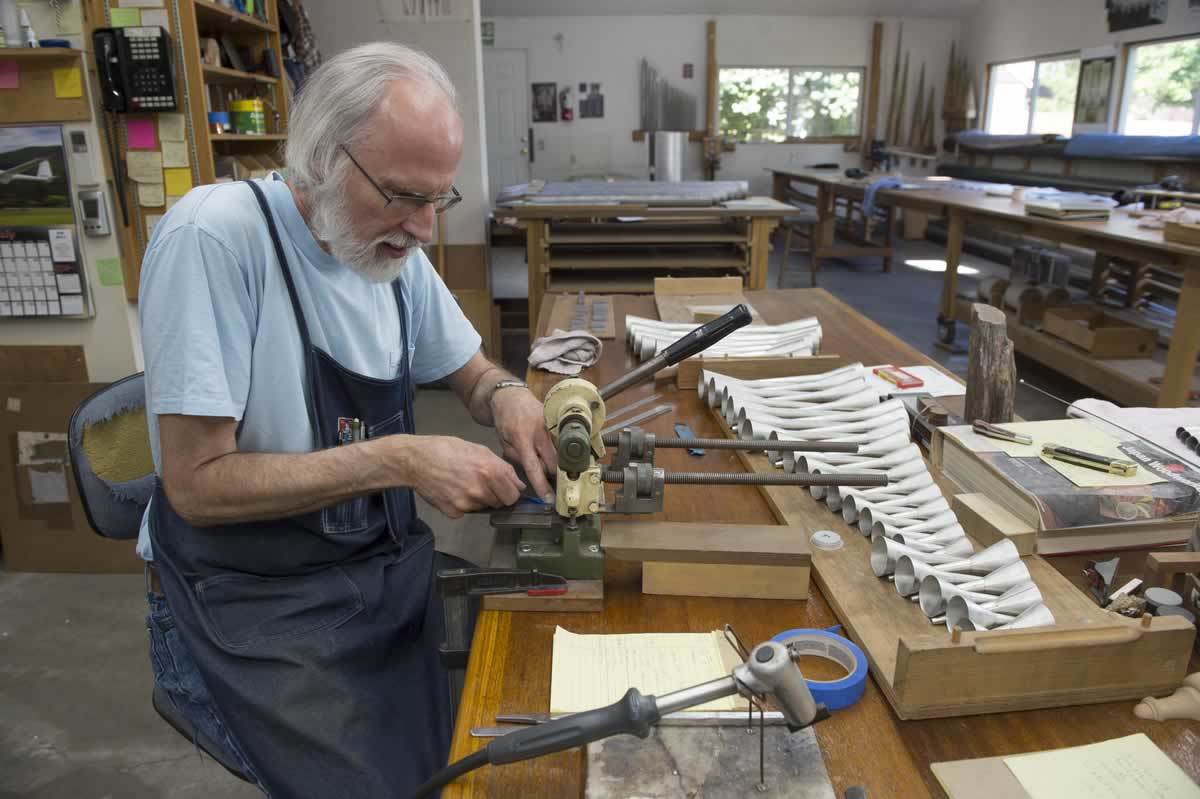 “It kind of gets flying down to the basics,” he says. “No two flights are the same. It’s always a matter of, okay, I’m released from the tow plane, what can I do with the variables up there this time? That’s part of the fun. And then you’re out there where it’s beautiful anyway.”

It doesn’t take much effort to appreciate the blend of faith and skill that attracts Bahnsen to his favorite weekend pastime, or to see the parallels between flying gliders and the path he’s followed in life. Ask him how he became an organ builder nearly 23 years ago and he’ll say, without a second’s hesitation, “Well, God led me here.

“The road has been winding,” he says. In no particular order, he’s done professional electrical work, a little freelance photography. He’s been a nurseryman, a jailer, the head baker in a bakery. He spent 10 years in furniture manufacturing and another 10 in graphic arts and printing. “I’ve done basically everything in printing from one end of the shop to the other,” he says.

“I prefer design. But, anyway.”

In 1993, he was living in Walla Walla, a small city in southeastern Washington, getting frustrated with a dead-end job and praying either to find something else or to receive the strength to continue. For a long time it seemed no answer was forthcoming to these prayers.

Then came one of those atmospheric variables he now enjoys as a glider pilot and stunt-kite flyer: Someone vandalized the pipe organ in the fine arts auditorium at Walla Walla College, where Bahnsen was singing in a few of the choirs. The versatile craftsman had some experience making instruments, so he volunteered to help fix it. The college hired him to catalog the pipes and send them for repair to an organ builder near Tacoma named Martin Pasi.

That professional connection paid off when the printing company laid him off a few months later. Pasi didn’t have an opening in his own shop, but he thought his former employer might, so Bahnsen contacted Paul Fritts. “I called him, we chatted. I gave him a run-down of my skills and my bag of tricks. He said, ‘Well, you sound like an organ builder.’” Soon Bahnsen had a job offer, and the smooth landing he was looking for.

He started in the woodshop working on Fritts’ Opus 16 for a Lutheran church in Tulsa, Oklahoma, building large wooden pipes and most of the organ’s case. Eventually he moved into the pipe shop. He likes both sides of the business and breaks free from the tin and lead “once in a while, to butcher some wood.”

Pipe making has more rhythm to it, he explains, but it can also become tedious. “Like when you’re doing a mixture stop,” in which a single key plays chords through several pipes at once. “Instead of 58 pipes per stop, you’ve got 400-and-something,” and they’re often tiny. Bahnsen took a photograph of the smallest flue pipe he made for the basilica organ, placing it next to a penny for perspective. “There’s a lot of fussy handwork going on in making those,” he says. You go cross-eyed after a while.

No doubt his hobbies — the gliding, the choral singing, the knitting, the custom stone-cutting — keep him going. Yes, Bahnsen cuts and polishes precious and semi-precious stones, too, mostly as favors to family and friends, and occasionally for area jewelers on a freelance basis. He shows visitors a luminous Coober Pedy opal and a jazzy lapis lazuli of which he’s especially proud, and mentions a Blue Star sapphire he’s cut for ring that a relative designed for his fiancée.

“I cut an opal for a ring for my sister and she wore it to their company Christmas party, and her boss’ wife fell in love with it,” he says. The employer asked Bahnsen’s sister, Dee, if her brother might cut a stone for his wife. While Bahnsen couldn’t respond in time for Christmas, he had it ready for the woman’s March birthday.

That “wow” factor is part of what attracts Bahnsen to organ building, too — the satisfaction of seeing a client’s awe at the job well done. “No planned obsolescence in our shop,” he adds, “and we are always striving to improve our products.”

So maybe there’s no need to pin Greg Bahnsen down. He admits there’s only one thing that could possibly pull him away from his current arrangement.

“If I were to be able to teach flying and make a living at it, I would probably say, ‘Sorry, Paul, it’s been a good run.’”