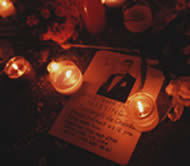 Within hours of the horrific massacre of 32 people on April 16, 2007, at Virginia Tech, a spontaneous memorial sprang up at the site. Students and well-wishers streamed to the place of the tragedy, leaving flowers, teddy bears, notes, balloons, sympathy cards, candles and other tokens of grief.

Such spontaneous shrines have become a standard mode of grief expression in modern Western society, says Erika Doss. The Notre Dame professor of American studies, who is the author of the forthcoming book Memorial Mania, notes that the ritual has become commonplace, repeated whenever an unexpected tragedy happens, ranging from the thousands killed on 9/11 to a single teenager’s car crash on a country road.

“Temporary memorials may not be especially new, but they are, I believe, becoming more widespread as the phenomenon of ‘memorial mania’ continues,” she writes in an essay published by Amsterdam University Press.

Typically the memorials include notes and cards that “give voice to the grief stricken and permit intimate conversations with (and confessions to) the deceased,” stuffed animals that refer to lost innocence, and other artifacts that “permit, encourage and release grief.” More than 200,000 items were left at the temporary memorial for those killed at Columbine High School in Colorado, while 15,000 tons of flowers were left at the various memorials for Princess Di.

Doss says temporary memorials rarely, if ever, contain images of the deceased either dying or suffering, and they almost never refer to the circumstances of death. Instead, they always focus on commemorating the life of the deceased.

In the United States, the art historian says, the practice of roadside memorials traces its history at least as far back as the 18th century American Southwest practice of descanos, which are wood and stone memorials erected for those who died suddenly and were buried in unconsecrated ground.

The “instant memorial” also has been adapted in nontraditional ways. Last fall, when the Chicago Cubs were eliminated from the Major League Baseball playoffs with a disappointing loss, fans leaving the game immediately began erecting a temporary shrine outside Wrigley Field.

The disgruntled spectators left torn-up Cubs posters, cans of Old Style beer, flowers, candles and nasty notes to express their frustration and grief. “It feels like somebody died,” a fan told the Chicago Sun-Times.