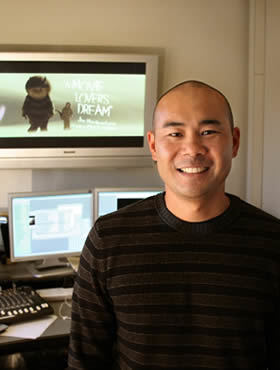 Scott Mitsui, Notre Dame class of 1992, is upfront about what’s involved in making a movie trailer.

“We cheat a lot,” he tells the audience at his “Making the Perfect Movie Trailer” workshop.

Oh, nothing illegal. But Mitsui freely admits that movie trailers, which serve as “an introduction of your movie to the world,” must do what’s necessary to fulfill their sole job: “to get as many people as possible to that opening weekend.”

The creative producer/vice president of operations at Mark Woollen & Associates was at Notre Dame in October as part of the alumni documentary film festival, sponsored by the Department of Film, Television and Theatre. While there to show his documentary film, Jam, Mitsui also dedicated an afternoon to explaining the philosophy and mechanics of creating an award-winning trailer.

He would know about that. Mitsui’s role at Woollen includes writing, editing and graphic and sound design for the company that has created trailers for such movies as Where the Wild Things Are, A Serious Man, Slumdog Millionaire, Milk, The Wrestler and Crash.

As he walks the audience through the making of the trailers for Slumdog Millionaire and for Milk, Mitsui notes that what you get in a trailer is perhaps not precisely what you will get from the movie. Often the music used for a trailer isn’t actually what’s used in the film. The dialogue may be speeded up; composite shots are used. And since work on a trailer may begin before the movie is finished, he says, the trailer could include scenes that don’t make the final cut of the movie.

Trailers come in two lengths — the 90-second teaser and the two-and-a-half minute traditional. They also come in two ratings formats — the G-rated green band and the R-rated red band. The Motion Picture Association of America (MPAA), he says, looks at trailers with a stricter eye, and breaking their rules means the trailer must be redone. No trailer, for instance, can show blood, smoking, nudity or guns pointed directly at a person. Unlike green-band trailers, however, red-band ones can include profanity.

Multiple trailers for a movie generally are made for different markets, too — TV spots can be changed to target children, teens or adults. Some also are re-purposed for different international markets. Trailers to be aired in Japan, for instance, may concentrate on a romantic aspect of a film, Mitsui says, since audiences there seem to like the love angle.

The creative process of making a trailer is easier, Mitsui says, if he actually likes the movie. “I hate working on bad films,” he admits, but is careful not to name names. He adds, however, that he’s happy to work on good, artistic films. “I feel better when good movies we work on make a lot of money.”

In the end, he reminds the audience, the movie industry stays alive only if it sells its product. “It is ultimately about commerce.” And if they wish to join the industry, Mitsui tells the students, they have to help it survive. Their role in that regard is simple: “Go see movies.”