What Mbuyiseli Madlanga ’90LL.M. most remembers about growing up under apartheid in South Africa wasn’t so much the daily indignities of a system based on racial subjugation. His childhood in the black homeland of Transkei was too segregated for much contact with white people. 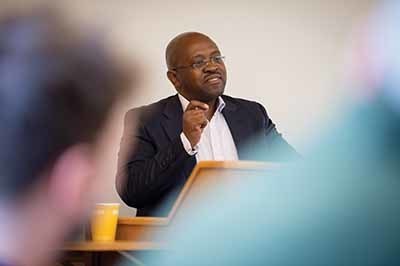 Instead, he remembers the constant sense of risk and threat.

“Apartheid was so pervasive it affected everybody and it affected me as well,” Madlanga said.

He recalled a trip from Transkei to visit his relatives in Johannesburg. He didn’t have any passbook, much less official permission to enter white South Africa. He and a cousin risked travel on a crowded train to visit an aunt during a holiday. The station in Soweto was jammed with people when he spotted the police checking passes.

“The police literally chased us like animals,” Madlanga said. “And we had to run up the stairs into the station and out on the street. . . . If they catch you, they ask for your pass, and if it’s not in order, you get arrested.”

Vinodh Jaichand ’88LL.M., ’96JSD remembers being thrown off his family land. He grew up in an Indian family on a farm outside Durban. His grandfather grew bananas and mangos and gave Jaichand’s father, a cabinet maker, an acre to build a house. Jaichand grew to love the farm, knowing just where to search for snakes or frogs or the best mango tree to climb to eat the fruit.

“We lost that land to the Group Areas Act, which designated that part of town to be white,” Jaichand said. “We were forced to leave when I was 16, and I was very angry about it.”

Madlanga is now a justice of South Africa’s Constitutional Court, the final arbiter of the country’s law. Jaichand is the dean of the Oliver Schreiner School of Law at the University of the Witwatersrand, which he had not been allowed to attend because it was an all-white school under apartheid. They share the distinction of being early graduates of the master of laws program in international human rights at Notre Dame.

These two symbols of the tremendous transformation of post-apartheid South Africa returned to Notre Dame with three other early program graduates for the April symposium, “Engaging Justice in South Africa.”

The seeds for the international program at Notre Dame were sown in the 1980s when Richard Goldstone, a white South African judge using his insider position to fight apartheid, met with Rev. Theodore Hesburgh, CSC. The legendary civil rights reformer asked what Notre Dame could do to promote justice in South Africa. Goldstone responded, “Educate our lawyers.”

The resulting program, housed in the Center for Civil and Human Rights, was created to apply lessons from America’s civil rights movement to apartheid. It soon expanded worldwide and has since educated more than 360 lawyers from at least 90 countries across the globe.

Jaichand arrived in January 1988 as the first student. The fledgling one-year program offered him a room in the infirmary until a permanent place could be found.

“I joked that I know I come from a sick society,” he said, “but why was I put in the infirmary?”

After graduation, Jaichand worked in human rights law for many years, including nearly a decade at the Irish Center for Human Rights. Inspired by his family’s eviction, he specialized in land restitution issues until finally landing at Witwatersrand as a teacher.

The third-oldest university in South Africa now has a population that is about 70 percent black. Jaichand is often called its first black dean, despite being Indian. The historic alternative, he said, was being “categorized as non-white, and I preferred not to be known by a negative.”

Madlanga came to Notre Dame in 1989. He had been studying at the University of Transkei when the police in South Africa were cracking down on members of the African National Congress, the party Nelson Mandela helped start and would later lead.

Student activists supporting the cause brought classes to a halt, so Madlanga worked part time in a magistrate’s office, where he would often meet with security police. However, some of the student activists were Madlanga’s friends, and he helped them hide during the day. At night, he would sneak them out over back roads on his motorcycle. The police would later kill one of these friends and force others into exile.

“If you were a South African with a conscience at all, you just had to play a role, even if it was a small one, in the bigger scheme of things,” Madlanga said. “If a security policeman were to apprehend one of the people I was living with, they would probably be given a prize for this big arrest. I would think, deep inside me, if only you knew that I actually held the people you are looking for. If you knew, I would be in serious trouble.”

He escaped trouble, and in 2000 he was appointed a justice of the Constitutional Court. “Things happen very quickly,” he said. “I couldn’t have imagined it when I was watching Mandela get released from prison on TV while at Notre Dame.” After leaving the court in 2001 to go into private practice, he was re-appointed in 2013.

The court’s primary role is to protect South Africa’s constitution, which guarantees legal and political rights regardless of race. It’s been more challenging, according to the symposium’s participants, to make progress on socio-economic equality. Madlanga said the court has built a formidable record of jurisprudence since 1994, but it will take time to dismantle decades of apartheid and centuries of colonial subjugation.

“A lot has been achieved, but more still has to be done,” Madlanga said. “Some 22 years of freedom is not enough to redress all those problems.”