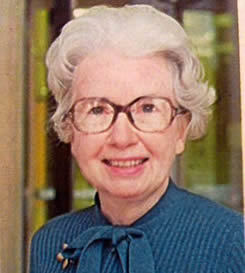 When I got the call last week that my longtime friend Elizabeth Christman had passed away in St. Louis at age 96, I was flooded with memories.

Liz Christman, a retired Notre Dame professor of American studies, was a kind and dependable friend to all who knew her. Even in her later years, as Liz bravely faced illness and gradually had to surrender her independence, I never knew her to be anything but patient and upbeat.

Liz started teaching at Notre Dame full time in 1976, during the early years of co-education. The university couldn’t have hired a better teacher, mentor and role model for women students.

Born before World War I, Liz graduated from college during the Depression and joined the WAVES, an all-women division of the U.S. Navy, working in Washington D.C. as an editorial research officer during World War II. After the war, she moved to New York and spent more than 20 years working at Harold Ober Associates, a literary agency that handled such clients as J.D. Salinger, Agatha Christie and William Faulkner.

In the 1960s, Liz enrolled in night school at New York University and earned a master’s degree, and began working on a doctoral degree in English and American literature. Then she made a bold and dramatic decision: In 1969, she resigned from her longtime job and moved to Greencastle, Ind., to become an English professor at DePauw University

“When I was 55 years old I changed my life: I left my work in a New York literary agency and became a teacher in a small Indiana college. I left a city of eight million for a town of eight thousand. I left one of the most dynamic centers of music and literature and theater and art in the world for a place where there wasn’t even a full-time movie house,” Christman wrote in a memoir. "These deprivations didn’t matter to me. I was exultant to have been able to get a teaching appointment at my age, with no experience, and without a Ph.D.” She soon finished the doctoral degree.

What a fortunate turn of events for DePauw and, a few years later, Notre Dame undergraduates.

Her literature and writing classes were a treat. And the Juniper Press book-publishing course she developed was so popular that sometimes lotteries were required to enroll in the class.

We kept in regular touch after I graduated. The formal “Miss Christman” of college days easily transitioned into Liz, as she was known to all her friends. Over lunch we talked about current events, theater and books — always books. She particularly loved Henry James and Anthony Trollope.

Liz never lost her eagerness for learning and self-improvement. Well into her 80s, she took daily walks. But ordinary exercise was just too dull for Liz’s active mind. She carried index cards on which she had copied poems. As she walked, she glanced at the cards and memorized the lines. If it was good to exercise the body, Liz figured, it was even better to exercise the mind, too.

She was active in the South Bend community, participating in bridge clubs, teaching classes at the Forever Learning Institute and volunteering for years as an adult reading tutor.

In her retirement years, Liz and I would meet for dinner and to attend arts events together at the DeBartolo Performing Arts Center on the Notre Dame campus. She loved film, opera and classical music. I recall one stage musical we attended that didn’t live up to the advance hype. The first half dragged, and I wondered if Liz was having similar thoughts. When the lights went up at intermission, she turned to me and said simply: “I prefer Trollope.” By mutual agreement, we left that performance early.

My favorite photo of Liz is one published some years back in Notre Dame Magazine. It accompanied a column she wrote recounting the joys of teaching about the works of Henry James. In the photo, Liz stands smiling in a plaid dress, white hair perfectly coiffed, pearls at her neck and a thick copy of Henry James: A Life held closely in her left arm.

That’s the way I’ll always remember Liz Christman: elegant, wise, gracious and cultured. She accepted the world on its own terms and embraced it.

Margaret Fosmoe ’85 is a staff writer at the South Bend Tribune.