Strips 116-119 of the popular comic strip Molarity, which previewed in The Observer in 1977, continue to follow the protest over the housing lottery. The double strip takes a look at the excitement of a close football bowl game.

116. Regular readers will know that anytime Emil is mentioned it is Emil T. Hoffman, the chemistry professor. Here a student receives word of her miraculous achievement. Meanwhile the headline of this, the last Observer before the Christmas break, is Edmund Price announcing the procedure for the housing lottery, which will put some juniors off campus for their senior year. 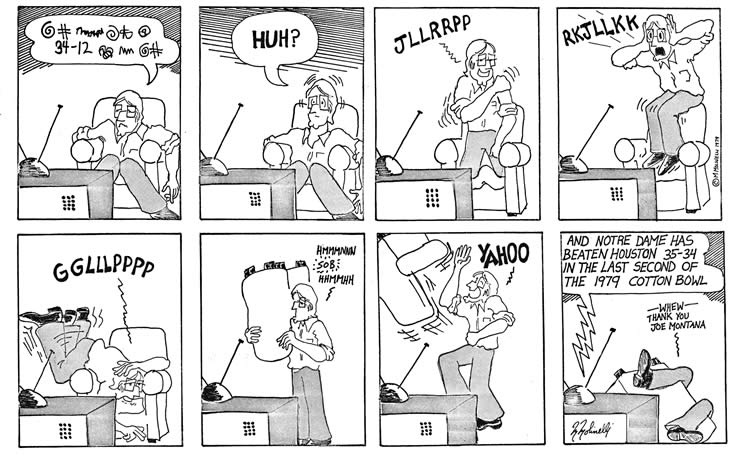 117. This cartoon, the first after the Christmas break, is an illustration of fan emotions as we watched the 1979 Cotton Bowl, now referred to as the “chicken soup” game. The first panel is how we felt with 7:37 seconds remaining in the game. Then Joe Montana came back after sitting out much of the second half with hypothermia — treated with blankets and chicken bouillon. In the second panel Tony Belden blocks a punt and Steve Cichy runs it in for the touchdown. Montana connects with Vagas Ferguson for a two-point conversion. In the third panel, after a 61-yard drive, Montana runs into the end zone for another touchdown and follows with another two-point conversion. In the fourth panel Montana completes a pass to Kris Haines for a touchdown as time runs out. In the fifth panel Joe Unis kicks the extra point, but there’s a penalty flag against Notre Dame. In the sixth panel Unis is rekicking the extra point. By panel seven the second attempt is good.

118. The ambiguity of the characters of this cartoon was purposeful, as I thought this was a general administration policy and not meant as a slander against anyone in particular. Given the priestly blacks, the person on the right could be Father Hesburgh, Father Joyce or Father Burtchaell. Given the plaid jacket on the left, the character could be Edmund Price, Richard Roemer or Father Burtchaell.

119. Wow, young Michael going for political humor. Very dangerous for a comic strip! Meanwhile, on the sports page of The Observer was a cartoon showing a USC player claiming the No. 1 position while on his shoulder is perched a referee holding a rope that has lassoed Notre Dame and Michigan.