Inspired by a comment from my roommate, Rich Role, I developed the “Mike is Dead” series of cartoons based on the Beatles’ “Paul is Dead” rumors ten years earlier. The results were cartoons more clever than funny. My records show that they did not run sequentially and so I am not sure if this idea caught on. But somebody noticed as there was a real letter in the Observer written by Fr. Tim Hayes ’81 in response to the “rumor.” This is the first of what became an annual idea to bring the strip out of the paper into an amorphous reality through staged “real” events. If I was getting NEA funding, this would be called performance art. I just called it “goofing on people.”

276. This cartoon features number 9s on Chucks shirt pockets inspired from the White Album’s “Revolution 9” in which the phrase “number nine” played backwards sounds like “turn me on dead man.” In the last panel you see the sweatshirt of one character reveal “Bye Notre Dame.” A faux letter published the next day revealed some of the other clues. This was controversial with the Observer staff as they said this kind of fakery would undermine the paper’s integrity. I understand, but this was meant to be a harmless prank which I presumed people would get.

Dear Editor,
I think someone should raise the question as to whether Michael Molinelli is actually writing “Molarity.” I once had some person contact with Mr. Molinelli and believe there is no way he could have written some of the recent cartoons. Some have actually been almost funny.
Lately, I have been looking quite closely at some of the strips and I have found something interesting on yesterday’s cartoon. In the first panel, Chuck Mason says, “I buried Mike.” This would indicate that Michael Molinelli is dead. Look at the second panel. "If you read, “My hand’s dead, is Mike poor?” backwards it reads “Poor Mike is dead…” Plus Jim Mole (the main character with whom Mr. Molinelli has always associated himself) says “22, I am over.” If Mike had lived he would have been 22. Coincidence? I don’t think so. Who knows what other clues have slipped by us. Plus…has anyone seen Michael Molinelli on campus this year? I haven’t.
My guess is that something tragic (or fortunate, depending on your viewpoint) has happened to Mr. Molinelli. Molinelli is dead. The lapse in cartoons was probably covered up by rerunning some of his older cartoons until a replacement could be found. It is my guess that “Molarity” is presently being written by Pat Byrnes or Jim Canavan.
B. P. Goyer

The words “I buried, Paul” are supposedly heard after the song “Strawberry Fields Forever” and I was only 21 at the time but never let facts stand in the face of a good rumor. Jim Canavan did the Observer strip "Noddy.

277. In this cartoon the clues continued with the number 9s on Chuck’s overalls. In the second panel Chuck’s overalls feature a scribble that looks as much like a car crashing in flames as the yellow flowers after the “S” in Beatles on the Sergeant Pepper album cover. Panel 4 has Jim (my alter ego) as the Walrus like Paul on Magical Mystery Tour which some said was a Greek homophone for death – which it is not. The fourth panel has the desk plaque “I was” take from a photo with Paul sitting behind a desk in “Magical Mystery Tour.”

278. The cartoons were a chance for me to dump gags that otherwise would not work in my format. And the clues continue. The OPD armband on Jim is inspired by the OPD on Paul’s uniform from “Sgt Pepper” — theoretically standing for “Officially Pronounced Dead” The hand over Jim’s head in panel one is based on the cover of “Sgt. Pepper” where a hand stretched over someone’s head is a sign of death in an eastern religion – it is not. The third panel duplicates the stance of the Beatles on the back of “Sgt. Pepper” with the George — like character point to 5:00, the theoretical time of Paul/Mike’s death.

279. This cartoon features a full name shout out to Saint Mary’s student and big fan, Kim Hermann (Darr), which I did at most once a year. The clues continue in panel two with Chuck’s phrase turned backwards to say “Turn me on dead man.” Jim is holding flowers, which is a reference to Paul being handed black flowers in a photo from the “Magical Mystery Tour” booklet. In panel 3, Jim is barefoot taken from the cover of “Abbey Road.” 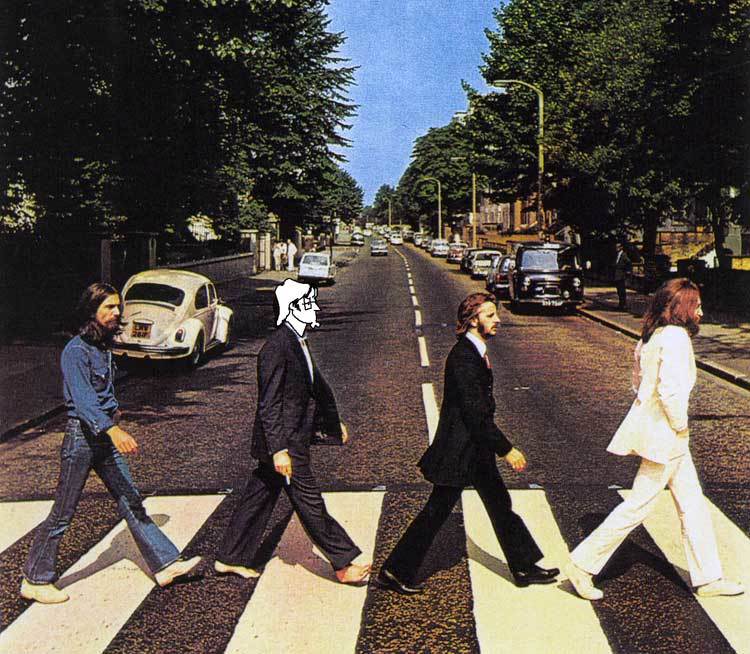 279. Addendum: I don’t have any record that the following (recreated) image or letter appeared in print but here they are. I had originally tried to get an actual photo of me crossing “Abbey Road” barefoot. On my winter break I went to the street in London and hoped to find people to help me with the picture. I found two male German students and a Korean family – none of whom spoke English. The two Germans, a son of the Korean family and I crossed the street. For my camera, I was the barefoot Paul. We switched around cameras and positions. Unfortunately, this being pre-digital there was no way to see if the picture came out until the film was developed. When it was, in back in Rome, the picture was snapped too soon and we were all out of step and looking at the car coming at us.

Dear Editor,
What’s all this about Michael Molinelli being dead? Let’s be adult about this. The whole thing is foolish. It’s stupid to think that a lot of meaningless clues and signs should lead us to believe Michael Molinelli is dead. What if in Bulgaria (or is it Yugoslavia) the walrus is a symbol of death? What makes people think O.P.D. means “officially pronounced dead” instead of “Ontario Police Department” or “only paying Democrats?” Who is really sure all those hidden number 9s mean something just because if it is recorded and played backwards it sound like “turn me on dead man?”
Frankly, if Molinelli is dead, who cares?
Lewis Fonda