You still can’t get lobster at the dining halls. All the same: Eat, be merry and pass the salad dressing. 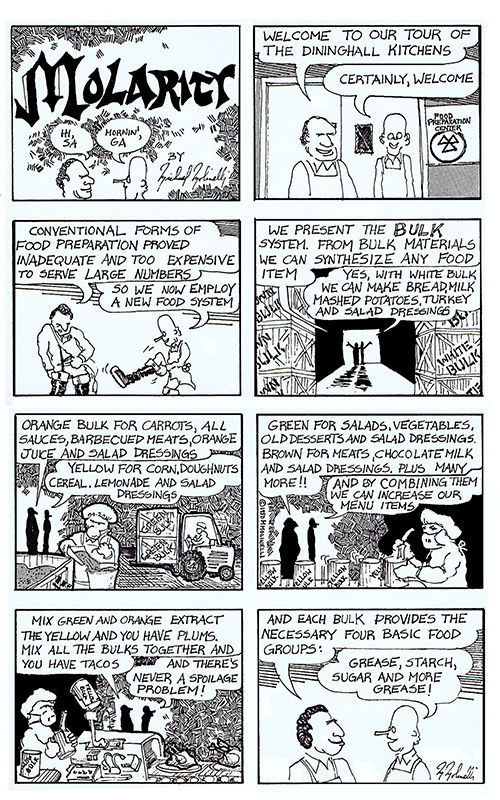 324. This was the Saturday “Sunday” comic for the Michigan game in which Harry Oliver booted the last-second 51-yard field goal. The Michigan Daily, their student newspaper, ran the headline: “Michigan 27, Notre Dame 26, God 3.”

325. The front page of the Observer the Monday after the Michigan game, ran above a story about a fire at the Grotto. Hot wax had dripped onto the boxes of extra candles that were put out for the football weekend. The flames did little damage. With victory over Michigan, it was probably worth it.

326. Molarity offered little about the parents of the main characters. So this series is a rare glimpse. The lead story in The Observer had Dean Roemer clarifying the keg policy. It had been customary for student organizations to advertise a green field pre-game kegger. Those kegs would now be confiscated, but kegs tapped at tailgaters not affiliated with student groups would not be confiscated.

327. On the sports page of the September 24, 1980, Observer, “Theismann Speaks Out” reported how the NFL needed to protect quarterbacks from being slammed to the ground. Joe Theismann’s career-ending injury occurred November 18, 1985.

328. This dark and oblique reference to one of Jim’s parents is the only one ever made in the strip. The front page of The Observer noted that Dr. Morris Pollard, a microbiology professor, had discovered that indomethacin could cure intestinal cancer in rats. Currently indomethacin is listed as a nonsteroidal anti-inflammation drug used to treat rheumatoid arthritis and a few other conditions.