Remember 1981, when Molarity predicted the implosion of an offensive, impulsive and irresponsible presidential candidate?

401. This wanton violence without consequence might offend people today. But it’s important to remember that Molarity is a cartoon. Chuck’s appeal as a character is that he can act impulsively and irresponsibly without consequence. It is the nature of the genre exemplified by Wile E. Coyote and the weekly death of Kenny in South Park.

402. A Father Griffin column, one of his weekly “Letters To A Lonely God,” recalls visiting his brother in a nursing home and a more distant memory of the day he borrowed his brother’s suit, ripped the pants and, when confronted by his now angry brother, struck him. Griff’s glimpses into his family life always sound more like a Eugene O’Neill play than a Leave it Beaver episode. 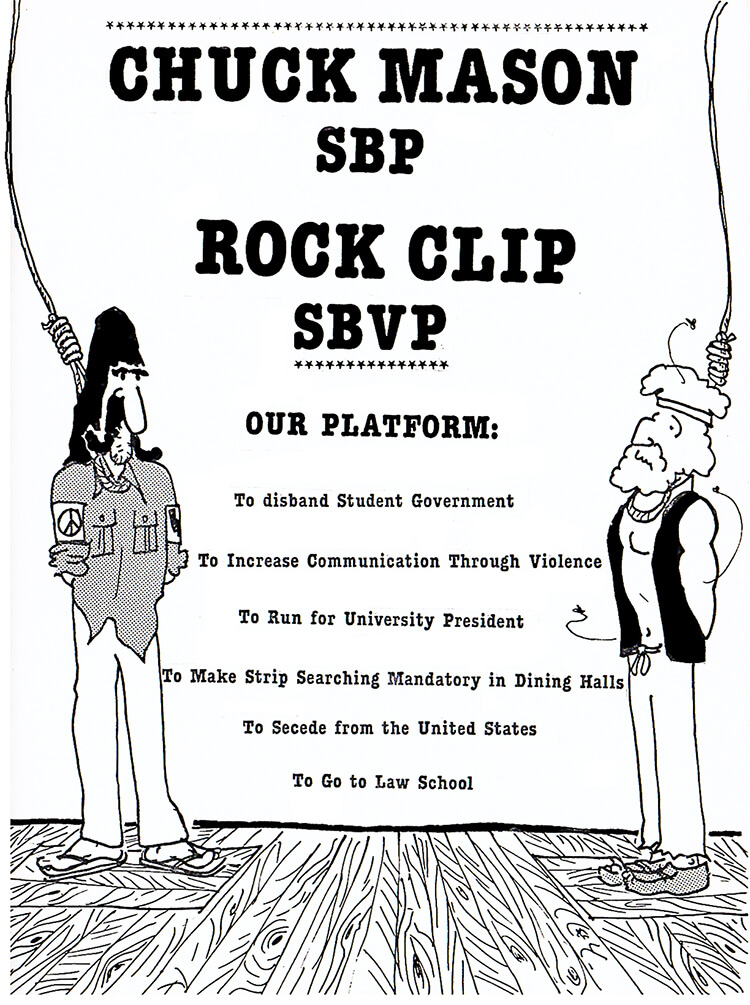 403. A few weeks after this cartoon appeared, just above the Shoe cartoon by Jeff MacNelly, my friends Steve Riese ’82 and Bob Ritger ’82 drew their annual “Simolarity” cartoon for the April 1 Absurder edition. They twisted the last panel into Chuck aiming the bazooka at Shoe, MacNelly’s purple-martin title character, proclaiming the pages were not big enough for both cartoons. I am not including their cartoons in the Notre Dame Magazine canon because their level of political incorrectness would melt down servers across North America. But they are in my new book Molarity: The Compleat Molarity available at the Notre Dame Bookstore and Amazon.com.

404. The back page of The Observer featured almost a full page heralding senior Chuck Aragon’81 becoming the first Domer to break the 4-minute mile in Champaign, Illinois, on February 28, 1981, with the time 3:59:92. Chuck would break this personal record later in his running career.

405. I have never received official word on the results of the election. I heard through the grapevine that Chuck had a fairly good showing and may even have won. But of course the election committee decided to award the office of student body president to a student who actually existed.