What we prize most here is integrity. And a high-flying tuck and flip.

450. Alphie allowed me to explore the issues of race with a character who did not conform to the standard Domer profile. I could do this more easily with the fiction of a dolphin rather than with a human character of color. First, because Alphie’s non-conformity had to be imagined I could not be accused of cultural appropriation — although no one used that term back then. Second, because Alphie was not black, any of his attributes, actions or flaws (which is the source of all comic characters) would not be read as a slander against African-Americans as a group. At this time, the campus was enthusiastic about Gerry Faust’s high-energy spirit. Articles and pictures in The Observer indicate he was very popular.

451. I continued to tell fish jokes even though I knew dolphins are mammals. I could argue the issue is one of bias against the “other,” but the truth is that fish jokes were fun. Meanwhile, an ad in The Observer announced, “The IBM Personal Computer is Here! Come to the Presentation,” which was held at the Library Auditorium. Kids, gather round me and let me tell you about DOS. . . .

452. The front page of The Observer had information on the cancellation of many events at the Stepan Center such as the “Polish Wedding” and the “Irish Wake” because many students would use such events to become intoxicated.

453. Coincidentally this cartoon appeared with a photo and a feature about the cheerleader squad looking to shift focus. Captain Shelly Obermiller and her teammates were trying to emphasize leading cheers over glamorized stunts. Strangely, no mention of Alphie anywhere in the article. Another article from the Associated Press had Chicago Cubs fans wondering if this was the year. It was not. 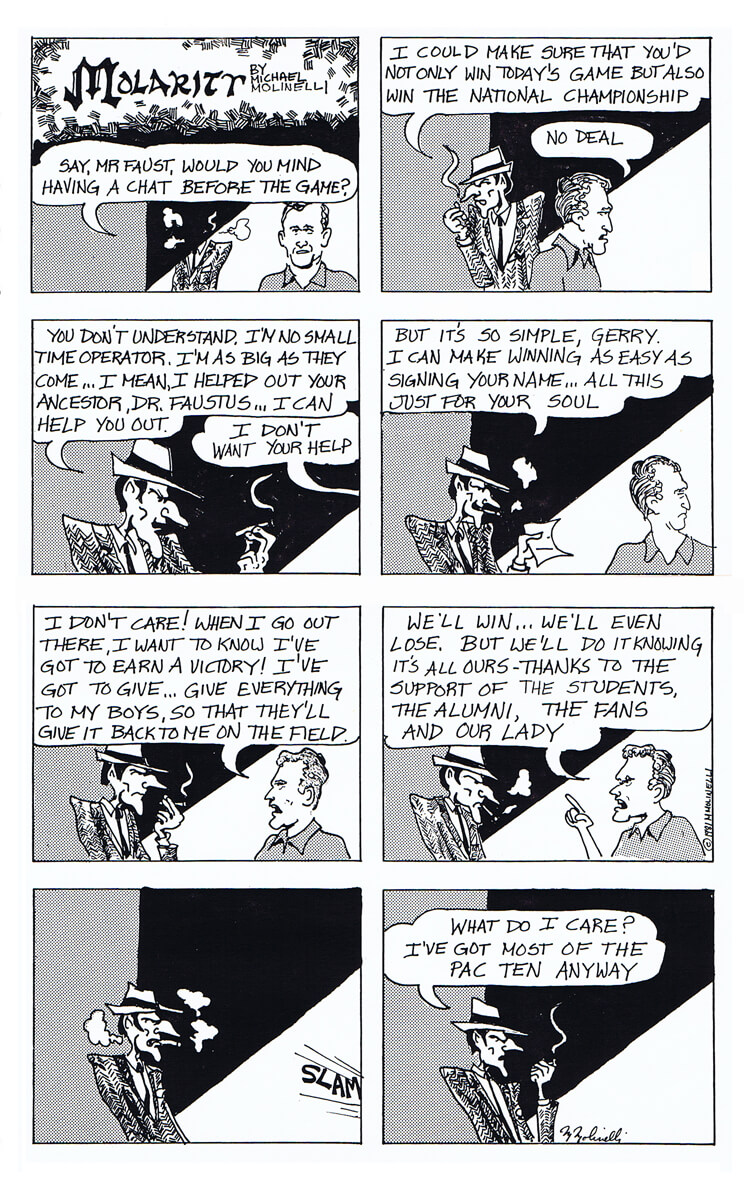 454. This was the Saturday “Sunday” cartoon that appeared on the morning of Gerry Faust’s first game at Notre Dame Stadium. Tim Koegal and Blair Kiel shared the quarterback duties. ND beat LSU 27-9. Months later, I thought about a sequel to this cartoon with Faust banging on the Gates of Hell saying he changed his mind, but I am not about kicking people when they are down. I tend to kick when they are on top.