Caution. One wrong turn and the whole semester spins out of control. 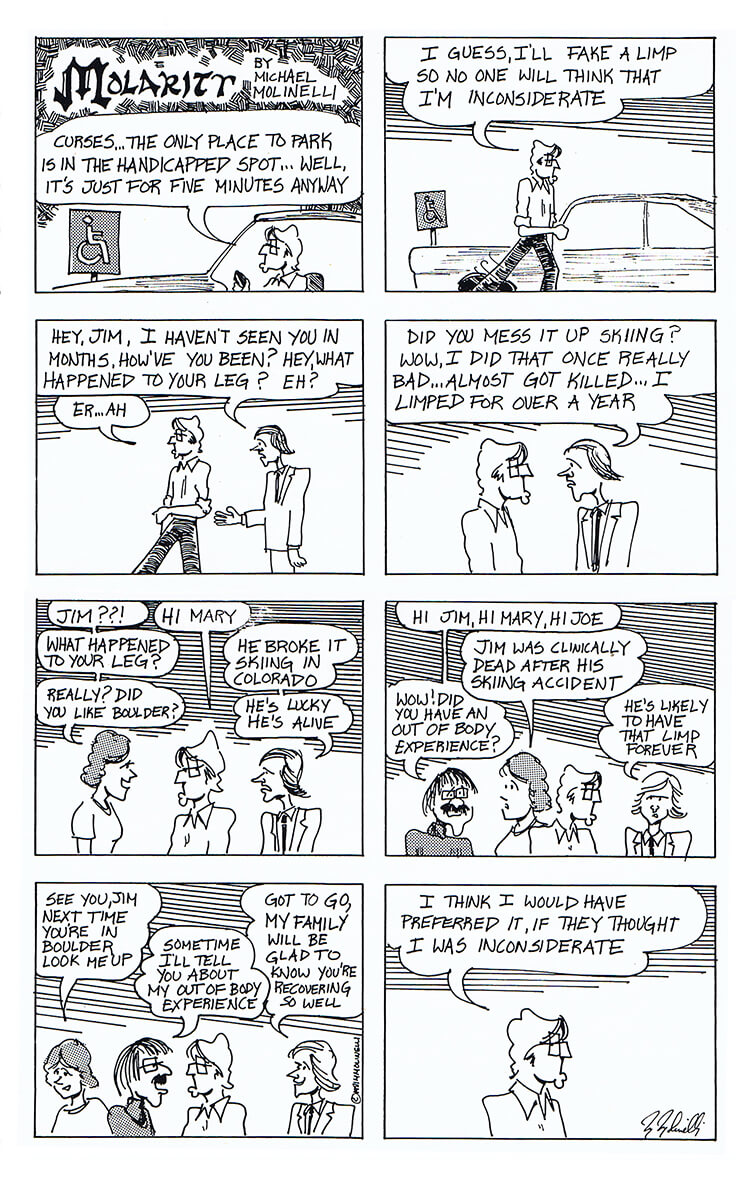 475. This was another special “Sunday” version of Molarity that appeared on a football Saturday. Blair Kiel was the starting quarterback and the 2-2 Irish were facing the Florida State Seminoles at Notre Dame Stadium. Kiel was also the punter, which allowed head coach Gerry Faust to employ the third-down punt or “quick kick” strategy to . . . well, basically it meant we didn’t think we had a chance in hell to get a first down so we would go with the one trick we could do.

476. The sports pages of The Observer were jammed with incredulity concerning the 19-13 loss to the Seminoles and the team’s losing record. It was the worst start for the Irish since 1963. Oh, and there was another assassination attack in Egypt after the October 6 killing of President Anwar Sadat and an IRA bombing in London.

477. This cartoon was homage to Professor Robert Leader’s Art Traditions. He was amused enough by the phrase “most of that stuff’s broken” to mention it in class. I took the full year of the course and Leader never mentioned that he was on scene when the Marines raised the United States flag on the Japanese island of Iwo Jima in 1945. He was not one of the flag-raisers made famous by the Associated Press photograph later memorialized in Arlington, Virginia, but rather had been brought up to the top of Mount Suribachi because he could draw and the commanding officer wanted a sketch of the terrain and the Japanese positions.

478. Anthony Walton ’82 was a featured columnist for a few years at The Observer. His column that day marked the first anniversary of the death of Father Bill Toohey, CSC, ’52, the beloved former head of campus ministry.

479. A full page advertisement in The Observer announced MCI as an alternative long distance company to the Bell Telephone System. Back then, in order to call home on the phone we had in our rooms, we first had to dial a code to get an outside line, then the ten-digit area code and number. An operator would ask you for your long distance account number. It was so expensive that it forced us to make quick phone calls. We even tried tricks like ringing home twice and hanging up, which let our parents know without incurring any charges that we had gotten to school safely.