485. This cartoon became an instant classic. Before the terrorist attacks of September 11, 2001, advertising planes often flew around the stadium and marriage proposals were not uncommon. I often wondered — with the all Marys and Patricias and Patricks and Michaels — whether any confusion ensued. Incidentally: To this day, I do not have a last name for Mitch or Cheryl. My goal is to keep it that way to the eventual end of Molarity Redux.

486. This Observer marked the student-run campus newspaper’s 15th anniversary — it launched in 1966, one week after the closing of another student publication called The Voice. Robert Anson ’67 and Stephen Feldhaus ’67were the founding co-editors.

487. This edition ran a story about my second book being published by Juniper Press, which at the time was the only student-run publishing house in the country and was part of a popular course taught by Dr. Elizabeth Christman. She had worked in publishing for decades and brought that interest and skill-set to Notre Dame. (Juniper would publish three books with a total sales of about 14,000.) Christman later told me that the press could not publish my third book since the format was so well-established and had ceased to be a learning experience for the students, so I self-published the third book. The Observer piece treated me like I was some sort of institution. I had to explain to the reporter that the “cartoonist strike” of the previous year was bogus. I wish I had known enough then to call it performance art.

488. A front-page story noted that Saint Mary’s students who had been arrested for underage drinking and then strip-searched were suing the City of South Bend. Meanwhile, at the paper’s other cartoon strip, Simon by Jeb Cashin ’83, I had become a character. I was portrayed as considering the priesthood so I could stay at Notre Dame and continue to do Molarity.

489. The Observer on November 6, 1981, was practically my paper. The front page above the masthead read simply (and inaccurately) “. . . Molinelli - page 13”; my political cartoon on the prospect of the MX missile being hauled around on interstate highways was on page 9. 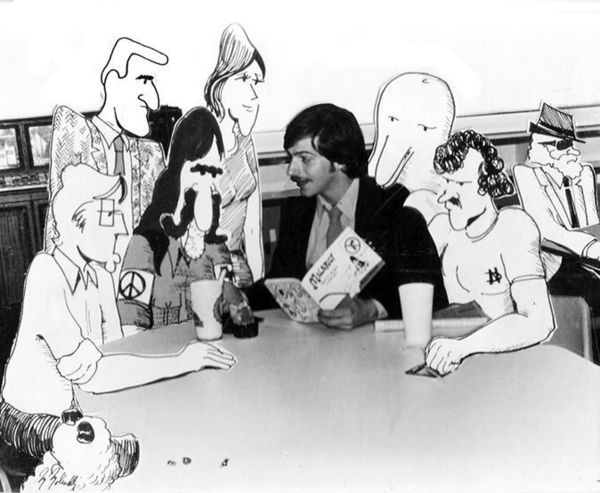 The next page featured a half-page article about me, “The Man behind ‘Molarity,’” and a Thurberesque image of me with my characters reading my second book. In Simon, Cashin had me delivering enough cartoons for the Observer to run until the year 2000, when “Mike Molinelli Jr.” would take over. And then, there was this strip. One couple who got engaged at the Grotto noted the presence of the affectionate squirrels, which somehow became their coded language for “I love you.” You do a cartoon to be funny. Sometimes you get too much information.