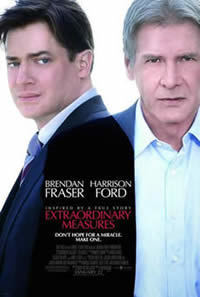 In the PG-rated movie, with the clock ticking as his children’s health deteriorates, Crowley (Fraser) reaches out to Dr. Robert Stonehill (Ford, playing a composite of several real scientists), who has the ideas but not the resources needed to develop the life-saving medication. Drawing on Crowley’s business savvy and Stonehill’s scientific genius, the two launch their own a biotech company, though the headstrong men battle each other as much as they do medical obstacles along the way.

Clearly, the more complex edges of the medical battle at home and in laboratories were smoothed over to fit the story into a Hollywood package. The narrative is structured by such familiar conventions as looming deadlines, reductive obstacles and profit-obsessed Big Pharma villains (until they’re suddenly not so bottom-lined focused, in order to set up the happy ending). However, Extraordinary Measures does admirably succeed in avoiding the saccharine tone of a clichéd Lifetime movie.

John Crowley has said that the film perfectly captures the emotional spirit of his family’s plight, and the level of humor in the film effectively balances the melodrama inherent to the tale. Credit for the film’s sincerity should also go to the lead actors’ star charisma, even if neither is at his best here. Fraser’s sizable affability effectively transmits Crowley’s devotion, though he strains to display the father’s anguish.

Ford draws productively on his beloved persona as the irascible maverick, yet he awkwardly flits between two acting modes, deadpan and raging. While the A-list stars’ presence alone raises the film’s profile above that of a television project (as does the experience of seeing it on a big screen) the film’s target audience does have to be one that appreciates the kind of entertainment implied by the trailer, as the movie lacks any edginess or cynicism.

In that sense, Extraordinary Measures is actually rare both for Hollywood films, which these days are primarily directed at teenage boys, and television, which covets the 18-34 demographic. For that, as well as for its exhibition of John Crowley’s extraordinary efforts, this film should be welcomed. While it is intended as Hollywood entertainment, it is based on a father’s very real struggles to save his children.