For Joanie Mendenhall ‘00, a career in New York City’s publishing world landed her solidly in the ranks of what she calls “a glorified secretary.” She pursued her passion for music on the side, writing and performing whenever possible. For Matt Curreri ‘99, a career in New York’s education system landed him a job as a high school algebra teacher. During his spare time, he wrote, recorded and performed music.

“I knew Matt at Notre Dame, but we weren’t good friends and weren’t playing music together,” says Mendenhall. 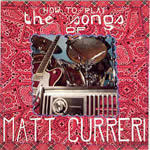 As it happened, their sisters were roommates at Dartmouth. And so Mendenhall and Curreri were informed, relatively speaking, that they had a musical soul mate in New York. The two began performing together.

Little more than a year ago, the two musicians moved to San Diego, where Mendenhall was raised. “That’s really where the music has taken off,” she says.

What’s also taken off are the duo’s appearances in the four-person rock band The Exfriends. “Matt came up with the name,” says Mendenhall. “In New York, people were always moving in and out. You make these great friends and inevitably someone always moves away.”

The two write songs played by the indie group, which is fronted by vocalists Curreri, who plays guitar and sometimes drums, and Mendenhall, who plays guitar, Rhodes electric piano and sometimes the accordion. An upright-bass player and violinist complete the group. San Diego media have been effusive in their praise of the “delightfully disheveled” band and its two lead songwriters.

On a recent trip, the Exfriends performed in Virginia, where Curreri grew up, in Washington, D.C., and in Chicago. They plan to do a show in South Bend and hope to release a CD this year.

Both Mendenhall and Curreri recently came out with solo debut albums. Mendenhall’s is appropriately named Secretary Waltz; it was released by Spinster. City Salvage Records has released How to Play the Songs of Matt Curreri.

More information on the two rock ‘n’ rollers, including show dates for The Exfriends and sound clips from their individual CD s, is available at their websites: www.joaniemen.com or www.mattcurreri.com.