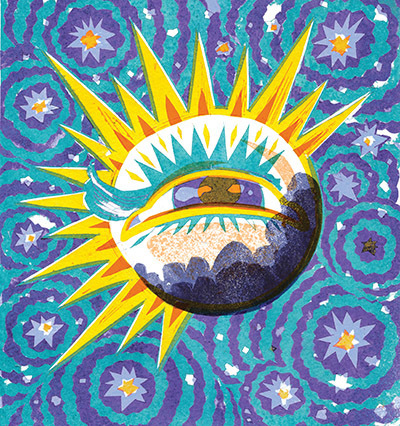 It may well be that the eyes are the last of ourselves to know of love, which, at its heart, is a holy recognition. But to be loved is, at its heart, to be wholly seen.

If our eyes are the last to know love, they make up for it quickly, orienting their owners in a world that whirls in inky darkness and that orbits blinding light. If we’re lucky, our eyes are guided for a time by our parents, whose own eyes let us see ourselves as we’re seen by those who love us and that give us windows into the complex depths of older souls; and whose eyes sometimes sing with joy when we connect with an 0-2 fastball in the bottom of the inning or approach the outcast at a dance in the junior high gym; and that, other times, stare in disbelief when we let an uncapped pen generously share its ink with the living room rug or leave the hamster cage unlatched and now the furry thing is nowhere to be found. Our parents’ eyes are steady and watchful and keen, and if they are the fixed stars by which the progress of our little wandering barks is measured, what are we to do when they dim?

Macular degeneration is a grim Latinate phrase, and when my mother said it one morning over coffee there was a catch in her voice and her eyes went temporarily blind with tears.

The macula is, anatomically speaking, a freckle on the retina, no bigger than the “o” in this sentence. In photos, it looks like a sunspot on a surface of a cooling star. Its task in the translation of light to sight is generative: Light rays, refracted by the cornea, pass through the pupil and are focused by the lens onto the retina, a thin tissue layer whose role in rendering sight is that of film in a camera. In the middle of the retina lies the macula, responsible for central vision and composed almost entirely of “cones,” photoreceptors responsible for color, daytime vision and sharpness of sight. Cones, along with “rods” (for peripheral and nighttime vision), are the twin magicians of the macula, converting photons, the elementary quanta of light, into electrical impulses that pass through the optic nerve and then onward to the brain, which assembles the impulses into what we call vision. To understand the operation of the eye — how it transforms objective, physical phenomena into something corporal, personal, seen — is to spy on the mechanism of a miracle.

With time, however, all bodies, those earthbound and otherwise, fade, degenerate and decay. Beneath the retina, cellular debris, which normally floats freely behind the eyes like interstellar dust, can accumulate and clot, causing the macula to atrophy and scar. Symptomatically, the scarring manifests itself in myriad and intrusive ways: blurred sight, a fading of color, distortion and blank spots in the center of the visual field — and, more intimately, difficulty with reading, an inability to see and recognize faces.

There is no cure for macular degeneration, my mother told me, which a feverish spate of research later confirmed. Doctors recommend nutritional supplements and eye exams, and therapists counsel patience and adjustment. And poets, if they are to be trusted with such matters, offer a range of remedies, from rage against the dying of the light (Dylan Thomas) to being still, and letting the dark come upon you, which shall be the darkness of God (T.S. Eliot). Oh dark dark dark, Eliot wrote. They all go into the dark.

What little I know of darkness, inadequate and anecdotal, is this: When I was young and first learned I was colorblind and could not see the full spectrum of visible light, I felt cheated. There’s so much color in this world, so much light, that to decry the denial of just a little seems churlish and ungrateful. And I am grateful; I am more than grateful. But even so, we are made to love the light and do love the light and what does it say of a place that permits its colors to fade and its light to dim? What to make of a world that allows both the miracle of the macula and the dread of its degeneration? Can we feel anything other than paralyzing ambivalence in response to the world’s blind incoherence — that this vale is petty and profound, abides cruelty with kindness, is dark and yet full of light? There are things in this world I still want my mother to see.

When I close my eyes and think of my mother, I see her in color. I see her making the Eye love you sign (pointing to her eye, then her heart, then to me), which she’d make to each of us when she dropped us off at school; I’m sure it took every ounce of motherly gumption to keep driving when I’d tearfully chase after her making the Eye love you sign in return. I hear her singing Motown in the car, feel the brush of her “smart kisses” on our foreheads on days we had tests and see her notes written on napkins that appeared in our lunch bags — “this too will pass” one says, which I saved and still have in a box of precious things. I see her scratching the dog’s back in just the right place, making him go all doe-eyed and adorably limp, and think of how she and my father had to carry his limp body out to the car when he had a stroke and had to be put down. I remember how she’d fast with my little sister on the nights before her surgeries, how she laughed and laughed when the two of us danced at my cousin Matthew’s wedding, or how, the morning after I wrecked the car, she looked at me with what I knew was anguish. Or how, after the last game of that last season, she was waiting for me outside the dugout. And I was sure she wasn’t going to come since I had been caught lying to her the week before, a reckless sin that would presage a long, woeful torrent of fury and ache, and it was an away game besides, more than 80 miles outside the city, and the girls had school the next day, but there she was all the same, with my father there next to her, the two of them standing, waiting for me under the dimming park lights, and Dad’s got his arm pulled tightly around Mom, his furrowed eyes darkening with kindness and grace, and Mom’s little half-moons beam out at me from the dark, I love you, they say, I forgive you. Come home.

It’s quite a sight.

C.P. Barnes is the pen name of an attorney living in Houston.