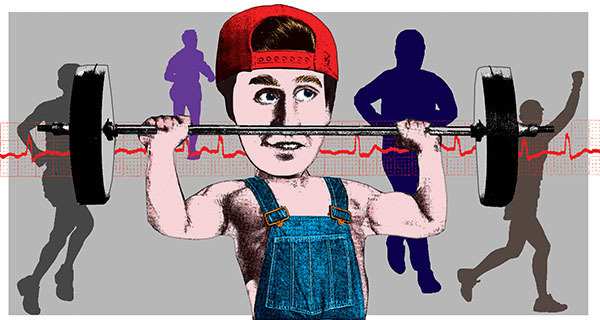 There is romance in running. Eyes ahead, arms relaxed, feet padding rhythmically as the miles fall away and the runner and the muse become one.

My shoulders cinch together. My legs lack any semblance of grace. My arms bundle forward, as if I’m trying to shield my guts from inevitable side stitches.

Not that it stopped me from trying, of course. The habit started in high school when I joined the cross-country team. My teammates were 20 pounds lighter than I was, with springbok legs and capacious lungs, so I switched to sprinting after about a week. But hey, I stuck it out for four years — and anyway that’s what you do when you’re a runner, isn’t it? You grit your teeth through soul-draining workouts, and you gut through competitions, and you trust that running is the end-all-be-all of any human athletic aspiration.

So when I moved to a new apartment in Brooklyn a few years ago, I brought my running devotion. Prospect Park, Brooklyn’s bucolic answer to Central Park, is a 10-minute, tree-shaded jog from my door — and anyway that’s what you do when it’s 75 and sunny, isn’t it? You put on your perfectly calibrated training shoes, and you press a button on your watch like the elegant gazelle-people starting marathons on TV, and you trot buoyantly down the path by the lake.

Any athletic endeavor is fundamentally an article of faith. Lace up the trainers, apply the spandex, go sweat: It’s a testament that we control our lives and that we exert control by exerting ourselves. Otherwise why wake up before dawn to run a marathon in a rainstorm? Why lift weights to the point of fainting?

I’m 27. And while my life likely isn’t the norm for most 27-year-old Americans, I’ll bet that my generation is acutely aware of an ever-greater pressure to succeed, to make the most of what we have — at work, with our friends, on Instagram. We grew up bridled with astronomical promise in an era when the only certainty is uncertainty, and maybe debt, and probably also melting polar icecaps.

Promise and success demand control. While the pressure to succeed is acute in New York City, where prodigious success is more or less the city’s founding purpose, it’s palpable in any other make-it-there mecca of American striving: Hollywood, Silicon Valley, Washington, D.C., Notre Dame. So of course we feel an obligation to take care of ourselves. Of course we’re compelled to make smart decisions, to hold on tight to what we can. And exercising is another way to do that.

Whether you’re deciding on a career path or a calorie-burner, it’s surprisingly easy to just do what everyone else is doing or what everyone else seems to call a smart bet. And anyway that’s what you do when people ask what you’re doing with your life, isn’t it? You pore over The Wall Street Journal charts, you calibrate your career options, you network, and you pick a path — more school, more work, more of both — that seems like a pretty solid way to not go broke. And you go running. Because where I’m from, that’s just what people do.

If there’s a risk to this process — and there may not be, as legions of professionally well-adjusted runners will insist — it’s becoming so unmoored in the pursuit of an optimal plan that you simply forget why you started doing it in the first place. When that happens, it’s hard to shake the gnawing sense that maybe there’s something else out there, something new, something for me.

I probably would have adhered to my cardio habit, churning out the miles on my ham-hock legs, until a series of coincidences changed my running career — and, I guess, me.

First, I joined a local CrossFit gym. (Go ahead, roll your eyes.) There I met a strength coach named Sean, whom I call Sean of the Beard. (His facial hair, styled somewhere between sea-captain and archdruid, would drive Albus Dumbledore to existential crisis.) Sean of the Beard was a fine CrossFit coach, but his true love was powerlifting, which he not-so-subtly encouraged me to pursue alongside CrossFit.

Not to be confused with bodybuilding (a pursuit of aesthetics) or weightlifting (which you’ve probably watched during the Olympics), powerlifting is a gloriously straightforward sport of pure, unabashed lift-until-your-neck-veins-turn-purple strength. Powerlifting’s three lifts — bench press, squat and deadlift — each essentially involve picking up a barbell and setting down a barbell. That’s it. If the runner’s god is Hermes, with his sculpted calf muscles and rippling abs, then powerlifters get Hephaestus — slab-built, forge-bound and a few months of P90X away from an enviable physique.

Powerlifting is not particularly popular, at least not where I grew up, and certainly not compared to running. Unless you’re from a small village in Bulgaria or Ohio, your powerlifting experience is probably limited to that time your buddy Craig asked you for help moving his couch out of his third-floor apartment, only to realize after you’d arrived that it wouldn’t fit in the elevator.

Under Sean of the Beard’s guidance, though, I developed a curious appreciation for powerlifting. Tuck in your elbows, he’d say. Drop your hips. Lead with your chest, and that’s the one I always remember, because it’s like saying lead with your heart.

Deadlift after deadlift, the body that once doomed me to long-distance mediocrity started working in my favor. My tree-trunk legs, so limited in stride, were ideal for muscling weight off the ground. My wide shoulders easily braced a steel barbell. And instead of getting my endorphin rush from mileage, I got it from pulling 350 pounds off a platform, creating a blood rush so fierce that it blurred my vision and distorted my hearing, so Grandmaster Flash sounded like he was rapping through a Playskool Mr. Mike.

Then, a few months into my CrossFit/powerlifting experiment, I was playing basketball — I’m even worse at basketball than I am at running, by the way — when a portly guy with a bad haircut and a Bond villain accent crash-landed on my right knee, bending it in a direction knees shouldn’t bend. Tibial collateral ligament, medial meniscus, tibial plateau: trashed, and with them my hopes of trundling through Prospect Park that summer. I resigned myself to limping around the CrossFit gym, Hephaestus doing lame-duck pushups, as everyone else trotted by looking sweat-glazed and sprightly.

The experiment was over.

Then I met Ronit, my delightfully droll Lithuanian physical therapist. She was positively buoyant, at least by the standards of Lithuanian physical therapists. Ronit was also something of a powerlifter herself, and after a few months of repairing my knee to even marginally working order, she sensed that I, stubborn and masochistic, needed a way to kick my own ass again. This came to its logical conclusion one day during knee therapy, as Ronit kneaded through scar tissue with an implement resembling a metallic velociraptor claw, and I mostly tried not to curse out loud and/or weep openly from the pain.

“Do you want to try deadlifts?” she asked.

If hadn’t been too busy putting on a brave face in front of the other patients — mostly wizened Haitian ladies absentmindedly pedaling stationary bikes — I would have hugged her. I mustered a nod.

“Just don’t go too heavy at first, okay?” she said, knowing full well I probably would. (I did.)

Just as my knee was finally sturdy enough for a diet of deadlifts, Sean of the Beard decided to open a stand-alone powerlifting and weightlifting gym next to CrossFit. It had once been a refrigerated truck depot, and the renovation had been sparse: No mirrors, at least four colors of paint peeling off the brick walls, nary a whiff of air conditioning. An aesthetically minded friend once described the new barbell club as “prison-ey.” I think he meant it affectionately.

I signed up. What did I have to lose?

I probably didn’t realize it before physical therapy, but I’m not sure I would have kept at those deadlifts if I’d had another option. Powerlifting was grueling but rewarding, social but intensely mental — a stand-in for those runs around the park — but not something I’d ever envisioned myself doing until I’d tried it.

As I’ve become a powerlifter, I noticed that right before anyone attempts a heavy lift, everyone else in the gym goes quiet. One by one, the lifters will set aside their barbells and plates, and fix their vision on the one person, one athlete, who is about to push themselves to their absolute limit. On my try, as my chalked hands close over the rough knurling and as my dusty Converses press into the sweat-stained platform, the gym explodes: bursts of PUUULL and MOVE THAT WEIGHT and, as my legs quake under strain, LEAD WITH YOUR CHEST.

I don’t run much anymore, except my daily 10-yard subway dash. My knee is still disconcertingly bendy, and running doesn’t help. But even if I could run normally, I’m not sure I would. And while I’ll never be a superstar powerlifter, I’ve found a new pursuit, one that resonates in a way running never did.

And anyway that’s what it takes to find your own way, isn’t it? You climb a raw and wild path, and you find people to guide you through it, and you learn old scar tissue has started to heal, and you discover that your body feels purposeful again. And you lead with your chest, which is really just another way of saying lead with your heart.

Michael Rodio is the senior digital editor at Men's Fitness and a former intern at this magazine. He is originally from New Jersey.