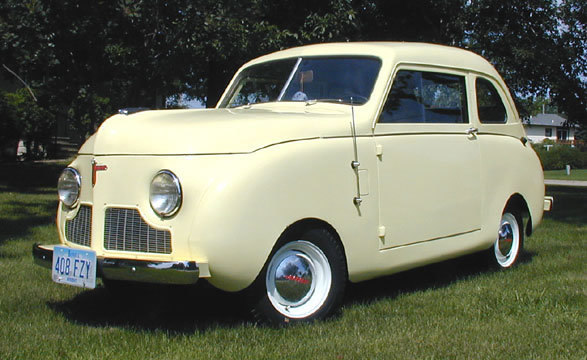 Not even mentioned was my very first car: the Crosley. What a disappointment — for me, for Frank Lloyd Wright, if only he were alive, and for all who are left of the 70,000 or so people who innocently bought Crosleys in their heyday, the brief span from 1946 to 1952.

This car was the brainchild of Cincinnati’s Powel Crosley Jr., the man who in the 1920s made radios so inexpensive he became known as “the Henry Ford of radio.” He also built the first car radio, owned Cincinnati’s Station WLW (in its day the world’s most powerful radio station) and the Cincinnati Reds baseball club (in 1935, he made sure they played the first night game), and created the Crosley Shelvador (the first refrigerator with shelves in its door).

Long before the Volkswagen Beetle arrived here, Crosley was determined to give post-World-War-II America what he was sure we needed: a cheap small car. Shorter and narrower than the VW, his Crosley tracked only 40 inches between its 12-inch diameter wheels. The car was an improvement on his smaller prewar Bantam, a two-cylinder, 13.5-horsepower job without universal joints but with a hand-powered windshield wiper.

My bright-yellow two-door Crosley convertible seated four. It cost less than $800 and got its promised 50 miles per gallon. The canvas roof was held on by four snap-buttons front and rear and supported by a couple of flimsy metal racks that sat in the edges of the car’s walls, which rose to roof height. The windows didn’t roll up and down, they slid back and forth.

I bought my Crosley in June 1947 while working in New Brunswick, New Jersey, as a radio announcer. I soon found it helped my work, which included a street-interview program that asked passers-by their opinions on current topics. The Crosley never failed to attract the curious, whom I trapped into talking to my wire recorder, the precursor of the tape recorder.

July brought a vacation. I headed my Crosley for my hometown in western New York, up through the Delaware Water Gap and Binghamton and Ithaca. Surprise! The Crosley, used to central New Jersey’s flatlands, didn’t like climbing those long hills of the Poconos and New York’s southern tier. It could race along at 55 or 60 mph on the level, then drop right down to 18 or 20 on inclines that ran several miles uphill.

I reported this to my Crosley dealer. A mechanic showed me how to adjust the tiny needle valve for a richer mixture in the carburetor. Good idea, he said, if you’re where there’s lots of hills. He also noticed the engine didn’t sound quite right, and took off its cover. Yup — a cracked valve. But it was Friday, and the expert on valve jobs wasn’t there. He was busy writing his sermon for Sunday — he was a Presbyterian minister who had somehow become a Crosley buff and worked for the dealer on special assignments. The next week, for $23, he replaced the valve, proudly telling me how he could single-handedly lift out the lightweight four-cylinder COBRA engine (named for its copper-brass alloy). The car had under 3,000 miles on it.

I met Jean Bramwell, the girl I was destined to marry. Once, while visiting my brother at his school in Connecticut, we three sat chatting after dark in the car. Without warning, his schoolmates picked up the Crosley. I said, “Keep calm,” resisting the temptation to start the engine and put the car in gear in midair. They turned us 90 degrees and set us down.

My fiancee, my two brothers (one is 6 foot 5, and I’m 6-2½ myself), and I once were parked in front of Manhattan’s Museum of Modern Art. Pedestrians stopped, gawking as we four un-jackknifed out of the Crosley. “We thought you were a circus act,” said one. “Is it going into the museum?” asked another.

I moved to Buffalo, New York, and a regional radio station. The engine began producing the same kind of knocking the Presbyterian minister had cured. I found the nearest Crosley dealer in North Tonawanda. Another valve job, this one at fewer than 7,000 miles.

The Crosley had been mine for a year when I drove to New Jersey to pick up my fiancee, thence to Connecticut for my brother’s graduation. On the way, something beneath the gear box began a grinding growl. Next day, after the ceremony, I dropped Jean off in Peekskill, New York, for her train ride back to New Jersey, then headed up the Hudson and west along the Cherry Valley route (no Interstates then, remember) toward Buffalo. As the grinding increased, my speed decreased. At a maximum 30 mph, I plodded 375 miles across New York state through the night and into the dawn.

The diagnosis in North Tonawanda? My Crosley had burned out its universal joint and drive shaft. I gave the dealer my strong opinion. “Listen,” he said, “did I sell you that car?”

“No,” I said. “But I wrote a letter and a half to Powel Crosley after the valve job, and I got back a form letter saying to see my authorized dealer, and that’s who you are.” I bought a universal joint and drive shaft and wrote Powel Crosley another letter, telling him lemons were yellow and so was my Crosley. The Crosley company sent me $38.

Jean and I were married that September in New Jersey. After honeymooning in New York City and before we headed uphill into the Poconos, I adjusted the needle valve for a richer mixture. Somewhere west of Stroudsburg, Pennsylvania, as we rode a curving two-lane highway up a mountainside, the Crosley coughed. It slowed and coughed again. I pulled onto the shoulder as it died.

Out of gas? No. I raised the hood and looked first at the carburetor, then told Jean I’d return in a minute. I hurried back down the highway to about where the Crosley first coughed. The 18-wheelers zoomed by as I studied the pavement. There it was — just on the edge of the concrete — a tiny T-shape an inch long, threaded at one end, its cross-bar maybe half an inch. I picked up the needle valve, screwed it back into the carburetor, and we drove to Buffalo.

Winter brought foot-deep snow. No problem once I put old-fashioned chains on the bright red Crosley wheels. But the Buffalo wind drove snowstorms under the edges of the canvas roof. A convertible-roof specialist drilled into the narrow wooden frame that topped the walls and installed four snap buttons on each side — as Cincinnati should have done on the assembly line.

By now, the 20th century was at mid-point. In Wisconsin, world-famed architect Frank Lloyd Wright, who knew a thing or two about design and who had dreamed of building for the common man in his Usonia community, liked Powel Crosley’s idea of tiny, cheap runabout cars. Obviously, he had not heard about the Crosley needle valve or its drive shaft, universal joint or cracked valves. In 10 minutes at a Madison Crosley dealer, Wright bought a half-dozen — all bright red — for the use of students at his architecture school, Taliesin Fellowship. For the next three or four years, the Wright Crosleys caravanned back and forth between Wisconsin in the summer and Scottsdale, Arizona, where Taliesin West was flourishing, in the winter. The students, young, eager and idealistic, apparently put up with the vagaries and cranky behavior of the Crosleys. Word got around Madison that the mechanics who benefitted from the cars’ steady need of repairs regularly placed tires beside them, then tipped them on their sides to get at the underparts.

Meantime, the Siberian western New York winter gave my Crosley its finest moment. Under the noontime sun in a cloudless sky at about 5 above zero, my bride and I were driving east toward Rochester. We had just passed through Batavia and were zooming along between high banks of dazzling plowed snow. Suddenly the Crosley shuddered and shook. I pulled over and looked under the hood. Idling, the little engine was bouncing around like a basketball in a too-big box. I stepped back to the door, turned off the engine, ducked under the hood again. A streak of light caught my eye. I looked up at the hood’s underside, seeing sky through a gash 4 inches long and a half inch wide. The metal bent outward. I looked back at the engine. The culprit? The fan, normally four-bladed, now had three blades.

We shuddered our way back to a gas station. “Is there a Crosley dealer in this town?” I asked.

“Yeah, turn right at the next corner, then he’s on the left. Can’t miss it.”

The dealership was announced by a small sign hanging from a bracket on a tree in front of a house. Down a long driveway, we found a barn embellished with signs for Pennzoil, Coca-Cola and Crosley. “You got a fan for that car?” I asked the proprietor, a pipe-smoker in greasy overalls who needed a shave.

“Git you one from Cincinnati in about two weeks,” he replied.

He took the fan off the engine, cut off one blade, and reinstalled it. As the COBRA purred like its old self, the Crosley dealer asked, “Like your Crosley?”

The Crosley ran fine from then on. It was going strong three months later when we traded it for a used Chevy.

Bernard Ryan Jr. has written, co-written and ghost-written more than 30 books. His Tyler’s Titanic, the story of a boy who finds a way to visit the great wreck, and his biography, The Wright Brothers: Inventors of the Airplane, were published in 2003. He lives in Southbury, Connecticut.