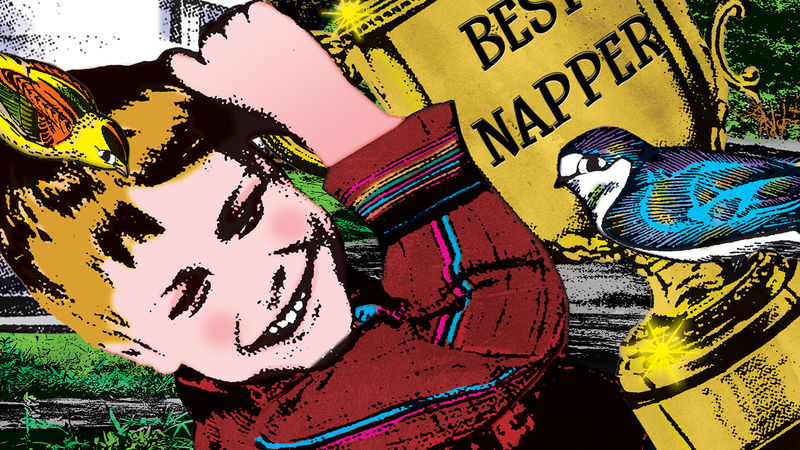 On my second day of kindergarten, at a school named for a species of tree, I discovered that our teacher, Miss Appleby, presented a Best Napper Award every week, and that the child who earned the most weekly napping awards was then presented with the Best Napper of the Year Award in June, on the last day of school, in assembly, before the entire school, which went from kindergarten to sixth grade, and contained some two hundred students, none of whom, I determined immediately, would outnap me.

I report with admirable modesty that I won the first week’s Best Napper Award, defeating Michael A., who slept like a rock but flung his feet and fists as he slept (he had six brothers at home). I also won Week Two, in a landslide, but a small, moist boy named Brian F. beat me in Week Three, and the battle was joined.

We were all small, relatively — I mean, this was kindergarten — but Brian F. was especially small; my older brother Kevin, who came to get me one day after school and got a close look at Brian F., said he looked like a wizened gopher — and I felt his size gave him an advantage, in that he could drop down faster to his napping mat and was less likely to be kicked or jostled than someone, say, my size. I appealed to Miss Appleby, on the advice of my older brother Kevin, who said I should ask for a point system or a staggered start or something like that, but she ruled that Brian F. did not have significant or substantive advantage, and we went on to Week Four.

It is interesting to note here, by the way, that the girls in our class were terrible nappers; I think a girl won the award only three times in 30 weeks, and one of those awards was tainted, I felt, as both Brian F. and I were out sick that week. The winner that week was Margaret O’S., who couldn’t nap if you gave her a cot and a pillow and a quart of gin. My brother Kevin advised me to appeal the award that week, but our dad said no, using the word litigiousness, which I had never heard before.

Mostly it was Brian F. and me trading awards all through the fall and into winter, although I remember a boy named Michael C. stole the last one before Christmas by egregiously faking his nap, as another boy proved by kicking Michael C. in the ribs, but Miss Appleby did not notice, or pretended not to notice; the fact is that Miss Appleby was a sly woman and often pretended not to notice things that no person with eyes and ears could fail to notice, like Margaret O’S. being a simpering, devious sycophant who sucked up to Miss Appleby in the most shocking fashion so as to win Helper of the Week Award and gold stars for her drawings of cats and the New York Yankees and the other works of Satan. My brother Kevin just last year told me that he saw a newspaper item on Margaret O’S. from which the word probation leapt out at him, to no one’s surprise.

During the Christmas break I worked hard on napping, and when school started again in January I went on a tear that I think even now must be the record, or close to the record, for consecutive napping awards at Birch School. I swept, or slept, right through February before Brian F. recovered his equilibrium and went on a little run of his own, and we opened April tied at seven awards each. With 12 weeks left in the season we were alone at the top, a situation which perhaps rattled us both, as neither of us won the award that month, losing to, in order, Marisa P., who had a cold and was heavily drugged by her mother; Michael A., whose brothers were away at a grandmother’s funeral or something, leaving him home alone with his dad; a girl named Gail N., who came out of nowhere that week, like one of those rock bands that makes one unbelievably great song and then never makes a memorable song ever again, like Question Mark and The Mysterians; and a girl named Colleen H., who later became a nun in a religious order that worshipped bundles of sticks shaped like canoes, according to my brother Kevin, a scholar of these things.

I won the first two weeks of May, Brian F. won the last two weeks in nail-biters (by now there was betting among the boys, although none of us had any money and we had to bet cookies from our lunches), and with three weeks to go we were again tied. By now even Miss Appleby was caught up in the competition, and as June opened she announced that while all of us could and should take advantage of Nap Time, she would set aside a corner of the classroom for Brian F. and me to go head to head, as it were — best two of three, for the title.

June that year was powerfully hot and sticky, and I remember that we could smell some sort of foul algae stench from a pond nearby, and that was one of the summers of the 13-year cicada (called, no kidding, Magicicada), and the man who mowed the acres of grass around the school went into a manic phase and mowed all day every day, so it was harder than usual to drop off thoroughly when Miss Appleby gave the signal; plus there were the murmurs and burbles of the other kids, and the faint sound of betting, and the sickly wheedle of Margaret O’S. sucking up to Miss Appleby, and the weird feeling of being within a few inches of Brian F., who was so moist that he sweated aloud and emitted a cloud of humidity so dense that it was a wonder he was not covered with moss and lichen and small ferns.

But if the good sweet Lord ever gave me a gift, it is the ability to nap at the drop of a hat and to sleep soundly until roused by gentle mom or loving bride, or by a brother with a fist like the knob of a shillelagh, or by a large dog with truly horrifying breath from recently eating a mole, and I report, again with admirable modesty, that I napped Brian F. into the ground over the last three weeks of the season, and I won the Best Napper Award for June and for the Year, and stood before the entire school assembly on the last day of school, in the gym, with the older kids laughing their heads off at me for reasons I did not understand then and spurn happily now. In my view, setting high standards for yourself is a good thing, and working toward your goal with all your might is a good thing, and how many people can say that they won the Best Napper Award not for a week, like that smarmy, insipid Margaret O’S., or two, like poor, twitchy Michael A., but for a whole year? Not so many, I say, with enviable modesty. Not so many.

Brian Doyle is the editor of Portland Magazine at the University of Portland and the author of The Thorny Grace of It: And Other Essays for Imperfect Catholics.