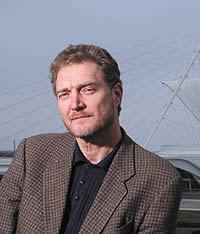 Speaking at an event sponsored by this year’s Notre Dame Forum, a year-long discusson of the global marketplace and the common good, the president and CEO of the Congress for New Urbanism illustrated his point by comparing the post-World War II fates of Dresden and Detroit.

Suffering defeat, the German city smoldered as a wasteland of rubble, its buildings crumbled to their foundations, hardly recognizable as a once-flourishing traditional city, Norquist said. In contrast, Detroit, after the war, stood poised to prosper. Streetcars ran up and down well-defined avenues lined with shops, restaurants, offices and theaters, all within walking distance for most of the city’s residents. The streets of Detroit not only facilitated movement of people and goods, they served as primary public gathering spaces for social exchange and commercial activity.

Fast forward to today’s reversal of fortunes. Norquist noted Dresden has been rebuilt; its traditional buildings again define public spaces attuned to the human scale. Residents once again stroll amid the colorful facades of traditional buildings housing apartments above shops and cafes, with little visible memory of the scars of war. In sharp contrast, many of Detroit’s once lively streets and buildings have been razed to make room for a vast and barren landscape of widened highways and crisscrossing overpasses.

The former Milwaukee mayor said Detroit’s self-inflicted wounds conjure images of defeat rather than victory and serve as a sober warning that bad public policy and mis-regulation potentially are more destructive than war.

Norquist underscored the need for changes in American urban policy. Even more important, he emphasized the positive aspects of existing cities which contribute to the common good, that of the various social, economic and environmental benefits cities provide. He called these benefits “blessings.” Among the most important of these collective goods are the public streets and squares as forums for civic exchange, and pedestrian-friendly neighborhoods that provide residents of all ages and incomes access to a mix of uses (schools, stores, offices, churches, etc.) all within a comfortable walking distance.

“Cities are good,” Norquist said, “not pathological.” Within the last century, he said, politicians have been erroneously categorizing cities as dysfunctional places that require subsidized funding and specialized solutions to fix their problems. Norquist challenged his audience to think of cities as positive and complex environments, places where solutions must come from thinking about other people and the collective goods that cities provide.

Norquist said narrow thinking and the separation of decisions under the control of isolated specialties overlook a city’s complexity and lead to destructive consequences. Citing his fight against a proposed Milwaukee freeway that launched his political career, Norquist said various existing, specialized governmental regulations treat streets solely as traffic conveyors. Consequently, decisions about streets are left in the hands of traffic engineers, devoting vast resources to ever-expanding highways and expressways in a single-minded quest to eliminate congestion.

This narrow focus, the former Milwaukee mayor said, damages the common good of cities by isolating commercial activity from pedestrians, depressing real estate values adjacent to these highways, and dividing neighborhoods from one another.

Norquist pointed out that some types of traffic congestion actually are good. For example, high pedestrian activity, or “pedestrian congestion,” is necessary for a healthy street life to support commercial activity. A traditional network of small, connected streets provides this pedestrian-friendly, commercially vibrant environment while at the same time moves traffic more efficiently by dispersing it along multiple routes. He contrasted Connecticut Avenue in Washington, D.C., a traditional mixed-use street that carries traffic at the steady pace of 8 to 13 miles per hour during peak traffic periods, with the D.C.’s Potomac Freeway, which carries traffic at a meager 2 to 6 miles per hour during peak traffic periods. Norquist argued that attacking the traffic congestion problem by merely building highways has not only failed to resolve the issue but has destroyed many other common goods of public street life.

Thanks to individuals like John Norquist and associations such as the Congress for New Urbanism, many communities have once again realized the benefits of traditional urbanism. In fact, public policy has begun to change and people have begun to plan cities and neighborhoods using these time-tested traditional principles.

In the same way that modernist planning failed to sustain the common goods that traditional urbanism has always provided, one cannot help but question whether or not modernist architecture similarly falls short. Would Dresden be as lively and desirable today if it had been rebuilt devoid of the traditional architectural forms and the robust construction that give — and have always given — the city its unique and enduring sense of place?

Jennifer and John Griffin both will earn a Master of Architectural Design and Urbanism degree this May from Notre Dame’s School of Architecture.