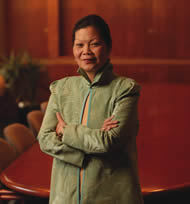 Editor’s note: This is a corrected version of the original story.

Not long after the 2004 Indian Ocean earthquake unleashed tsunamis that brought the catastrophe’s death toll to nearly a quarter million people in 14 countries, Carolyn Woo headed for Asia. Newly appointed as one of the first lay members of Catholic Relief Services’ board of trustees, Woo felt duty bound to see firsthand the disaster response to which hundreds of CRS employees, volunteers and partners would be dedicated in the years ahead.

“When she made the commitment, she promised that if she was going to make decisions about how funds and resources were distributed throughout the developing world, she would be immersed in it,” says Woo’s friend Professor Thomas Harvey, the Luke McGuinness Director of Nonprofit Professional Development at Notre Dame’s Mendoza College of Business.

Over the six years of her term on the CRS board, Mendoza’s Martin J. Gillen dean would travel to Africa several times, once taking along one of her two sons. She toured refugee camps in Afghanistan and Pakistan with particular interest in the work being done to educate women.

Back on campus, she would filter her observations into her talks for at least a month afterward, Harvey says. “With her schedule, to make that kind of commitment to be a good board member really tells you something about her value base.”

Last week CRS announced that Woo would replace retiring CEO and president Ken Hackett, who was stepping down after 18 distinguished years as leader of the Baltimore-based humanitarian agency.

Harvey says Woo likely won the job based on her success leading Mendoza, her expertise in strategic planning, and the management discipline she’ll bring in from the outside. CRS, Harvey points out, operates in more than 100 countries at an annual budget approaching $1 billion. Woo, an architect of the U.N. Global Compact that calls on businesses to operate along common ethical guidelines for social and environmental responsibility, will now work closely with the likes of the U.S. State Department, often administering federal foreign aid dollars while delicately maintaining CRS’ — and her own — faith vision.

Political challenges come with the turf. The agency does not preach Catholicism and serves the impoverished regardless of creed, but it still encounters wariness and outright hostility from religious groups in host countries. “She’s not afraid of any of it,” Harvey says.

In fact, Woo has spent her life navigating cultural frontiers by the light of her Catholic faith. In Notre Dame Magazine’s spring 2011 issue, she wrote about the connections between her life story and her vision for business ethics in the globalization era. Born in Hong Kong, Woo was schooled by Maryknoll nuns, world-traveling women who care about the education of other women in times and places where few others do. The missionary spirit is part of who she is, Harvey says, and CRS will benefit from it. “In a sense, she has been gifted by missionaries and now she’s given an opportunity — not in a proselytizing sense — to be a missionary to the poorest in the world and to bring the sense of hope that Christianity has to offer.”

Woo has fiercely championed a values-first approach during her 14 years at Mendoza while pushing its undergraduate programs to a No. 1 ranking in at least one major survey. The college’s “Ask More of Business” philosophy infuses its students with the notion that personal integrity is the rock upon which effective organizations serving the greater good are built. One instance is Foresight in Business and Society, a required course in which undergraduates pursue in-depth knowledge of a single human problem of their choice.

Wherever Woo’s successor leads the college, Harvey says she’s put a brand on Mendoza that would be impossible to remove — a deeply institutionalized culture of “valued excellence” in which graduates are expected to apply their convictions in successful careers.

They had better be ready in Baltimore. Says Harvey, “Everybody in this building knows you’re a part of something bigger and you better do it right. She’s a ramrod.”