A new McKenna Hall will rise on the spot of the now-demolished old building. Rohr’s restaurant will expand into the longtime Sorin’s dining room in the Morris Inn. And Brownson Hall, one of the oldest structures on campus, will be torn down and replaced with a new traditional French-style building.

At numerous spots on the Notre Dame campus, new iterations are appearing of familiar campus landmarks. For alumni visiting campus, the changes may prompt some double takes and a reorientation. 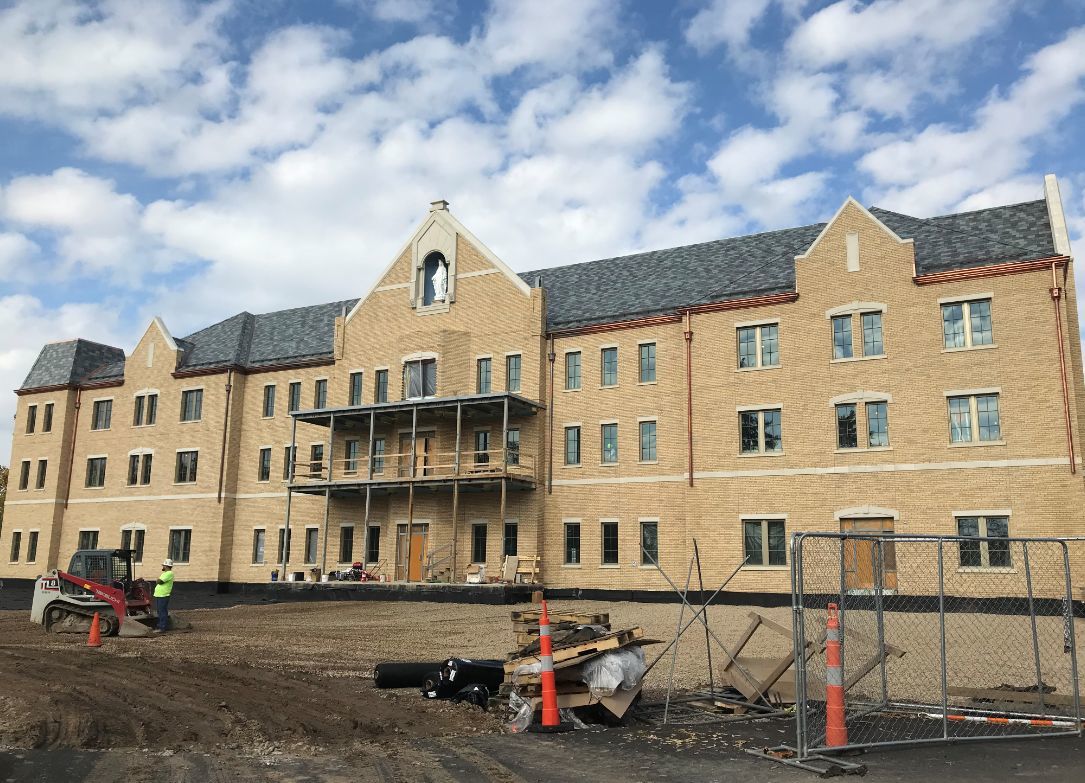 Construction of a new Corby Hall, the traditional home of Holy Cross priests who work on campus, is on schedule to be finished in the spring, says University architect Doug Marsh, Notre Dame’s vice president for facilities, design and operations.

The original Corby Hall (circa 1893) was demolished in 2018 and is being replaced with a modern but similar-looking building of yellow bricks. It will be 71,040 square feet. There will be a front porch, like the original hall. The replacement also will include a second-story front porch, as well as a western porch with a view toward St. Mary’s Lake.

The interior floor plan of the new Corby is different, with the chapel straight ahead from the front entrance, Marsh says. The rooms are bigger, with significantly larger bathrooms. New Corby Hall was designed by Arkos Design Inc., of Mishawaka. 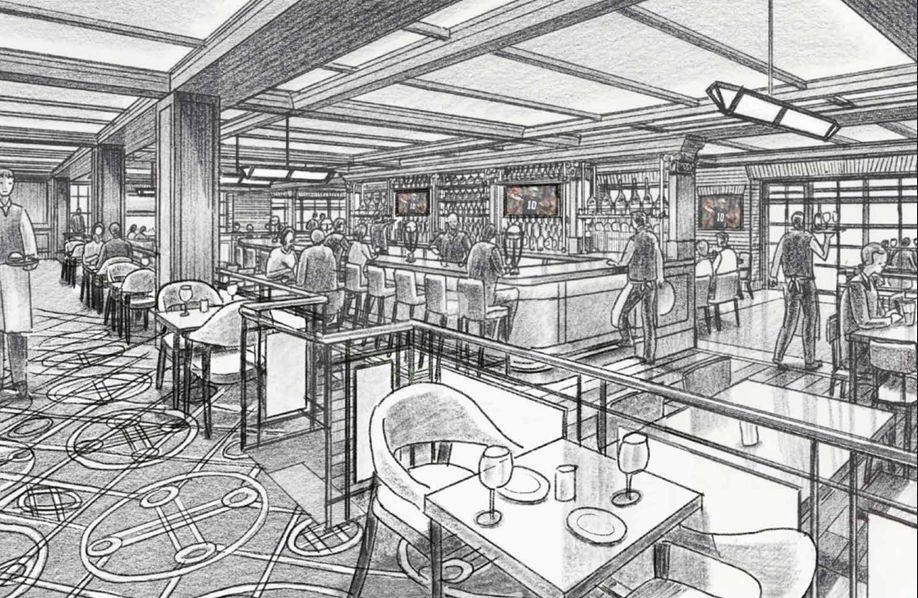 An artist’s rendering of the new Rohr’s at the Morris Inn.

Sorin’s restaurant inside the Morris Inn is no more. It closed permanently on November 3. Generations of Notre Dame graduates remember the quiet elegance of dinners there with parents or other visitors. The dining room, with its wall murals of three different Main Buildings, hasn’t been as crowded in recent years.

Rohr’s will temporarily close November 24 following the last home football game of the season and reopen around May 1 with a “modern tavern concept,” the University announced. Starting November 25, a lobby pop-up restaurant, Rohr’s Test Kitchen, will offer food and beverage service.

The expanded Rohr’s will encompass the full area of the former Sorin’s dining room and the west wall will be pushed out to add space that is now part of the terrace, Marsh said. (The terrace will be expanded too.) Rohr’s bar, the workplace of campus bartending legend Patrick Denis “Murf” Murphy, will move to a location in the center of what was Sorin’s dining room. 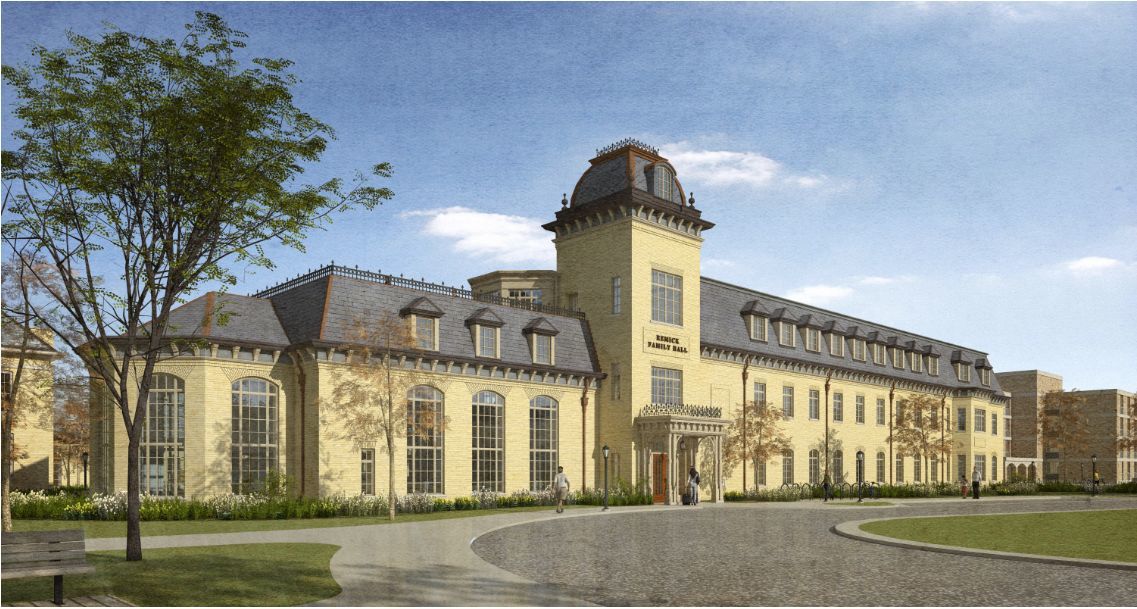 An artist’s rendering of Remick Family Hall, which will open in 2021 on the site of Brownson Hall.

Brownson Hall, a yellow brick building just northwest of the Main Building, will be demolished starting in December. In recent years, Brownson had housed a variety of services, including the Office of Pre-College Programs and the Office of Sustainability.

Built about 1855, Brownson is believed to be the second-oldest building on campus, after Old College. It’s located in what used to be known as the University’s French Quarter, originally home to the Sisters of Holy Cross who served on campus.

The Brownson replacement will be named Remick Family Hall and will provide additional space for Notre Dame’s Institute for Educational Initiatives and for the Alliance for Catholic Education (ACE), which is part of the institute.

The footprint of the new three-story building will be similar to Brownson and the interior courtyard will remain, Marsh says. The new building will connect to nearby Carole Sander Hall. Remick Family Hall, designed by S/L/A/M Collaborative, is expected to be completed in summer 2021. 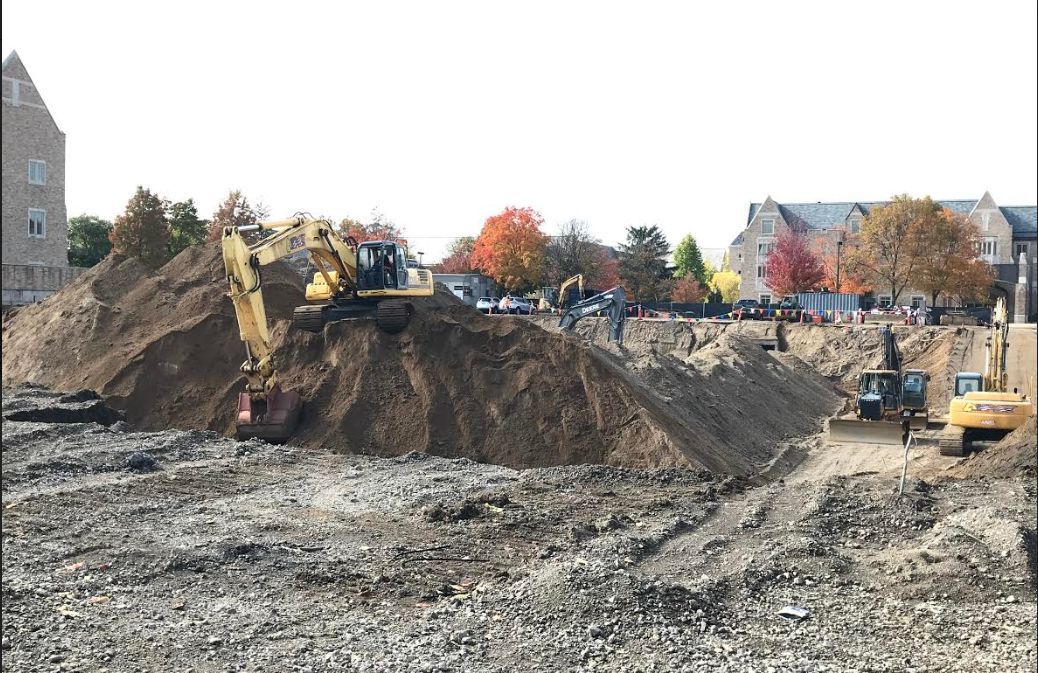 Where McKenna Hall once was and will be again. Photo by Margaret Fosmoe

McKenna Hall (built in 1966 and originally known as the Center for Continuing Education) was demolished this fall. “It was an opportunity to put a more dense building on the last really precious section of Notre Dame Avenue,” Marsh says of the site directly across the street from the Morris Inn.

For those who track Notre Dame campus architectural history, it’s the end of an era. The conference center was designed by Frank Montana, who served on the Notre Dame architecture faculty from 1939 to 1947, as department chair from 1950 to 1972 and established the Rome study program for architecture students. Montana, who led Notre Dame’s architecture program through the transition to modernism, died in 2001.

With the demise of McKenna Hall, all of Montana’s original designs are now gone from campus. A bust of Montana honoring his legacy, a gift of the Class of 1971, the first to study in Rome, stands in the lobby of the new Walsh Family Hall of the School of Architecture.

New McKenna Hall will be of collegiate Gothic design. It will be four stories, plus a basement level. At 85,413 square feet, it will be about 20,000 square feet larger than old McKenna.

In addition to serving as a conference center, new McKenna will be home to the Enrollment Division (including the undergraduate admissions office, financial aid, student accounts and other units), which will move there from the Main Building. The new McKenna is expected to be finished and occupied by fall 2021. It was designed by HBRA Architects of Chicago.

Construction continues south of campus on the new Robinson Community Learning Center, a facility that provides educational programming and other activities for children and adults in the community. The new 12,600-square-foot facility, designed by Alliance Architects of South Bend, will be completed in 2020. The original Robinson center, which was once a grocery store, eventually will be demolished.

The Irish men’s and women’s basketball teams now have a full-time practice facility in Rolfs Athletics Hall. It’s the former Rolfs Sports Recreation Center (built in 1998), which was transformed and then dedicated in spring 2019. The former campus recreation facility was no longer needed after the Smith Center for Recreational Sports opened in Duncan Student Center.

Irish Athletics Center, a 111,400-square-foot indoor practice facility for the Irish football and soccer teams, opened in the summer east of the Joyce Center. It was designed by Integrated Design Solutions of Troy, Michigan. Loftus Sports Center remains in use and is available for other sports team practices and the Notre Dame Marching Band.

The Landings at Notre Dame, a new apartment complex for married and parenting students and their families, is under construction north of Douglas Road near Indiana 933. The complex will include 192 apartments, most containing two bedrooms, and will be managed by a private firm. The complex is expected to be ready for tenants in August 2020, says Mike Hastings, the University’s director of treasury services.

Three other campus construction projects are underway: Dillon Hall is in the midst of a major renovation, to be complete by summer 2020; Johnson Family Hall, a new women’s residence hall being constructed on East Quad, will be finished in summer 2020; and the University and the city of South Bend are building a hydroelectric generating facility on the St. Joseph River dam downtown, to be finished by fall 2021. The facility is expected to produce 7 percent of the university’s electrical needs and Notre Dame plans to lease the facility for 50 years.

Ground is scheduled to be broken in spring 2020 for the new Raclin Murphy Museum of Art, which will be just south of Walsh Family Hall, home of the School of Architecture. The new museum, designed by Robert A.M. Stern Architects, is slated to be finished in late 2022.