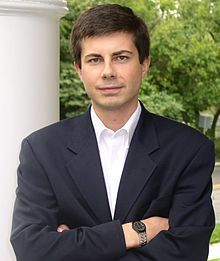 Being asked to speak about innovation in city government after only three months as America’s youngest small-city executive might feel a little like winning the Nobel Peace Prize just after winning the White House, South Bend Mayor Pete Buttigieg joked as he began his presentation March 30 at Notre Dame’s Mendoza College of Business. (Interpretation: You hope your greatest achievements still lie ahead of you.)

Later, when a student asked about his long-term political aspirations, the congenial and self-effacing Buttigieg, who took office January 1 — 18 days before his 30th birthday — noted that his future opportunities will depend on the quality of the job he does now in trying to solve some tough old problems. “Really, all anybody cares about is if I’m any good or not,” he said.

He’s set high expectations for himself. Buttigieg, a Harvard- and Oxford-educated Rhodes scholar whose short consulting career took him around the world advising senior business and government leaders and who campaigned as an innovative, home-grown outsider to city government, noted that “innovation” is an oft-bandied term too blandly associated with “fresh thinking” and technological change.

But the youthful mayor who takes pains to listen to the young also sees power in old ideas. And change, he points out, can be for good or ill. Innovations have to be beneficial and an idea, whether familiar or new, becomes interesting and meaningful when it “addresses a problem that already exists.”

Citing the example of Facebook, Buttigieg also emphasized the importance of human relationships to innovation. The social networking website, which reportedly boasts more than 800 million active users, didn’t invent social networks, he said. Instead, it organized and mapped them and gave them a new space where they could grow. But it wouldn’t have worked if those relationships — and people’s desire to maintain them across the boundaries of time and space — didn’t already exist.

Relationships stand at the heart of innovations that Buttigieg sees transforming the city he now leads. He cited several with strong Notre Dame connections, such as smart sewer technology that’s keeping wastewater out of the St. Joseph River and city funds from going to Washington, D.C., in the form of stiff fines for environmental violations. He’ll be looking to Notre Dame as a resource as he tackles some of the city’s deeply entrenched problems with crime, economic development and abandoned housing.

Education, another complex local issue, is probably “the most important thing I don’t control,” Buttigieg said in answer to a student’s question about education reform — a hot topic on campus this year. What he can do is develop a strong working relationship with teachers, parents, school board members and superintendent Carole Schmidt, who is almost as new to the job as he is, in ways that reflect how much the city and the school system depend on each other. And he can challenge Notre Dame students to volunteer as mentors, which he called the best way for them to have an impact on the South Bend community.
Notre Dame Magazine approached Hizzoner with a few questions after his lecture in Mendoza’s Ten Years Hence series at the Jordan Auditorium.

NDM: You talked about looking to other communities for examples of things they’ve tried to solve similar problems. With regard to the relationship you have to Notre Dame as a major employer and as a huge resource of ideas, are there other models of the relationship between universities and their communities that interest you?

Mayor Buttigieg: There are a whole bunch. Duke and Durham is really interesting. They came together. They created a big alliance and that really is part of what led, as I understand it, to the Research Triangle being set up. So that’s one that’s intriguing to me. I know that when the mayor of Evanston was elected, she actually baked cookies and brought them over to the president of Northwestern as a way to show that it was time to move past some of the town-gown issues they’d been seeing there.

MB: No (laughs), not yet, but I do really value the relationship, because you know for a long time Notre Dame was really focused on the world — and still is — but Notre Dame was less concerned with the city and more concerned with its place as a world university. Now I think Notre Dame as an institution understands that its success is tied up in South Bend’s success. And I have felt that I have a great partnership right now at Notre Dame. I’m very excited to see what grows from it.

NDM: Are there particular areas where you might look to the University for input?

MB: You know, there’s a whole bunch, it’s everything from those little innovations I showed you, so just engaging the intellectual talent at the university, to working with the university to make sure we have the right kind of land use and that the neighborhoods unfold in a good way, to inviting different classes of students to take South Bend as a case study and see what they can help us see about ourselves. Lastly, just economically, everybody here’s a stakeholder, and so making sure we’re paying attention to the concerns of employees and the staff and the students are all things that we can always work to get better at. But I’m delighted that we’re getting off on the right foot with the University, and I’m excited to see what will come of it.”