One afternoon, after quietly vomiting in a handicapped bathroom, I walked out of my office into a street filled with strangers, leaned against a hotel building and cried. Tourists wearing “I Love NY” T-shirts and professionals in suits and sensible shoes stared as they walked by me, but I was past shame and embarrassment.

Soft from a Southern upbringing, I must have looked like a limping bunny to the aggressive colleagues I had inherited as an account executive at an ad agency in New York. I was one of three relatively inexperienced managers, responsible for one very all-consuming corporate client undergoing layoffs.

We became different people after fielding hundreds of emails, 8 p.m. emergency requests and decision changes. My colleagues responded to the stress by sacrificing their personal lives and demanded I do the same. Months of round-the-clock emails and many late nights brought about strings of nauseating migraines. Too busy to stay home, I was forced to learn which office bathroom was most private.

To my friends and family, it appeared I was just accepting abuse. Even my business-minded, traditional father advised me to quit, but I couldn’t do it. My confidence was tied to the job that was making my life miserable.

The stress moved into every aspect of my life. I was isolated, depressed and exhausted. Every sound of a jackhammer or honk of a horn was an assault on my fragile psyche. Yet my face remained expressionless just like the strangers I despised.

I began to wonder if I could make it in New York. 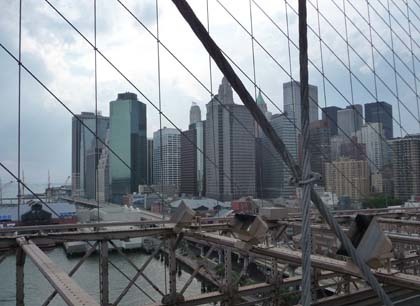 Finally, I found a sliver of hope at work. A new employee interrupted my team’s cycle of overpromising, working ourselves to death and bullying each other. Quiet but self-possessed and confident in her abilities, she was senior to many and smarter, too. On a business trip with her, I confessed what I experienced at work. Instead of being shocked she said, “They probably don’t even know how you’re feeling. By acting calm you save face, but nothing will change. Remember, they are people, too. Do you think you’re the only one that’s afraid?”

Her advice didn’t fully persuade me until a suffocating July day when I was walking through the Financial District. Sweating and terrified of the work to come, I chose a different route to the office to avoid the crowds. I walked swiftly toward the Millennium Hotel, a chic stop for business travelers. Passing its grimy loading garage, I was struck by a freezing blast of air conditioning carrying the scent of gardenias. The smell of construction work, food carts and the faintly dirty smell of cars and people faded away. The aroma of flowers and the cold breeze recalled memories of being a kid in Hawaii, standing in front of fans, chasing salamanders and collecting leis. I slowed my pace to prolong the paradise, but it quickly dissolved. I was back in New York.

I circled the block and returned to the garage to experience the tropical mirage again. This time, I wasn’t alone. A tall man in a suit had slowed outside the garage as the cold, fragrant air hit his body. Eyes closed and faced turned skyward; he inhaled deeply and for a moment looked serene. One person after another imitated the first man. They felt it, too. “So you’re human after all,” I thought with relief.

With the secret revealed, I saw the humanity of New Yorkers more each day. I didn’t have fewer worries or more friends, but I understood I wasn’t alone in the struggle.

The subway system, normally a bastion of silence, isolation and indifference, bolstered my optimism. Instead of reading, I observed other passengers to catch little moments of vulnerability.

I watched a bored-looking man sitting next to a woman reading a romance novel. Apparently intrigued by her book and without other entertainment options, he peered around to see if anyone was looking his way. Satisfied he wouldn’t be caught, he read over her shoulder. Reading at the same pace, their eyebrows lifted and lowered in unison. The woman paged through the book unaware she had a reading companion.

A petite woman in a suit, so involved in thinking about an argument I imagined she had with her co-worker or husband, unconsciously gestured and mouthed words as she replayed a conversation in her mind. Two other women glanced at her with knowing smiles instead of disapproval.

I learned from the snippets of life appeared in the subway and on sidewalks as weeks passed. Less concerned with what people thought, I found my voice at work and revealed my strengths. Soon, I was working under the mentor who had changed my perspective. I earned a promotion and found myself in a place to share my experience and advice with new hires.

Each day I returned to the subway to be reminded of the complete strangers who had helped me hang on. One hot morning I joined the ever-tardy fashion and creative professionals on their trip to work. Women in trendy heels and tailored outfits surrounded me. Out of bed for hardly 30 minutes, I was barely presentable. Yet, I felt confident and comfortable among the pack of strangers with glamorous armor and straight faces. I knew who they were: New Yorkers who would close their eyes and smile at the hint of a cool breeze.

Katie Hicks is a freelance writer and social media guru living in the New York City area. Keep up with her on CharmingHicks.com or contact her directly at Khicks9@gmail.com.