Sports nerds are of two kinds. One group knows every statistical detail about their team. The other knows about sports that most people have never heard of. I’m in the latter group, and here’s my top nine list.

Shin-kicking. The 17th century sport, also known as “hacking” and “purring,” was part of the Cotswold Olimpicks, celebrated in England and first held in 1612, as one of the precursors of the modern Olympic Games. The sport depends, as the name suggests, on two people kicking each other’s shins until a winning score is achieved, as decided by the “stickler” or umpire.

Kabaddi. One of the simplest of all sports. It requires no special equipment, just an open space, a straight line and two teams who cross into the other team’s territory and try to tag their opponents without being captured. Hugely popular in the Indian subcontinent, it was demonstrated at the 1936 Olympics, but never again. The men’s sport has had its own World Cup since 2004 (always won by India).

Dwile-flonking. A classic British pub sport in which no one ever really knows the rules and no one remembers the score. But it has something to do with two teams, one trying to avoid being hit with the dwile, a beer-soaked cloth.

Bubble football (or, in the United States, Bubble soccer) aka Zorball. Imagine playing soccer while inside a giant bubble from above your head to your waist, so you can run into people without risk of injury. A brand-new sport for an injury-conscious age.

Octopush. Underwater hockey played with sticks, a puck , two goals and snorkel masks. Not to be confused with water polo, which depends on finding horses that can swim well. 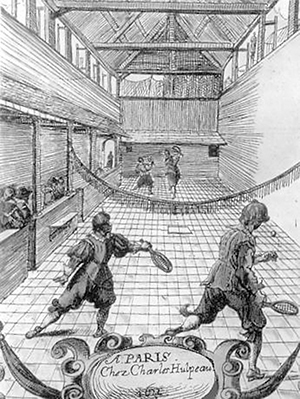 Real tennis aka Royal tennis aka Jeu de paume. The kind of tennis played by Henry VIII, referred to by Shakespeare and still played in a few places. A real tennis court is an architectural marvel, with sloping penthouses off which the ball can be bounced, a buttress intruding into the playing space and an asymmetrical floor. The oldest surviving court in England is at Hampton Court Palace outside London and dates to 1620.

Ring the bull aka the Bimini Ring Game aka Wallhooky. A popular pub pastime that requires swinging a bull’s nose-ring on the end of a rope to catch onto a hook. Sounds easy but demands cunning technique.

Pelota aka jai alai. Reputedly the world’s fastest ballgame, played in the Basque country in Spain, this sport is rather like a version of squash but with curved baskets (called xistera) attached to the arm. The United States has yet to win a gold medal at the World Championships.

Fives. Squash without a racquet but using a glove. Multiple variants, each named after the English public (i.e., private) school where it originated: Eton Fives, Rugby Fives, Winchester Fives.

— Peter Holland is the McMeel Family Chair in Shakespeare Studies and associate dean for the arts at Notre Dame.